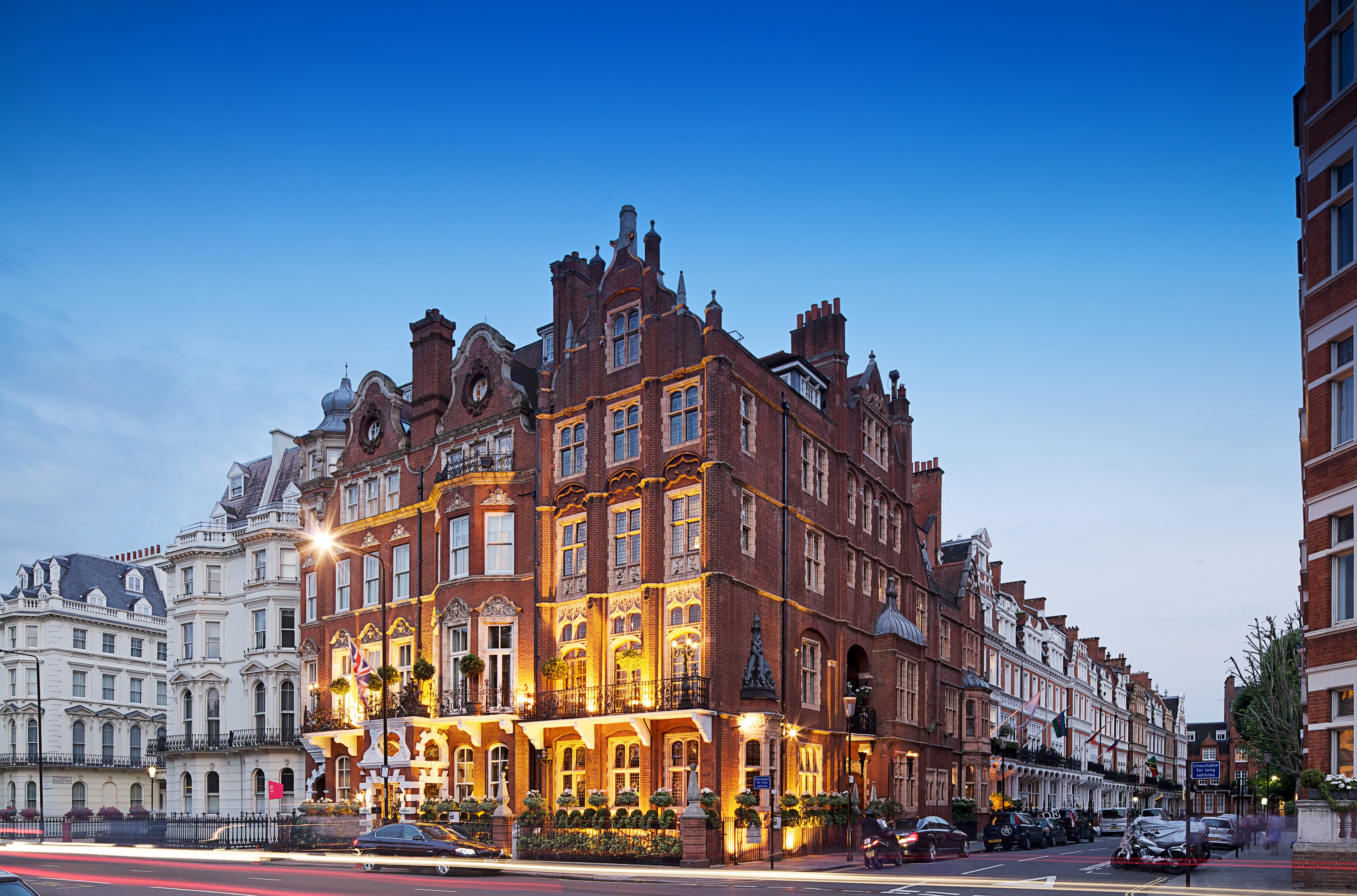 For millennia, London has been one of the most important metropolises in the world, meaning millions of people from across the globe have been drawn to its streets. As such, there’s quite a robust hotel scene in England's capital city, from some of the most luxurious properties that have hosted royals to edgier boutiques in some of the more far-flung neighborhoods. This year happens to be one of the bigger ones for London hotels—there have been a number of important openings already, with even more to come during the second half of the year, as well as major renovations that have seen some of the most historic hotels refreshed. So if you’re planning a trip to London, you’ll have plenty of new options to consider. Here, we look at 13 of our favorite design-focused new and renovated hotels in London, from hot spots like the Soho House clubs to classics like the Milestone.

AD100 designer Jacques Garcia is known across the world for his sultry aesthetic, and his latest London hotel certainly fits the bill. The 39-room L’oscar is named as a nod to Oscar Wilde, whose debauched lifestyle often inspires the designer, while also being a reference to the old Hollywood glamour of the Academy Awards. Housed in a former Baptist church in Holborn, the boutique hotel, which opened in June, is filled with lush textiles in rich hues, like reds and golds in some guest rooms and earthy greens and purples in others. (Note the peacock-motif silk screens, the seven-story chandelier in the staircase, and the Lalique butterfly taps in the baths, too.) loscar.com

Soho House’s latest private members’ club in London, which opened in April, is its largest space in the city, filling a massive building that used to be the BBC’s headquarters. While White City House’s amenities (like the 24,000-square-foot gym, the roof pool, and the lounge) are typically reserved for members only, guests of the club’s 45-room hotel are permitted entry, making for a compelling reason to book a stay. The decor takes cues from the building’s heritage, going for an elegant midcentury-modern vibe. whitecityhouse.com

Originally opened as the Hotel Russell in London’s literary Bloomsbury neighborhood in 1898, the Principal recently underwent a $113 million renovation, reopening in April of this year. The building, designed by famous Victorian hotel architect Charles Fitzroy Doll, retained its iconic terra-cotta façade, but the interiors were revamped by designers Tara Bernerd and Russell Sage. Each of the 334 luxurious rooms and suites features contemporary furniture in a neutral palette, while public spaces are filled with a more pizzazz, like the marbled lobby with grand arches (most of which is original to the building) and the dark and moody Fitz’s Cocktail Bar. phcompany.com

London’s most famous boutique hotel, opened in 1922, is in the midst of a three-year renovation that just saw the completion of its newly redesigned suites and extended-stay residences this summer. Housed in what was once a private Victorian mansion, the Milestone, which sits just across from Kensington Palace, has 56 individually designed accommodations by Beatrice and Toni Tollman, a mother-daughter design team from the Milestone’s parent company, Red Carnation Hotels. The suites, in particular, riff on fun themes, such as a Meghan Markle–inspired room with a leopard-print carpet, and one designed around a vintage Hermès scarf collection. milestonehotel.com

Kettner’s Townhouse has given a second life to the iconic and somewhat louche Kettner’s restaurant, which chef August Kettner (who reportedly worked for Napoleon III), opened in 1867 as one of the London’s first French eateries. Though it had lost some of its glamour during the second half of the 20th century, the restaurant has since been revived as part of a 33-room hotel belonging to the Soho House group that opened in January. The restaurant’s elegant period details have been restored, and the rooms take on the look of French boudoirs. kettnerstownhouse.com

Architecture takes precedence at the Dixon, an Autograph Collection Hotel, which was named after the Edwardian building’s designer, John Dixon Butler. Formerly a courthouse and a police station in Southwark, the hotel, which is scheduled to open this fall, retains many of its original design elements, most notably in its wood-paneled atrium lobby and lobby lounge, though it’ll also be filled with furnishings by contemporary British designers and works by local artists—art, too, will play a large part in the property’s programming. The 193 rooms will be more modernized, featuring brown-and-blue palettes with brass accents. thedixon.co.uk

Named for two historic trading guilds with the City of London, where the hotel is located, Vintry & Mercer will nod to its former industries—wine and textiles—when it opens later this year. For wine, there will be a robust program at the hotel’s three restaurants and bars—the Asian tapas Vintry Kitchen, the Mercer Roof Terrace, and the speakeasy-style bar Do Not Disturb. Textiles will play a main role in the decor of both public spaces and rooms, from velvet curtains and headboards to custom linens. vintryandmercer.com

Opened in April in a former textile factory in Whitechapel, the New Road Hotel has an interesting backstory: It’s owned by three Bangladeshi brothers whose father once worked in the building. The property is the definition of industrial chic, with exposed brick, concrete, and metalwork pairing with brightly colored modern furniture. The rooms, albeit well designed, are on the smaller side, with guests encouraged to spend time out and about in the city or in the communal spaces like the library, the bar, or the cereal cafe. newroadhotel.co.uk

The ever-luxe Corinthia in Westminster has been popular with the posh crowds since it opened in 1885—though it did serve a few stints as a government building during the World Wars and for decades in the second half of the 20th century. It was christened the Corinthia in 2011, and in June this year it launched its new residential-style London and Garden suites, with the former inspired by “modern living” in the city and featuring early-20th-century works of art, while the latter takes on the English garden not only with lush decor but also live greenery. corinthia.com

For its first foray outside of the United States, the Standard Hotel Group is converting a 1970s Brutalist office building near King’s Cross into its latest property, a 270-room spot with a restaurant and a bar. Details are still pretty scarce on the interiors of the hotel, but it can be assumed the hotel will be as swanky as the others in the Standard portfolio. As for the exterior, renderings show that while the concrete façade will remain, a two-story addition to the top of the hotel will be a sleek metal-and-glass construction. standardhotels.com

Riding the wave of creativity in London’s South Bank, the new, minimalist Bankside, scheduled to open in October, will be an art-centric hotel that caters to both visitors and locals. Visitors, of course, will stay in the 161 residential-style rooms and suites decorated by former set designer turned interior designer Dayna Lee, while the public spaces were designed with the neighbors in mind. In addition to lounge areas where locals can set up shop and work for the day, there will be an art gallery and an artist-in-residence program, too. banksidehotel.com

In 2000, five 18th-century townhouses in Bloomsbury were combined into the Academy hotel, and the property just debuted a multi-million-dollar renovation spearheaded by Alexandra Champalimaud and her team. Inspired by the Bloomsbury Group, a group of writers and intellectuals who worked in the neighborhood (including Virginia Woolf and John Maynard Keynes), Champalimaud created an elegant look that feels at once modern and classic: Think muted earthy hues meet metallic elements. theacademyhotel.co.uk

Built in 1887 as the Cadogan, this historic luxury hotel in Chelsea, which once hosted the likes of Oscar Wilde and socialite Lillie Langtry, will reopen this year as the Belmond Cadogan after a $48 million renovation. The sophisticated property will have 54 rooms and suites decorated in soft pastels, a spa suite, a fitness suite, and a number of dining options, including a high-end British restaurant and a tea lounge. (https://www.belmond.com)

RELATED: Chic Paris Insiders Will Be Heading Here This Fall

Have You Heard of a Navajo Hogan?