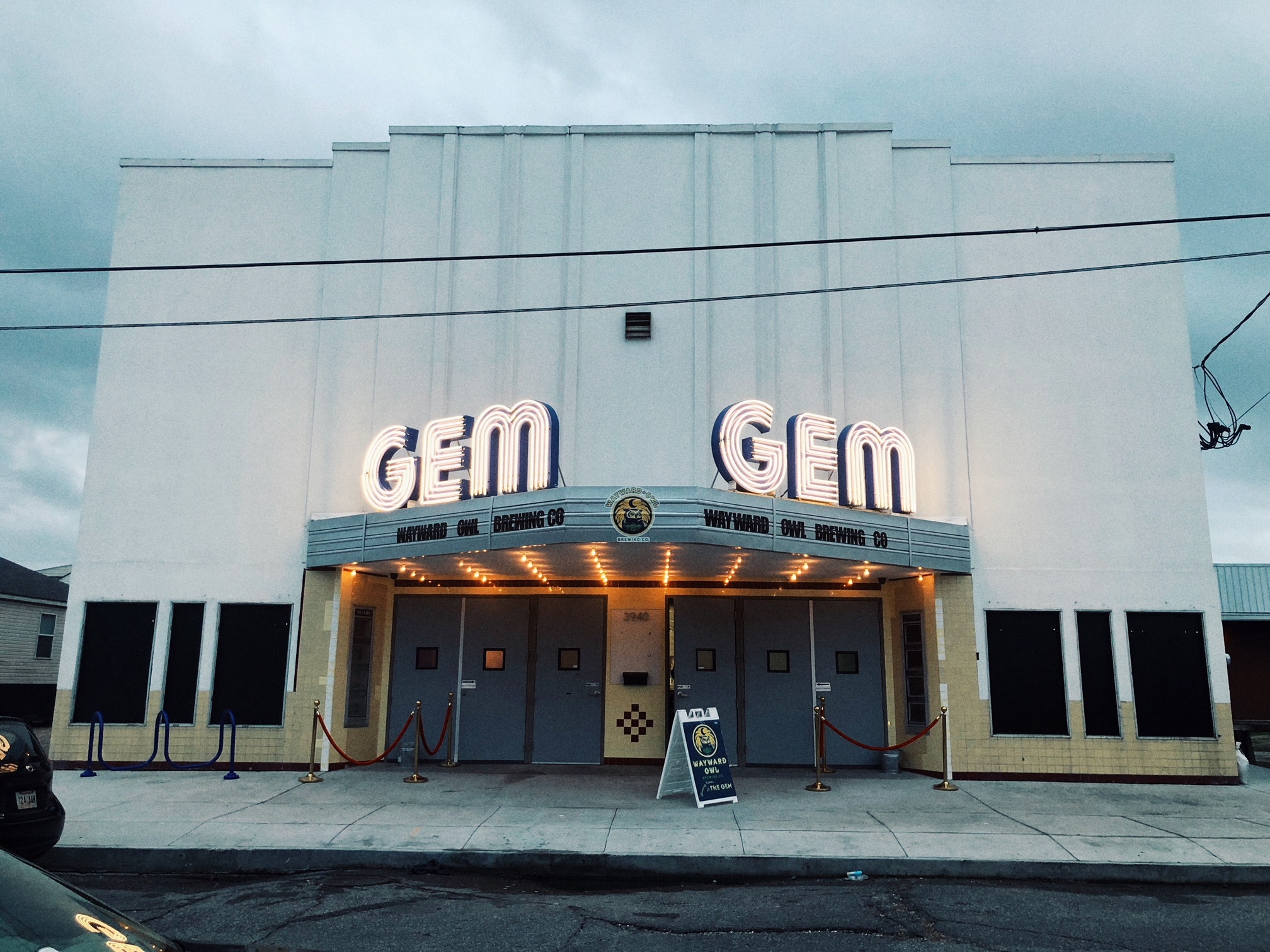 Spanning from the roaring twenties to the old South, first-rate American eateries are breathing new life into these grand spaces. Here, AD uncovers the history of these cinematic haunts and what their new food-focused occupants are up to now.

The Milton Cinema, a movie theater 15 minutes south of Boston, showed movies such as Jaws and West Side Story over its 50-year history and wrapped up its final film showing in 1987. Almost three decades later, Novara opened its doors as a 5,500-square-foot neighborhood eatery serving northern Italian fare. The lively restaurant maintains the original theater’s 23-foot ceilings and displays old cinematic posters from Gone with the Wind, Footloose, and other classics on its walls. Novara usually runs black-and-white films on a wall in its main dining room. novararestaurant.com

Wayward Owling Brewing Company opened in 2016 and is set in the original Gem Theater, the last African American cinema to be built in New Orleans, dating back to segregation. Stationed at the apex of Broadmoor, Central City, and Mid-City, the Gem Theater opened in 1951 with heavy masonry construction and deep pilings, helping to maintain the integrity of the building. However, in 2014, the city deemed it necessary to bulldoze the structure after an oak tree climbed through a window and threatened to cave in the ceiling. Justin and Kristin Boswell rescued the space and turned it into a family-owned brewery; they replaced the ceiling and flooring, and the rest stayed. Today, food trucks, ranging from Haitian to South Korean beer food ChiMek to Colombian cuisine, park outside the brewery to offer craft brew drinkers a nourishing bite. The Wayward Owl building is today a National Historic Landmark. waywardowlbrewing.com

Carbon Arc Bar and Board, Chicago

The Pershing Theater opened in 1918 as a German-language film house on Chicago’s Lincoln Square. In the 1960s it was purchased and changed to the Davis Theater. Chicago’s Carbon Arc Bar and Board opened in 2016 in the historic movie house, which today holds National Landmark status. The theater is still in operation, but guests can exit the lobby and head straight into the cocktail bar and full-service kitchen offering new American fare. davistheater.com

Set in Gastonia, a suburb of Charlotte, this old mill town still embraces this original Art Deco cinema, which was built in 1927. The theater closed its doors in the late 1980s and today hosts the Webb Custom Kitchen, which features the same architecture the cinema had in the twenties while serving up American contemporary fare. “What attracted me was the old bones of the architecture,” said Webb Custom Kitchen’s owner, Jim Morasso, in a phone call. “The cinema helps define Gastonia’s architecture.” Morasso opened Webb Custom Kitchen in 2016 and has one of the original projectors in the restaurant, which once sat in Greta Garbo’s Stockholm apartment, and the original proscenium that Morasso restored and hand-painted himself. webbcustomkitchen.com

JSM & Associates Recognized as One of Central Florida’s Top…

University of Pennsylvania Stuart Weitzman School of Design to Honor…