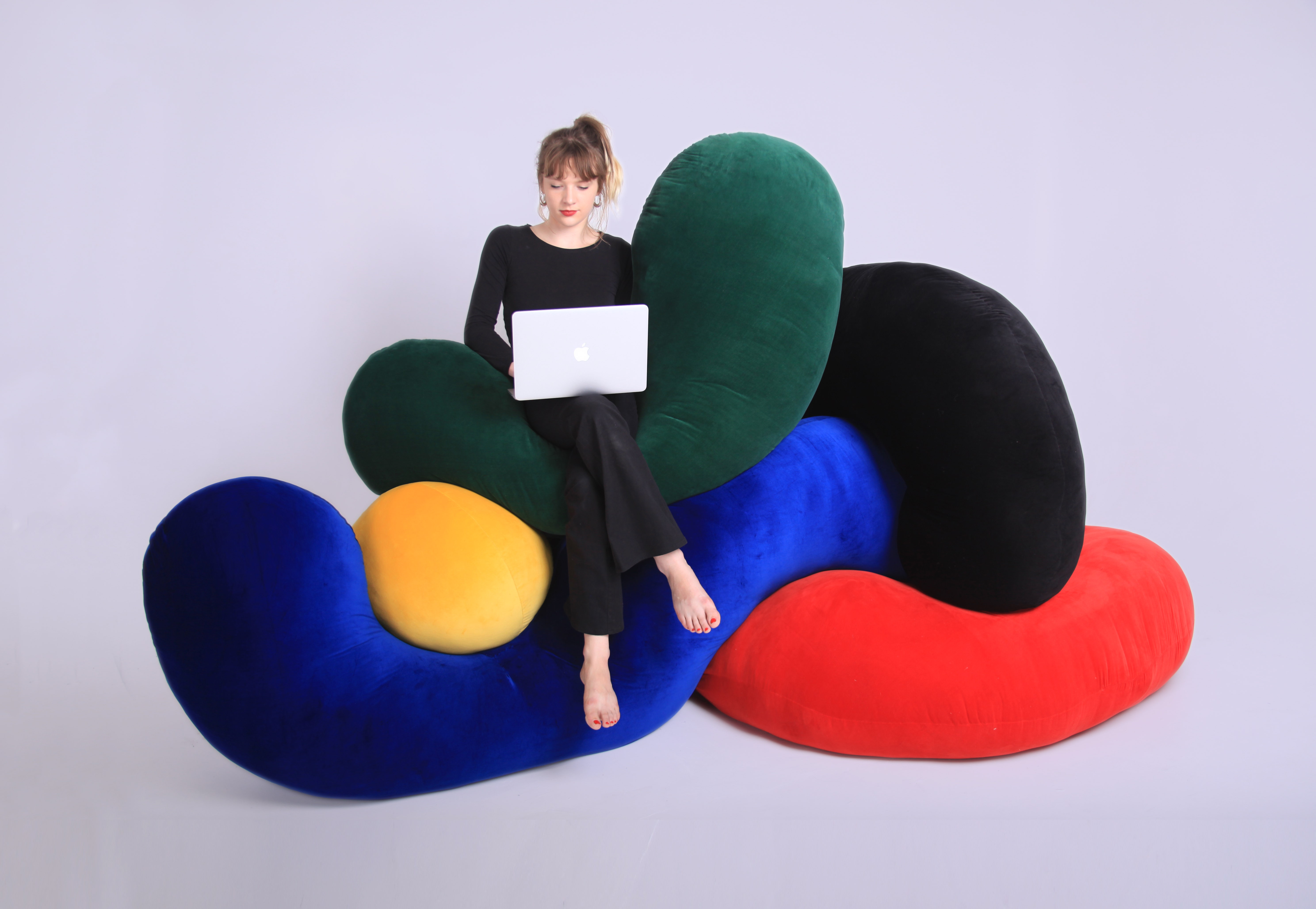 Tucked away at the far end of the gargantuan Salone del Mobile trade fair—which measures 3,710,00 square feet from end to end—SaloneSatellite is well worth the trek. Taking place during Milan Design Week, the show, which has been going on since 1998, is an annual celebration of emerging design talents under 35 years old. Over 10,000 designers have begun their careers there, and this year 650 designers and schools showed their wares. Key themes were traditional craft and a new look at sustainability. Here are AD PRO's highlights.

Meaning "block" in Arabic, Kutleh was established by architect Rula Yaghmour and her construction worker partner. Yaghmour has developed a technique of bonding marble off cuts—mostly sourced from Jordan and Palestine—into blocks with adhesive and pressing, which are then carved into bold, Henry Moore–esque shapes. At Satellite she presented a chair and vases made using the technique. She aims to reuse bits left for dead in salvage yards: “I always say there is a lot of life in the graveyard,” says Yaghmour. kutleh.com

This Japanese lighting designer crafts delicate lighting out of washi paper, steel wire, and brass. The paper is so fine that the light shines through, emitting radiating geometric shapes across the floor. Having given up a career in medicine to work in design (“I had a strong passion for making things,” he says), founder Baku Sakashita studied at the prestigious ECAL design school in Switzerland and founded Studio Baka last year. This is his first time at Satellite. “This is the biggest show of its kind in the world and many star designers start in the world right here,” he says. studiobaku.jp

“The idea is to create emotional connections between furniture and people, and play with the boundaries between art and design,” says Koa Pham. He and his chums Madeleine Duflot and Ania Marcianiak set up Ilco while studying at Central Saint Martins in London, and Into-form is their first project together: a groovy modular system made of five velvet-covered foam shapes. The foam was made in Warsaw (Marcianiak’s home town) and stitched together in Strasbourg (where Duflot is from), and the promo tote bags are from Pham’s homeland of Vietnam. @ilco_design

Aufgabe Null answers all your millennial greenery needs. Set up by two architecture graduates, Hilaria von Saldern and Nikita Suerhoff, the Tropicalia range consists of glass cubes and a series of brass grid boxes that are inserted inside. Avocado seeds can grow in the smaller cradle, while the brass grid can be extended for fast-growing cuttings to become a vase. They are all handmade in Berlin. “We want to keep it that way,” says Suerhoff. Sustainability is a key concern for the duo. “People don’t have to buy a plant from Thailand, as growing cuttings is all about sharing.” aufgabenull.de

Okkim Studio produces steel stools using an experimental version of traditional Korean lacquering called ott. Each work features between 15 and 20 layers of color, which are sand papered and polished to achieve the marbled effect. The shapes are inspired by the piles of stones that villagers traditionally leave outside temples in Korea. Stones are carefully piled up to signify a prayer and balance is key: just like these stools and side tables, which can ostensibly be stacked. The veiny color palettes are inspired by Korean countryside. okkimstudio.com

Textile designer Yuri Himuro presented her two-sided Bloom blankets at the show. Each one features the flowers of a plant on one side and the leaves of said plant on the other. They are produced in Gifu—one of Japan’s traditional textile capitals—using age-old jacquard techniques. While the blankets are perfect to take cover under, they also make rather epic wall hangings. h-m-r.net

From Tragedy to Triumph, How One Entrepreneur Hooked Major Retailers