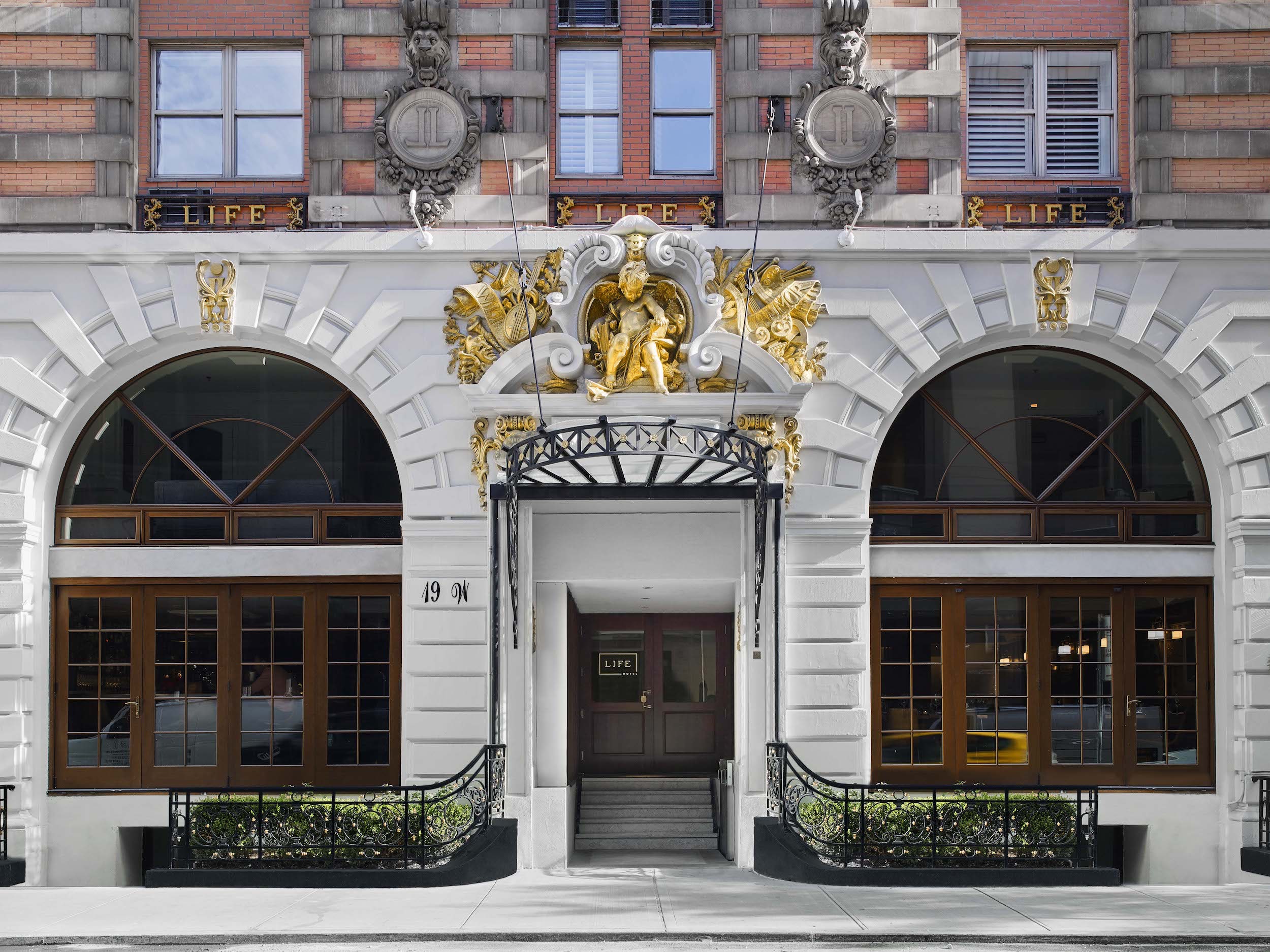 In more ways than one, media offices are fairly lean these days, with little need for such lofty real estate of yore. But that doesn’t mean their parent companies' storied buildings aren’t put to good use; a handful of former media offices, from household magazines to local broadcast, are the subject of new tenants: one-of-a-kind hotels. Across the country and across the pond, here are some of the newsiest boutiques to book.

Two blocks from the French Quarter, New Orleans’ latest hotel ties nine historic warehouses together with 196 guest rooms, all under one name, The Eliza Jane, in a nod to Eliza Jane Nicholson who, in the late 1800s became the first woman publisher at the buildings’ original occupant: The Daily Picayune. Leafy interiors touch on the property’s early herstory, with leather ink-colored headboards, exposed brick walls, and hints of brass (the views over Magazine Street are just luck).

The Beaux Arts tower at the corner of Chicago’s North Michigan Avenue and Wacker Drive has hosted a roster of occupants since opening in 1923, including the studios of two radio stations and, for the better part of a decade, the Crain Communication building. Developers refurbished the storied tower as the lavishly decorated 452-room luxury lifestyle hotel, LondonHouse Chicago.

The Portland Press Herald never folded like the building’s new Frette linens—it simply moved in 2010, allowing the original 1923 tapestry brick and stone building to start a new chapter as the Press Hotel. Branding itself Portland’s first-ever boutique hotel, designers were on the nose with history throughout 110 guest rooms, each featuring a proper writing desk. The former city room is now the Inkwell Bar, too, and the newspaper’s editors helped select historic headlines for the hallway wallpaper (read, and sleep, between the lines).

Norman Rockwell once lived and worked inside the historic building designed by Carrère and Hastings, once home to the offices of Life magazine. And its new tenant hasn’t forgotten any names, reviving the locale as Life Hotel last year with 98 guest rooms. The latest addition, unveiled just months ago, takes a page from history: A subterranean space discovered during renovations was rumored to be a secret lounge for the magazine’s staff during Prohibition. Now called Gibson + Luce, it’s a speakeasy-style bar once again.

Opened in 1889, Aspen’s Hotel Jerome is old news, and a fixture resort of the Rocky Mountain town. After a massive redesign in 2012 by the local architecture firm Rowland and Broughton and designer TAL Studio, the same team is set to unveil the resort’s latest headliner. This June, the 140-year-old building next door, home to the printing presses of The Aspen Times back in 1904—and still bearing its vintage printed name on the façade—will fold into the resort as a new event space, featuring an underground bar (a fitting bolt-hole for the historic mining town).

The paint hasn’t yet dried across the pond where the soon-to-open White City House is the latest installment of the Soho House legion. Despite the brand’s exclusive tenor, this Grade-II listed address has mainstream roots as the old BBC headquarters in West London. Now with 45 rooms, midcentury style vibes with the former station’s heyday—the wall panelling features the original designs from the station’s reception area, and a 1960s-inspired bar incorporates textiles and furniture by Tibor, a designer who once created patterns for the BBC.

It’s impossible to overlook the grand Edwardian edifice, one of the highest points of the city, and once the offices of The Scotsman newspaper. After a careful renovation, the landmark building opened anew as The Scotsman Hotel, a cozy remake with 69 guest rooms set within two towers, all of which are privy to a key address in the middle of Edinburgh’s Old and New Towns. The newspaper’s former reception area, now a brasserie and popular bar, keeps decorum with restored wall panels and marble pillars which recall the newspaper’s reign for nearly a century within the same halls.

RELATED: The 7 Most Historically Significant Hotels in the World