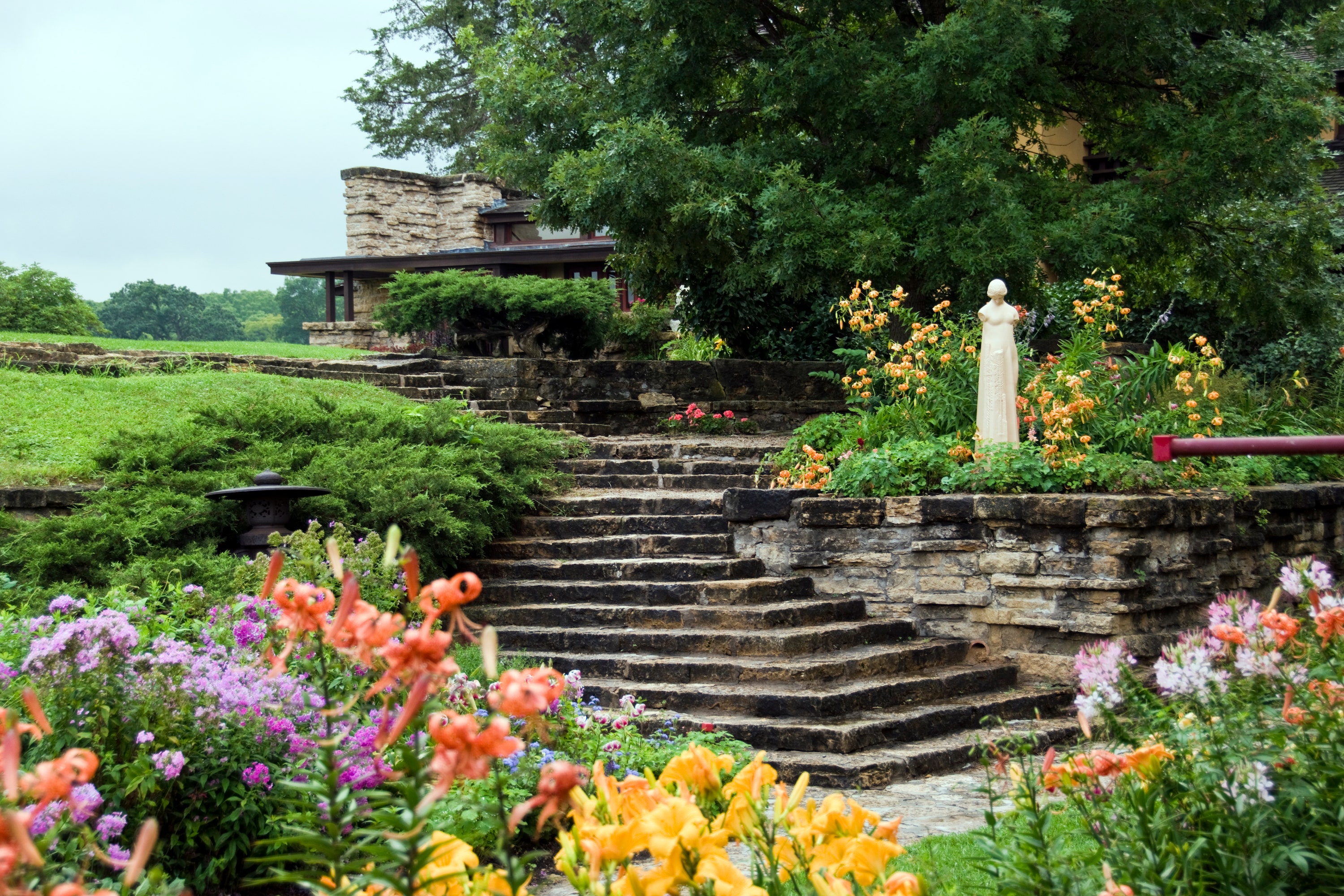 Frank Lloyd Wright is arguably America’s most treasured architect, changing residential architecture forever with the introduction of the Prairie style. The sought-after designer took commissions across the country—and even the world, designing the famous Imperial Hotel in Tokyo (among others in Japan)—throughout most of his life. One of Wright’s most iconic works is Taliesin, his own home in Spring Green, Wisconsin. The architect spent his childhood in the hills of the state, where his mother’s Welsh family settled, and was largely inspired by the landscape. It makes sense, then, that the architect would end up building his own home, studio, and architecture school here in 1909 on an 800-acre estate, which he named Taliesin (Welsh for “shining brow,” as Wright’s residence on the property, also named Taliesin, sits right on the brow of a hill). Herewith, we discuss seven facts you may not know about Wright’s northern home.

1. Wright built Taliesin as a refuge from a romantic scandal.

In 1889, the 21-year-old Wright married Catherine “Kitty” Tobin, with whom he would have six children, and the family resided in the fashionable Oak Park suburb of Chicago. The architect would soon start an affair with Mamah Borthwick Cheney, the wife of his neighbor and client. In 1909, Wright and Cheney abandoned their families to travel Europe for a year together. Upon their return, they were ostracized from Chicago society, so they moved back to Wisconsin and built Taliesin to start their lives anew.

Cheney and Wright’s romance ended quite violently. On August 15, 1914, a servant at Taliesin went on a murderous rampage, setting fire to the private living quarters of Taliesin and killing seven people, including Cheney and her two children, with an axe. The house was gutted. Wright, who was out of town during the massacre, immediately rebuilt Taliesin, yet the home completely burned down again in 1925, when faulty wiring sparked. Again, Wright rebuilt, and thus the version of Taliesin that exists today is known as Taliesin III. You can actually see some evidence of the fires: While most of Wright’s art collection was destroyed in the blazes, some pieces survived, blackened—the architect included some of these burnt works in Taliesin III. You can also spot some charred ceiling beams if you look carefully.

When the architect was burning brush on his property, he accidentally torched the Hillside Theater of his architecture school. As he did for his residence, Wright rebuilt. (You’ll notice that at his second home, Taliesin West in Arizona, the property is filled with pools and fountains. Perhaps he was worried about fires?)

4. The architect’s first works were built on (or near) the estate.

Chicago architect Joseph Lyman Silsbee designed the Unity Chapel for the Lloyd Jones family, Wright’s maternal family, in 1886. The then 18-year-old Wright unofficially apprenticed for Silsbee, designing the interior of the chapel, which is located just off the estate. But Wright’s very first solo project was actually on the property itself. In 1887 his aunts Jane and Ellen Lloyd Jones commissioned the young architect to design the structure for their Hillside Home School, which Wright eventually demolished. A second building he designed for the school in 1901 still stands on the property today as part of the School of Architecture at Taliesin.

“I think this reinforces Wright’s use of natural light and integrating the landscape into his designs,” says Kieran Murphy, historian at Taliesin Preservation. Wright’s aforementioned love of the hills of Wisconsin certainly had a hand in fueling his long-lasting obsession with nature, so it’s not too surprising that he wanted to take in the landscape from wherever he stood in the house. For the record, the interior of the home is about 21,000 square feet, so there’s quite a lot of room for windows.

6. He designed the home without gutters because he wanted icicles to form in the winter.

“I wanted a home where icicles by invitation might beautify the eaves. So there were no gutters,” writes Wright in An Autobiography. “And when the snow piled deep on the roofs and lay drifted in the courts, icicles came to hang staccato from the eaves. Prismatic crystal pendants sometimes six feet long, glittered between the landscape and the eyes inside.”

Up until his death, Wright was always modifying Taliesin. There are 200 documented changes—from major ones, like the addition of rooms, to minor ones, like painting walls—and there were likely many others. One of the last changes to the property was the conversion of a chicken coop into a dormitory for the architecture school. We promise it’s much nicer than it sounds.