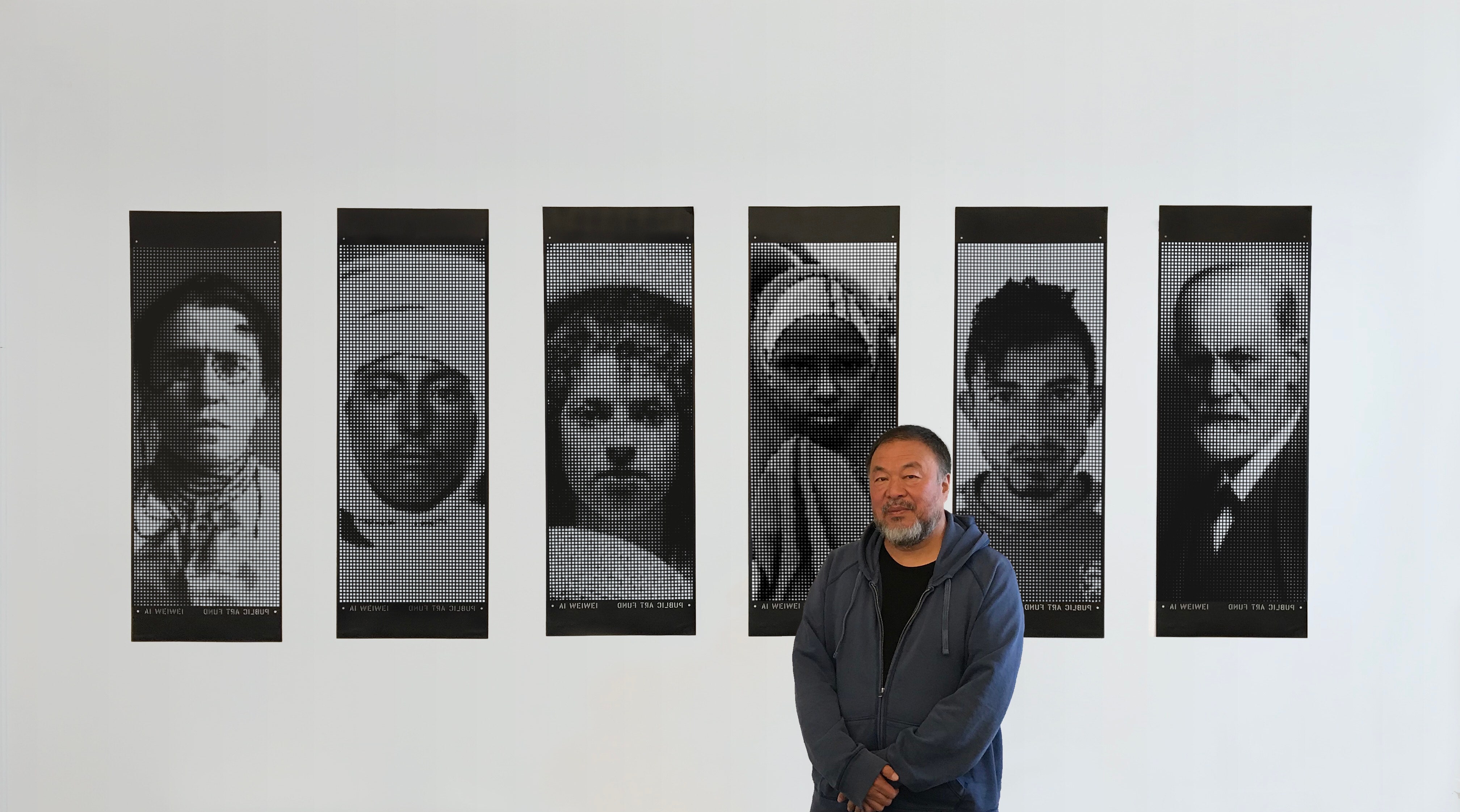 World Refugee Day, June 20, comes at a particularly poignant time this year, just a few weeks after disturbing reports emerged that, under President Trump's "zero tolerance" policy, the United States was separating children from their families as they attempt to cross the border. We're living in an undeniably unsettling and deeply traumatizing moment in America's history, though we'd be remiss not to remember that this isn't the first instance of horror facing displaced people, which is something that artist Ai Weiwei makes a point to highlight in his work. And never one to miss the opportunity to do good and give back, Weiwei is partnering with eBay and Public Art Fund to auction off six limited-edition works of art, whose entire proceeds will be donated to the United Nations High Commissioner for Refugees, the International Refugee Committee, and Public Art Fund.

Included in the sale on eBay are six portraits of refugees and immigrants that have been laser-cut onto vinyl in the style of a streetlamp banner. Each portrait is available in a limited quantity—just 500 of each have been produced—and will be priced at $750, or $4,500 for all six. Considering that Weiwei's work has fetched as much as $26.8 million at auction, the three-digit price tag seems modest, not to mention that all of the proceeds are being given to charity. The faces depicted on the banners are both historical and contemporary, chosen to represent a wide span of time, emotion, and global reach. Included are portraits of unknown immigrants taken by amateur photographer and Bureau of Immigration clerk Augustus Sherman at Ellis Island, formal portraits taken by Weiwei's studio, famous immigrants from history, and a few that are the result of spontaneous photographs the artist captured while visiting refugee camps in Kenya and Iraq. Their faces are rendered in the absence of space, created by the laser cutter, and meant to represent the ambiguous, in-between status that plagues refugees.

"The work is directly related to the history of human migration and aims to raise awareness of the humanitarian crisis happening today," said the artist in a press statement. "It is a reminder of the artist's responsibility to defend the understanding that all humans share the same meaning of life. I have always believed that to be the foundation of our aesthetic practice."

The banners are part of a larger exhibition staged by Weiwei and Public Art Fund last year called Good Fences Make Good Neighbors, whose title was chosen in reference to a folksy proverb cited in Robert Frost's poem "Mending Wall." Featuring more than 300 works placed around the five boroughs of New York City, the project was a collective installation that looked at how cages and fences might be a symbol, both socially and artistically, and call out the role they play in dividing us. The artist created interventions and site-specific installations around the city in spaces that typically display advertising like bus shelters, ad platforms, and lampposts, and chose specific locations based on their historical and political significance. Some were placed outside of Trump Tower, while others were placed outside Weiwei's former home in the city where he lived as a recent immigrant.

“This is a powerful series of portraits that not only embodies Ai's determination to bring attention to this urgent global issue but also enables collectors to bring an aspect of Public Art Fund's landmark exhibition 'Good Fences Make Good Neighbors' into their own homes,” said Public Art Fund director and chief curator Nicholas Baume. “Ai's generosity is unparalleled, and this is a unique opportunity for collectors to not only own a single work by the artist but to own an extraordinary installation.”

How C.Z. Guest Turned a Simple Hallway into a Uniquely Fabulous Space

All Your Bed Needs Is a Lumbar Pillow