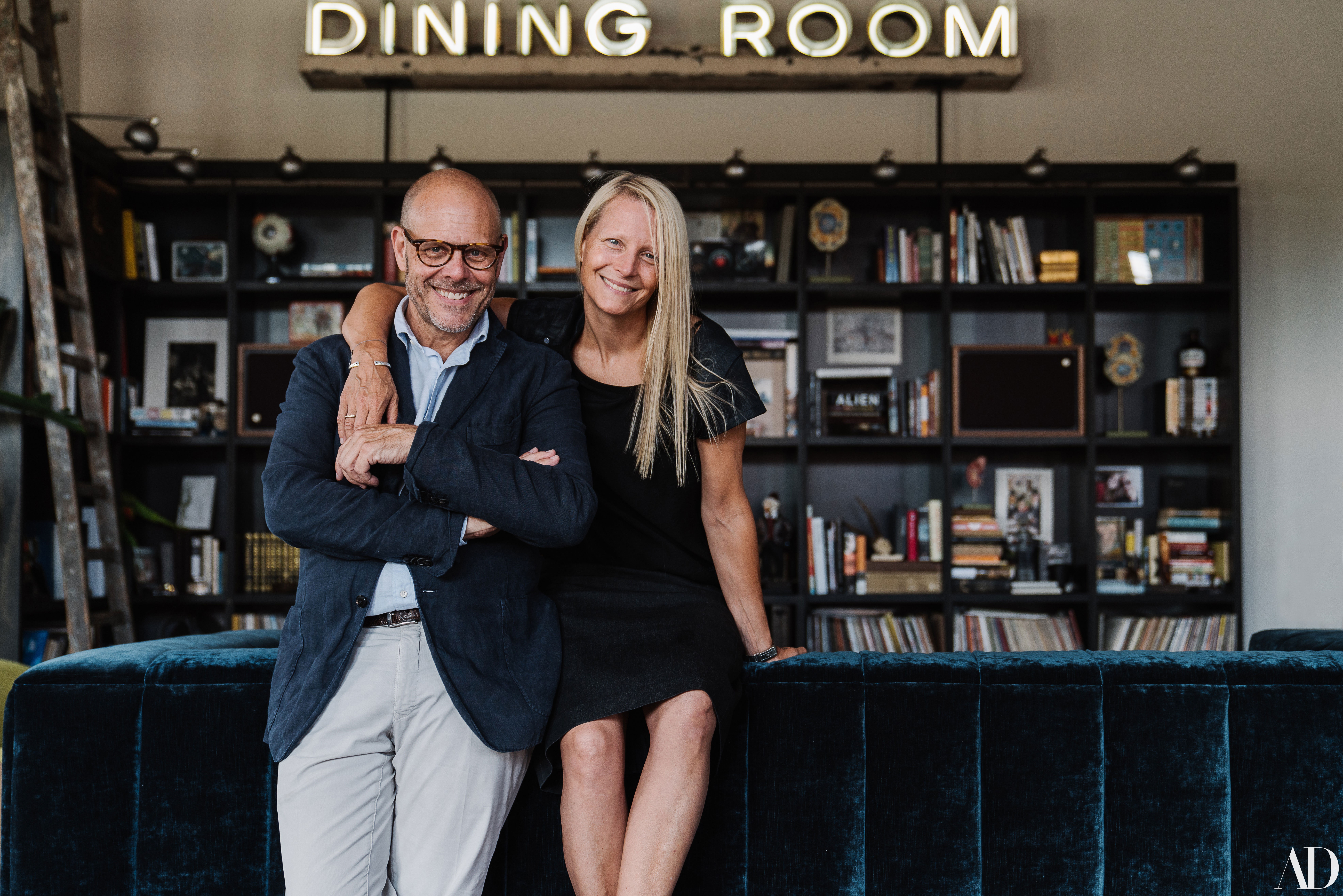 A few years ago, as a form of congratulations on a job well done, mutual acquaintances started calling Elizabeth Ingram to tell her that Alton Brown liked a number of the restaurants she had designed in Atlanta—which include Beetlecat, Marcel, Superica El Tigre, and now, Golden Eagle.

But there was just one problem: "She didn't know who I was, so that was meaningless to her!" Brown good-naturedly laughs. That may seem hard to fathom for anyone who has ever tuned in to the Food Network in the past two decades: Brown is the creator and host of Good Eats, and host and main commentator on Iron Chef America and Cutthroat Kitchen—and from there, his culinary-based curriculum vitae continues. But this month, in front of friends and family in Charleston, he'll add one more title to his résumé: that of Ingram's husband.

Perhaps Ingram's initial ignorance in regard to Brown was due to her own level of success: In the restaurant, bar, and residential design industry, Ingram has been a highly sought-after designer for as long as Brown has been on television; last year she even released her own furniture line, which includes elegant stools, chairs, and sofas. Despite her revolving door of projects, Ingram found time to attend a signing Brown was holding for his book, EveryDayCook, in October of 2016.

Brown gave Ingram his card, initially hoping to enlist her help in redoing the living area of his office. But soon, he had a bigger need for her services: the renovation and decoration of a corner-unit apartment in Marietta, Georgia, which Brown says he bought without knowing what the interior looked like. "I closed within ten days and I was like, 'Oh my God, I may have made a really bad decision here.'"

In a twist of fate, however, the purchase may be one of the best decisions he ever made. After emailing Ingram to let her know "there may be an upgrade in our working relationship: from a small apartment in an office to a big loft," the now-couple embarked on a seven-month renovation—and the start of an accidental courtship—that began in summer 2017.

"We hauled ass," says Brown, who was an omnipresent part of the project, but away filming for portions of it.

But the distance, when it was there, didn't defer a relationship from slowly blossoming between the pair. "We benefitted from Pinterest, text, and getting to know each other that way," says Ingram, and Brown agrees: "She dropped a lot of lines from obscure movies that I love, like one from Blade Runner one day," he says.

Brown's ability to let Ingram forge ahead in the design process and the pair's aptitude to work collaboratively together also helped a romance burgeon between them. "Clients that hire you and want to wrestle over every detail are missing the point, unless you're just being a personal shopper," explains Ingram. "And he's too busy for that. He trusted me as a professional and as a creative professional, which he also is."

"Elizabeth is a very good listener, and she learned a lot about me," Brown says, speaking now as both client and fiancé. "She never goes into a place and does her own thing; it's always mission-oriented. She brings her sensibility—whether it's a restaurant or a residence—and she really tries to make it about the person occupying that space. Her taste was never really mentioned. It's more about her trying to align it with what my taste is."

This, according to Ingram, is the philosophy she follows when designing residential projects versus a commercial space. "With a restaurant, it's more me trying to tell the story of what it is, or weave a tale of what the story of the space is. Residences are a little more difficult because people will say, 'I want it to be serene or comfortable or pretty or relaxed.' So I will ask questions like, 'What do you like to collect?' or 'Where have you traveled?' or 'What are your interests?' Because obviously, if it's their house, they need it to be their house. It doesn't need to be another Elizabeth Ingram house."

But it did eventually become Ingram's house—very literally, in fact. She now resides in the three-bedroom loft-style apartment she initially designed for Brown. "At some point, meetings turned into dates," he says. "I'm not going to lie—and I can't put my finger on when it was—I started looking forward to seeing her more than the space."

The couple was engaged in April 2018, a little over a year after they wrapped up work on the apartment. "At some point, did you start thinking you might live there?" Brown asks Ingram directly. "Yes," she admits, but still, ever the professional, she designed the space with Brown in mind. Is there anything Ingram would have done differently, had she known she, in fact, would be inhabiting the apartment one day? "No, there isn't," she says.

That's something—like so many things—the couple agrees on. "Quite frankly, I think we'll be a good married couple because we already know what that collaboration looks like," Brown says. "Even if it hadn't ended the way it is ending, it would have been a delightful process. I love this loft."

And he's not just saying it because the woman he hired to design it will soon be his wife, either. "I've never lived in a place where in the beginning of the day, I don't want to leave, and at the end of the day, I can't wait to get home. And it's not just because of who is going to be there."