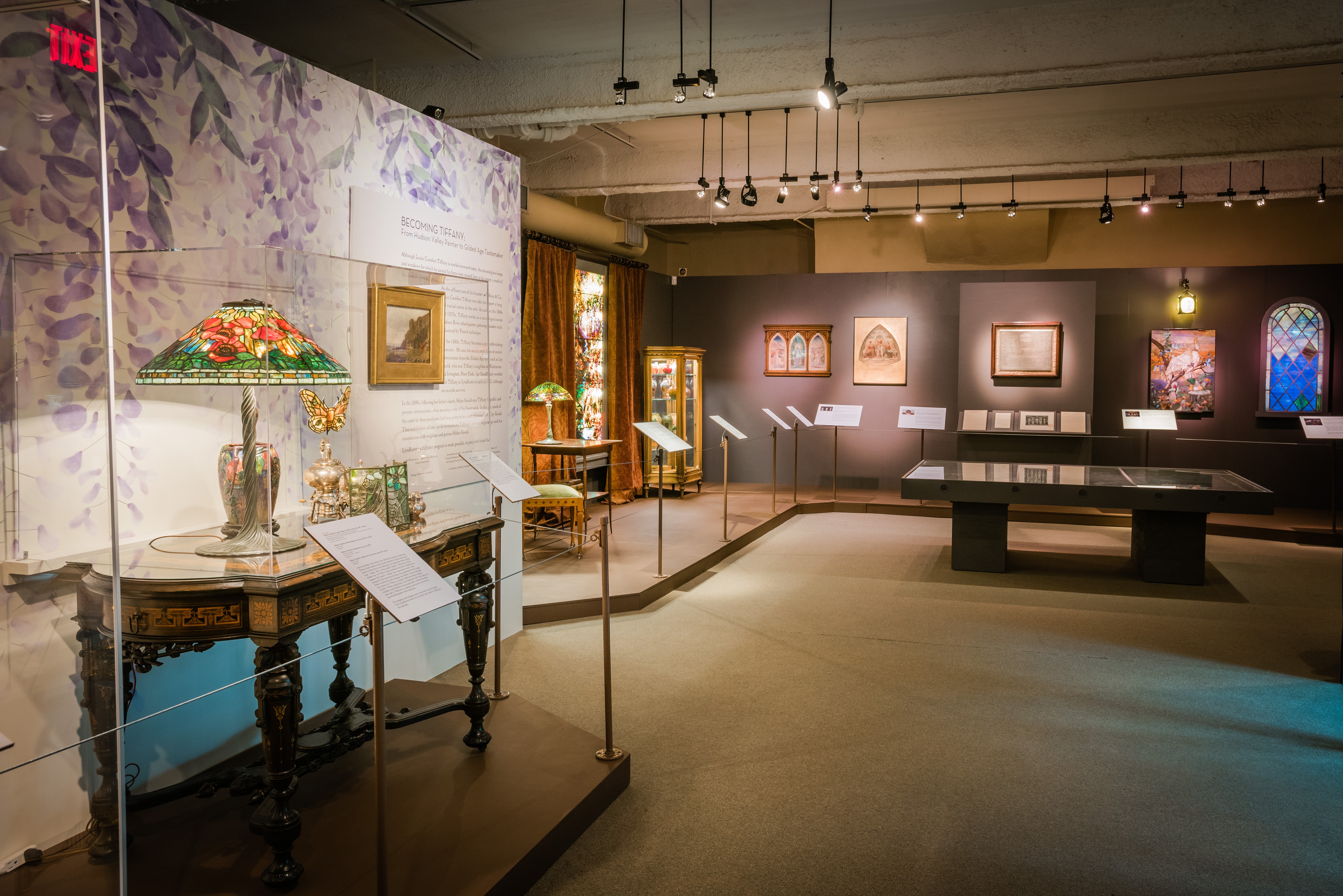 Though Louis Comfort Tiffany's stained glass has long been an icon of American craftsmanship, he began his artistic career in the more traditional medium of painting, an output often overlooked in favor of his glasswork. Lyndhurst, the Gothic Revival mansion in Tarrytown, New York, on the Hudson River, is offering a special exhibition on artist Louis Comfort Tiffany through September 24, “Becoming Tiffany: From Hudson Valley Painter to Gilded Age Tastemaker,” which explores not only his connections to the mansion but also little-known facets of his career.

Lyndhurst itself was commissioned in 1838 from architect Alexander Jackson Davis as a country villa for New York City mayor William Paulding. Its next occupant was New York merchant George Merritt, for whom Davis doubled its size. After Merritt's death, railroad magnate Jay Gould purchased the estate as his summer home in 1880, staying there until he died in 1892. Gould’s older daughter, Helen, then took charge of the property, renovating it in part to add a sewing school for local women. When Helen died in 1938, her sister, Anna, Duchess of Talleyrand-Perigord, continued to maintain Lyndhurst as her country home, bequeathing it to the National Trust for Historic Preservation at her death in 1961.

Son of Charles Lewis Tiffany, founder of Tiffany & Co., Louis Comfort Tiffany lived both in New York City and Irvington, New York, where he was a neighbor of Jay and Helen Gould. Tiffany used his connections to wealthy and prominent Gilded Age socialites, like the Goulds, to build his business; Helen Gould commissioned some of his most important work.

Tiffany's connections in the Hudson Valley afforded him more than just commissions, too: Several paintings on display at Lyndhurst reveal the artistic inspiration he found there. The artist's early mentors included his summertime neighbor, the Hudson River School painter Samuel Colman, Jr., who had studied in France. He also formally studied with landscape artist George Inness at the Eagleswood Military Academy in Perth Amboy, New Jersey.

While still in his teens, Tiffany did several grand tours of Europe, studying with genre painter Leon Charles Adrien Bailly and absorbing the works of Gustave Courbet, Barbizon and Orientalist painters, and contemporary photographers. Tiffany’s early paintings depicted the Adirondack Mountains in upstate New York, industrial scenes along the Hudson River, and the integrated fishing community of Sea Bright, New Jersey, as well as subjects he saw abroad, such as the Mediterranean coast, streets of Morocco and Algeria, and open-air markets in Europe.

His undated painting The Reaper, owned by the National Academy of Design and his presentation piece on election to the academy, is reminiscent of works by Winslow Homer and Barbizon painter Jean-Francois Millet. And the Egyptian city of Cairo, where he contracted measles in 1870, is the subject of a watercolor, painted in 1872, that he sent to the 1876 Centennial Exhibition in Philadelphia, and his undated View of Cairo, a pastiche of old and new mosques there. He returned to Cairo in 1908, sailing along the Nile and producing a series of watercolors.

The exhibition also features works by Tiffany collaborators Candace Wheeler—who formed her own company, Associated Artists, to sell textiles and other decorative work—and Lockwood de Forest. On display are three Associated Artists textiles from the Mark Twain House in Hartford, Connecticut, all with a Japanese swimming carp design. There is also furniture by Tiffany client de Forest, whose business Tiffany purchased in 1908; these pieces include an 1880s hexagonal carved-teak table and Japanese-style chest.

Helen Gould’s personal ties with Tiffany are handsomely illustrated throughout the exhibition; she added her own Tiffany pieces to works purchased by her father. Shown with an early 20th-century Tiffany Studios poppy filigree table lamp, from a New York private collection, is a Tiffany Studios early 20th-century, moth-shaped, favrile glass screen from Lyndhurst, which was used to cut glare from incandescent bulbs in eyes accustomed to dim gaslight.

Among the windows Helen Gould commissioned from Tiffany Studios was an almost 10-foot-high window (reproduced here in half-size) that depicts a doe drinking from a stream, a scene from Psalm 42, and was installed in her Fifth Avenue mansion. Preparatory watercolors by Frederick Wilson for Tiffany Glass & Decorating Company, owned by Lyndhurst and also on display, were done in the early 1890s for Gould family memorial windows in the Dutch Reformed Church in Roxbury, New York, Jay Gould’s birthplace.

Some of the most unusual items in the exhibition relate to Helen Gould’s decision to underwrite New York University’s 1899 library and hall of fame at its former Bronx campus (now occupied by Bronx Community College), designed by Stanford White of McKim, Mead & White. This featured Tiffany stained glass and interior finishes; its most important window was destroyed by a firebomb in 1969. On display at Lyndhurst are correspondence between the school and Tiffany Studios about the cost of the project, and a Gorham silver plaque, depicting the library, that was presented by NYU—whose law school Gould attended—to her as a wedding gift in 1913.

Besides offering details of Tiffany's career, such documents also make an interesting clarification about the Gould family's patronage. According to Katherine Malone-France, vice president for historic sites at the National Trust for Historic Preservation, “Based on new documentation provided by Gould family descendants, we can establish Helen Gould as one of Tiffany’s important and abiding patrons. In the past, much of the credit had been given to her more infamous father, Jay Gould."