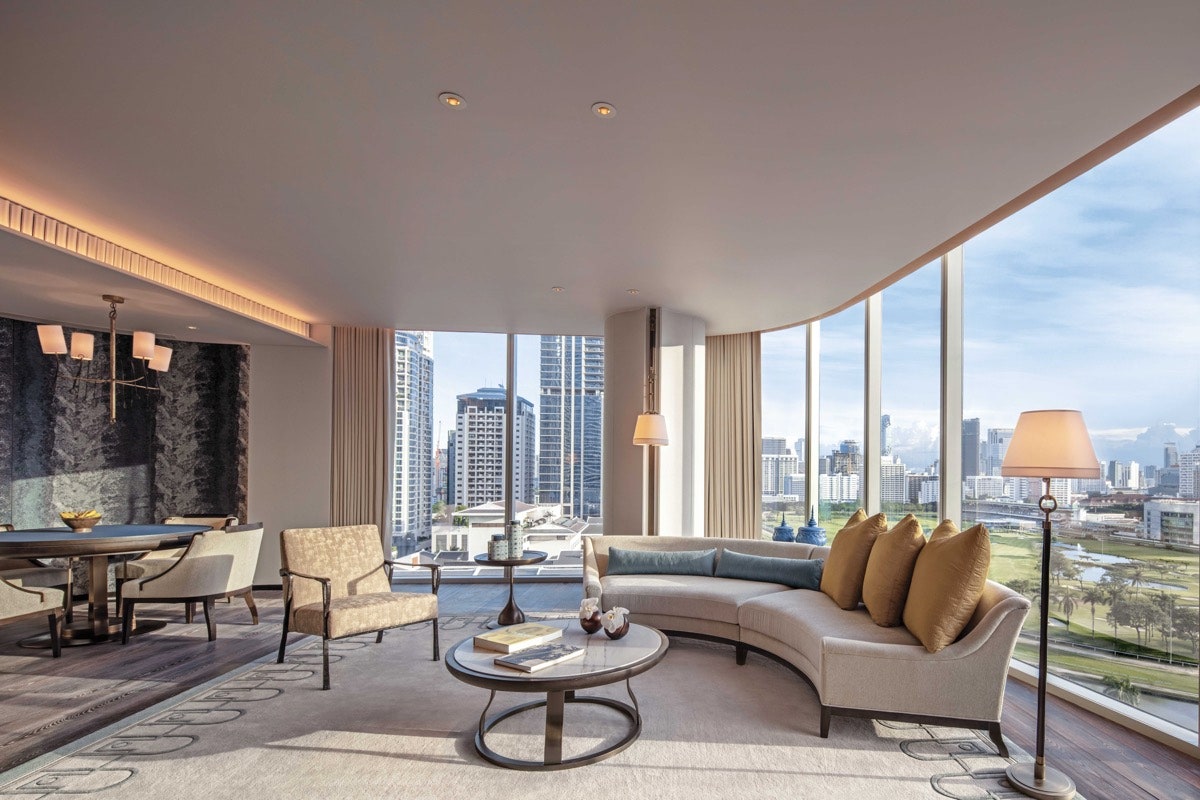 Clad in a trim suit, André Fu is not quite lounging, his back to a dazzling panoramic view of Thailand’s steamy capital—the personification, I realize later, of his design philosophy of “relaxed luxury.” We are at the Waldorf Astoria Bangkok, and the Hong Kong–born and based, England-educated architect and founder of AFSO sits in an armchair he designed, an upholstered number with an expansive seat and a staid tilt to its rounded back. Several of these are scattered around the glass-wrapped Peacock Alley, where up to 70 patrons can while away air-conditioned afternoons over tea and assorted pastries.

Located on the 16th floor of the Hilton-owned Waldorf Astoria Hotels & Resorts’ first venture into Southeast Asia, the lounge is just one of the spaces in the hotel that allude to the 1893 design of New York’s classy old Art Deco dame, the beloved Waldorf Astoria New York—albeit in clever ways that pay homage to local Thai culture.

With 171 rooms and suites, two restaurants, and a lounge by Fu, the 430,000-square-foot property in the Magnolias Ratchadamri Boulevard development has been seven years in the making. The hotel occupies levels six through 16 and 55 through 57 of a 60-story tower (which also includes 316 luxury apartments) that a team of architects from Gensler, DI Designs, and the Beaumont Partners conceived as the three-dimensional petal of a magnolia flower. A 2014 addition to Bangkok’s skyline, the tower evokes movement thanks to the twist on its uppermost floors. Here, at the hotel’s three highest levels, are an additional restaurant and two bars by New York–based design firm AvroKO.

For Fu, then in his mid-30s and riding the success of the Upper House in Hong Kong (2009), Shangri-La Hotel in Tokyo (2010), and The Fullerton Bay Hotel in Singapore (2010), there was no competition, no pitch—just a short meeting in his home city—before developer Magnolia Quality Development Corporation Limited enlisted him for the hotel’s interiors.

As for the brief, “we had the juxtaposition of three completely different things,” says Fu in his crisp British accent. “The organic architecture, the Waldorf legacy, and the tribute to Thai culture.” Fu says his first steps are always pushed by a “mental collage.” He explains, “You know roughly what you’re going to start with, and then you piece them together and draw a little map. Eventually it becomes a holistic experience.”

Syncing the interior architecture meant reducing rectilinear or symmetrical lines, which would have clashed with the modern building; instead, curves dominate. One of the more prominent Art Deco elements is an arched promenade connecting two sides of seating situated along the facade in the 110-seat Brasserie restaurant, also on the 16th floor. “That’s similar to a passageway on the ground floor of the New York hotel,” Fu notes.

In Peacock Alley, Fu points out the lounge’s gilded centerpiece, a deconstructed version of the Manhattan Waldorf's famous clock, whose motif is also abstractly reflected in custom carpet. A closer look at the clock reveals elaborate twists in the bronze metal—a nod to the graceful hand movements integral to Thai dancing. “These are very subtle things,” says Fu. “I never interpret something very literally; it’s the spirit we’re trying to capture.”

Later that day, I take an express elevator from the lobby to the hotel’s highest floors, where William Harris, AvroKO’s lead principal on the project, describes his firm’s muse as “a very elegant, very stylish well-traveled artist in her 70s with a massive loft in downtown SoHo.” Her loft, he says, is brimming with antiques, furniture from designer friends, and one-offs. Likewise, so are the Bull & Bear restaurant (seating 80), The Loft bar, (seating 70), and the intimate Champagne bar (seating 34), found on floors 55 through 57 respectively.

In the Loft, which we access by pressing an intricately carved wooden sculpture activating a hidden door, I spot vintage leather rocking chairs, wood carvings from local Thai artisans, and custom half-moon sectional sofas expansive enough to encourage interaction with strangers. There are also vintage paint tools—tins filled with brushes, tool carousels, kits of pastels, pencils, and watercolors, and bottles of tinted-glass inkwells. “The dirty process of creation is really beautiful,” says Harris, who studied art—some of the framed pieces on walls are his own. Walls also display photographs of Thailand’s exquisitely dressed Queen Sirikit Kitiyakara, who has a local museum, the Queen Sirikit Museum of Textiles, dedicated to the fashions she wore on international diplomatic missions.

Thai history also manifests in a dramatic chandelier, this time in the form of more than 800 hand-cast glass feathers, which represent a giant, mythical birdlike creature, the Garuda. According to Hindu and Buddhist legend, the bird spends eternity killing its archenemy, the snakelike Nagas.

Shuttered for a three-year renovation, the Waldorf Astoria New York is expected to reopen in 2020. Meanwhile, properties such as the Bangkok hotel, which it inspired, add up. Since 2008, Hilton has added 30 properties to the Waldorf Astoria Hotels & Resorts umbrella. Rapid expansion means another 20 are underway, all planned to seduce the five-star hospitality market with the most exclusive addresses, targeted programming, and, of course, thoughtful design.

Live Like a King in Derek Jeter’s Castle-Like Mansion for $14.5 Million

Women in Design Get Their Due