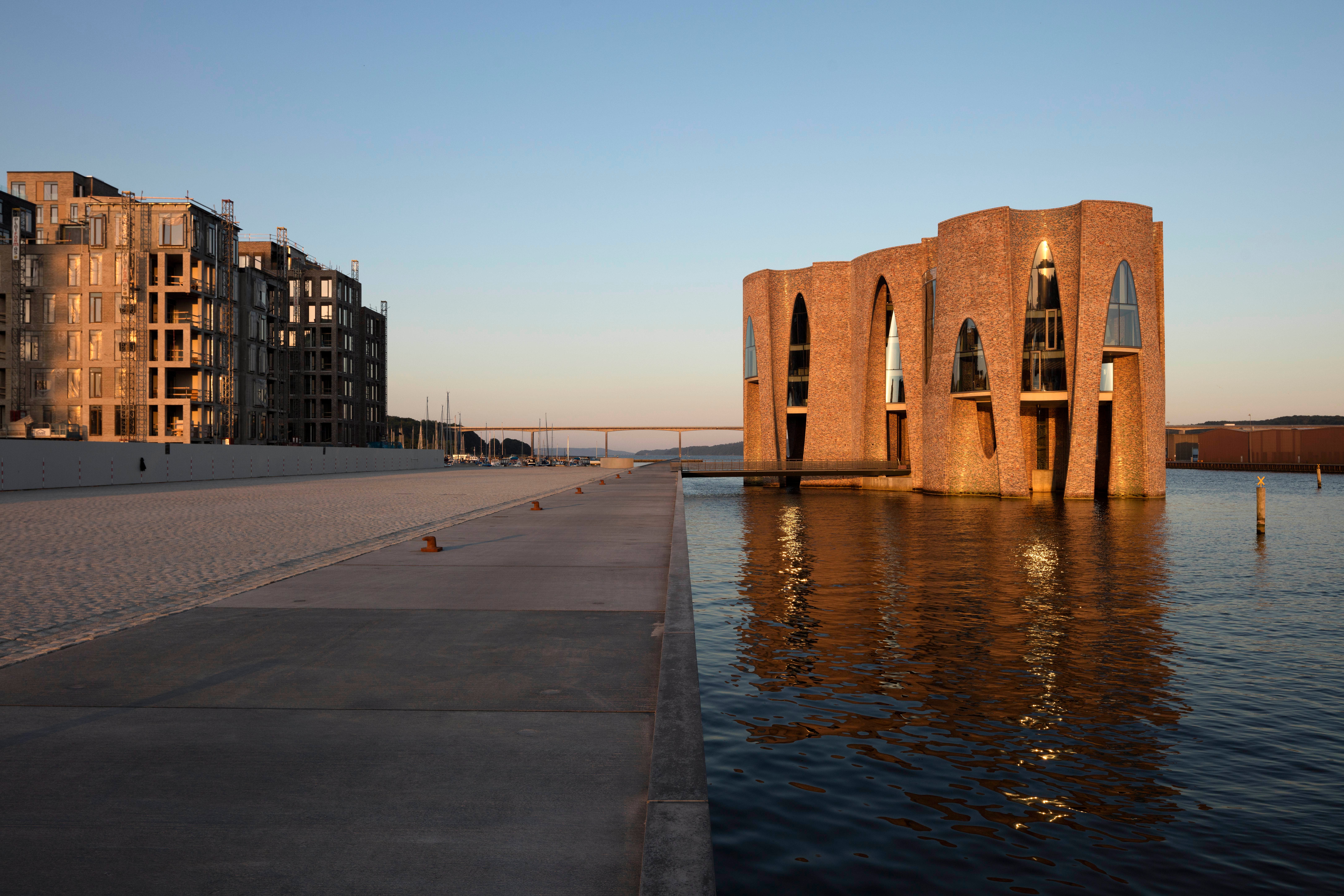 Tucked away in the harbor of Vejle in southern Denmark, past rows of industrial buildings, silos, and warehouses, a castle-like structure grows out of the water. From afar, the mass of curved brick and glass appears to be nothing more than a large sculpture, but upon closer inspection reveals itself to be occupiable, an intersection of abstract drums threaded with ribbons of glass that connects to the mainland by way of a footbridge. The double-height ground floor is open, allowing for light, sound, and wind to pass freely through its columns. Every step in a new direction and every turn of the head provides a new perspective; there is not just one ideal angle from which to take in the structure. Even the passage of mere minutes will change one's perception of the space, as the sun shifts to lengthen the shadows and light up the glistening water beneath as it laps gently against the building. There's a poetic tranquilness to the structure, and not one lazy detail. Even the multicolored bricks serve a function. One might easily mistake the structure for a museum, a lighthouse, or a public sculpture, but it is in fact, surprisingly enough, an office building.

Fjordenhus, as it is named, is the first complete structure designed by Danish and Icelandic artist Olafur Eliasson and his team, Studio Other Spaces. Commissioned as the new headquarters for Kirk Kapital, the structure allowed Eliasson and his creative partner, architect Sebastian Behmann, and their team to call upon years of research and experimentation on nature and environment to conceptualize Fjordenhus, marking the start of a new direction for the studio. Eliasson and Behmann have contributed ideas to other architectural projects, but Fjordenhus provided the opportunity to take full creative and conceptual control of a structure, from the architecture and interiors to the lighting, furniture, and site-specific artworks. "We wanted to design a furniture system that respects and supports the overall idea of the building, of being surrounded by this enormous environment," says Behmann in a video about the project. "It's about designing the experience, which guides you and gives you the narrative of the building," adds Eliasson.

To illustrate that effect, and to keep with the structure's embrace of curved surfaces and lines, the team made the conscious choice to craft round tables that invite collaboration and dialogue. The seating plan was designed so that colleagues face one another rather than work back-to-back, though there are certainly opportunities for solitary work. "The social life in an office, and how to maintain a healthy atmosphere in terms of sharing space was a part of the furniture design," explains Eliasson. "The round table around which people work does not introduce the same hierarchy as a rectangular table where someone is at the head. And in that sense, the design takes on a Scandinavian ambition of actually supporting the social component of a working environment."

In designing the structure, Eliasson, Behmann, and their team took the existing environment into careful consideration. "We experimented from early on with how to create an organic building that would respond to the ebb and flow of the tides, to the shimmering surface of the fjord, and to the ephemeral qualities of daylight, changing at different times of the day and of the year," explains Behmann. The aim was to create a space that incorporated nonquantifiable materials like sound, air, light, and other natural elements, rather than work around them. "The ground floor is publicly accessible, and it is really a space where you do nothing more than feel the wind blowing through, the temperature, the atmospheric conditions, and look at the surface of the water. It introduces the relationship between the structure and the city environment," says Eliasson.

One might be inclined to call Fjordenhus a pure work of architecture, though that was neither Eliasson's nor the client's intention. Rather, the artist approached creating the structure as a work of art. "Art and architecture are two fundamentally different languages," the artist tells AD. "You could say it's a bit like two countries that speak different languages, but they can still talk about the same thing in their own respective languages. And when that is successful, I think what they can amplify each other to achieve what neither of them can do alone." Behmann adds, "To us, Fjordenhus is a project where artistic thinking inspires architectural design."

For a project like this to come about, Eliasson and Studio Other Spaces were fortunate to have a creative partner who shared their vision and intentionally chose an artist to design the space. The artist notes that for a building like this to succeed, the commitment to artistry in the architecture has to come from both the design team and the client; there has to be an overlap between the wishes and the agenda on both sides. "They were very daring in asking an artist to build a building who has never done it before, but they were willing to do it," Eliasson says. "The element of risk is a significant part of this story."

Crain’s Chicago Business features Lisa Pickell as one of…