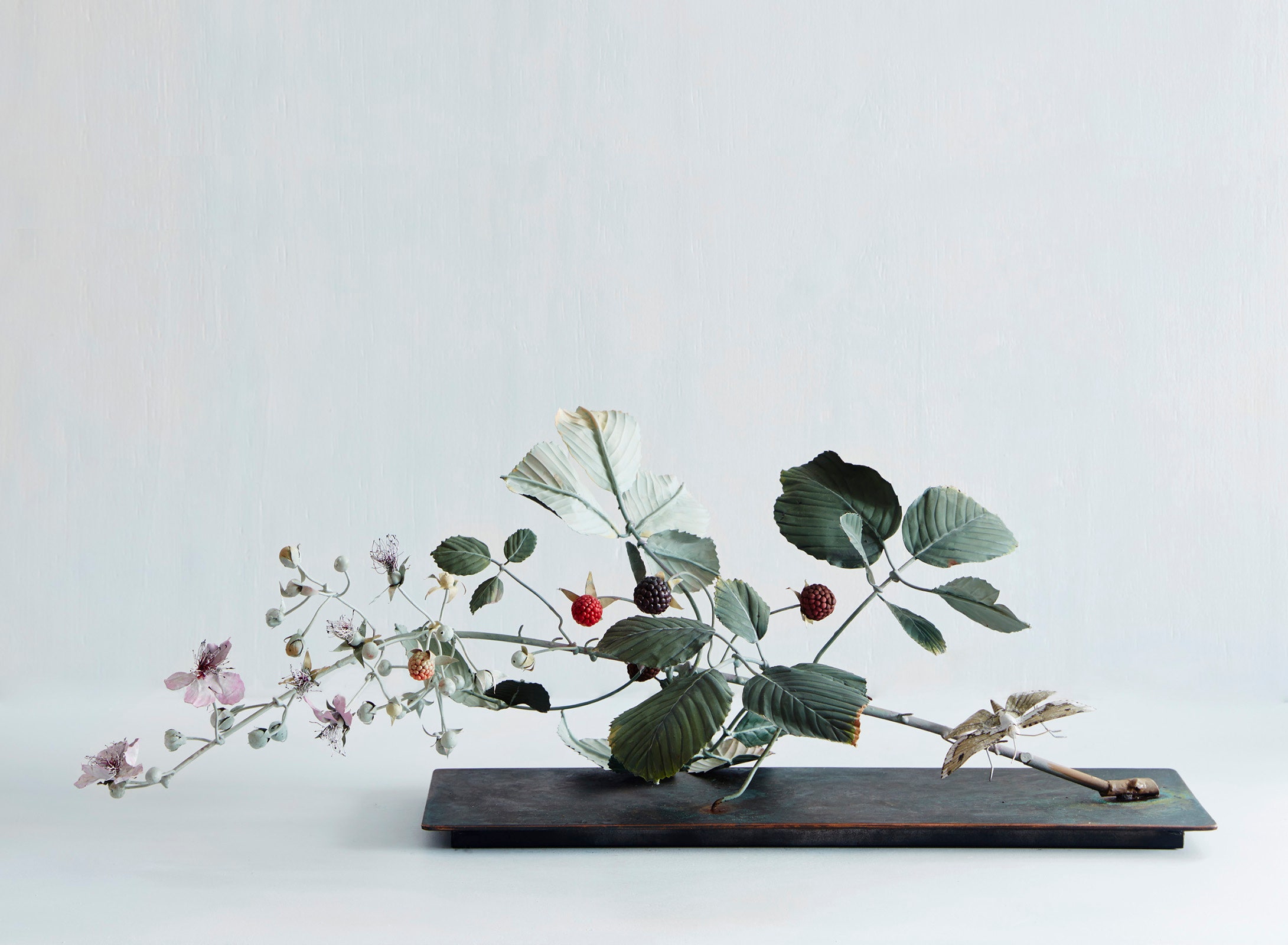 Carmen Almon has led a peripatetic life. She was born in Guatemala to an American diplomat father and Spanish mother and grew up traveling extensively. Throughout her travels, there has always been one constant: Her love for flowers. After studying at three art schools in Europe, she moved to Los Angels and painted urban landscapes. This work was exhibited, at the time, at the first gallery of a young dealer named Larry Gagosian. After relocating to New York, Carmen was the first employee hired by New York interior designer Howard Slatkin in the 1990s. Her title was art director, her job painting everything from silk fabrics to furniture. Slatkin often called her a “charming Bohemian.” It was there that she met socialite Deeda Blair, who asked Carmen to repair some metal flowers created by Mary Munnecke, a fifties artist who worked in the Chicago area. It was Carmen’s first exposure to tole. Captivated by their beauty, she decided to create her own floral sculptures.

Now a resident of New Orleans, Almon's tools include nail scissors, cutters, pliers, and her bare hands. She cuts copper sheets for leaves and petals, brass ad copper tubing for branches, and stems and wire for thinner stems and roots. She then paints them with a base coat if flat oil-based enamel, finishing with several coats of oil-paint washes. For a final touch, she adds butterfly, grasshopper or other insect alighting gently on the plant placing it at a particular moment. Slatkin compares her butterflies to the rare gems of Paris-based jewelry designer JAR.

“I have always traveled too much to have a garden," Almon muses. "I am not an experienced gardener but mire like a tourist in the fields of other people’s gardens. The plant’s strong will to live and grow fascinates me. The elaborate devices they invent in order to seduce both insects and us are ever interesting to me. In my work, I try to pay homage to the beauty and mystery of plans and their flowers. It is a big cliché, I know, but isn’t there truth to it?”

When asked if living in New Orleans has inspired her work, she offers a glimpse of an exhibition planned for Spring 2019. It will be based on vegetation found in the south, plumbago, jasmine, mountain laurel, honeysuckle, camellias and roses and is scheduled for the Octivia Art Gallery in New Orleans and then to travel to Houston. Carmen is not widely known to the public since most of her work comes from commissions. But she does have some high profile collectors in the fashion and design fields, Carolina Herrera, Carolyn Roehm (her Charleston home) and not surprisingly, Howard Slatkin, whose Fifth Avenue apartment is filled with dozens of her pieces.

Beginning last week, though, several of her works are on display in New York at the Chinese Porcelain Company in a show aptly titled "Wildflowers." The 23-piece collection includes works that range in price from $8,000-$20,000 and highlight Almon's thoughtful treatment of the flora she's seen around the world.

“Every year it is a surprise to see how Carmen’s work evolves, without changing the vision of depicting plant and flowers in their natural habitat," Pierre Durand, proprietor of the Chinese Porcelain Company, tells AD PRO. "For this exhibition, Carmen has chosen to interpret, in her own unique way, wild flowers and plants which grow near her farm in Bordeaux. Her work preserves for eternity a delicate moment in time in the brief life of these plants and flowers. Not unlike a successful portrait, she captures the soul of her subject.”

"Wildflowers" is on display at the Chinese Porcelain Company through May 17.

Home is Where the Hearth is for National Fireplace Month

Houseplant Care: Why Your Plant Is Dying (and How to Reverse It)