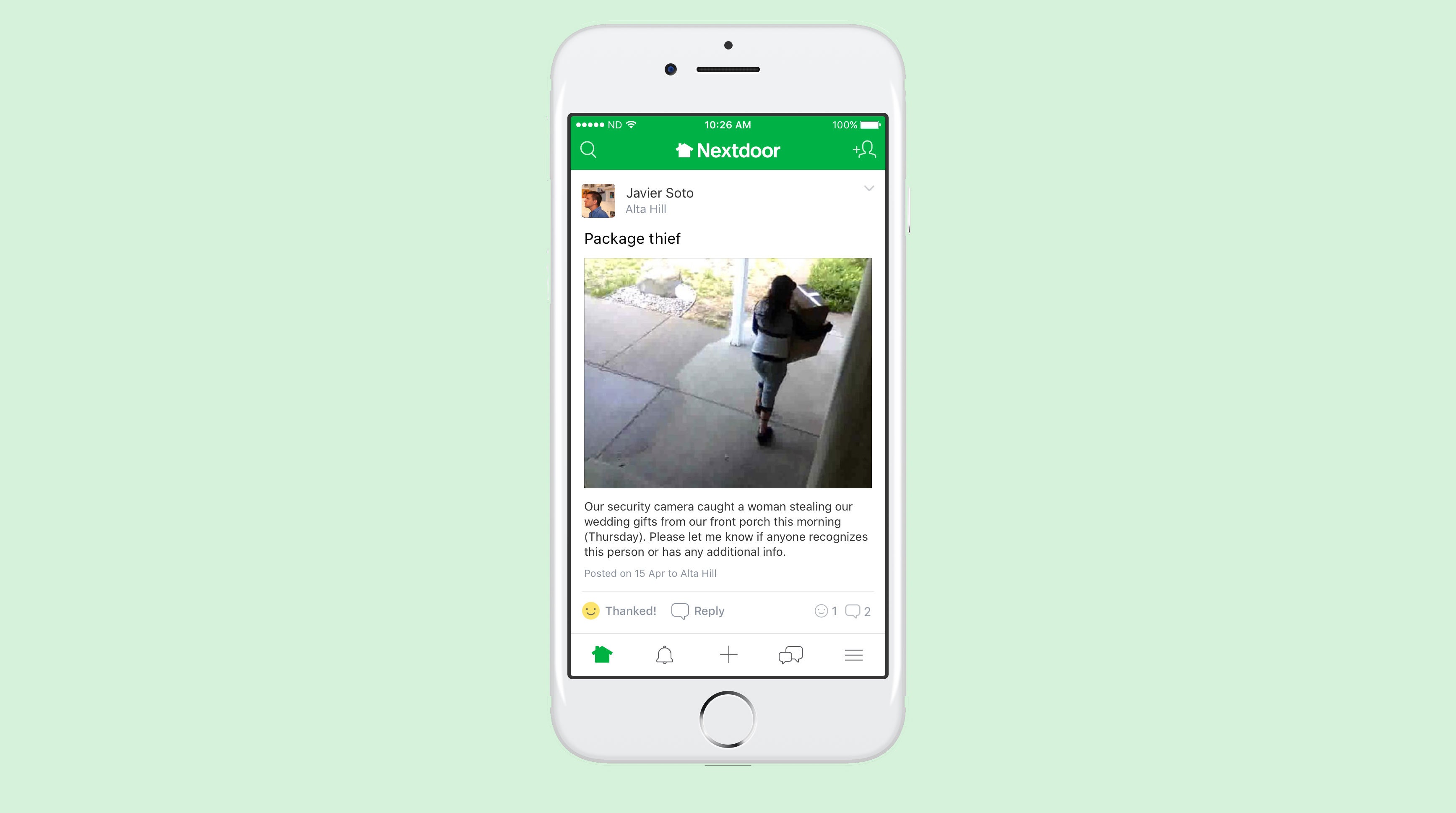 When Hurricane Harvey swept Houston last year, the Kingwood neighborhood, situated on the banks of the San Jacinto River, was one of the hardest hit. As the water rose, police officers were forced to leave their local station before it flooded, too. How would they stay in touch with each other as the crisis escalated? More importantly, how would they keep neighborhood residents up to date on developments?

On a hunch, officer Daniel von Quintus decided to give a few fellow officers access to the Kingwood Police Department's agency account on Nextdoor, a private social network used by over 170,000 American neighborhoods, before evacuating the station that day. From their phones, the officers began posting where trees were down, where flooding was worsening—any and every incident a resident might need to know while navigating the crisis. Jennifer Mayfield, Nextdoor's director of media relations and public affairs, says they also noted Houstonians communicating with one another through the app during Harvey: "We saw a neighbor posting to say, 'Hey, I’m on my roof and I can’t get through to 911, can you help?' And in a minute or two, a neighbor was responding to say, 'I’m getting my canoe and coming to get you.'"

Messages like these, broadcast directly to area residents from their local police and fire departments and mayor's offices, aren't just sent in times of crisis. Angela Douglas, a senior police officer and social media coordinator for the HPD, remembers one cop seeing a garage door open and two bikes inside while he was on patrol, so he posted a reminder for neighborhood residents to keep those doors closed when not in use. "Not only is it a tip for the citizen, it's preventative," she explains. Since Nextdoor launched in 2011, nearly 3,000 public agencies have created accounts (New Yorkers might have noticed that the FDNY just launched its page this week). Everyone who signs up for the network is verified using their address, so those municipalities know they're actually reaching area residents rather than a random group of people, as would be the case on, say, Twitter.

The agency can see how residents respond to its posts, but for privacy reasons its can't see what residents post to one another. (Jennifer and Angela are both quick to point out that Nextdoor is not a substitute for calling 911 in the event of an emergency, and upon sign-up you get the same disclaimer.) Most of what you see on your Nextdoor news feed is neighbor-to-neighbor chatter. Since I signed up last month, I've learned of a new coffee shop that just opened down the road, chatted with someone selling a bookshelf for $30, followed two cases of lost keys (neither resolved), and kept close tabs on a hit-and-run incident that was dutifully documented by an eyewitness who then found the car's owner and resolved the conflict by posting about it on Nextdoor. Kind of amazing, honestly.

Jennifer says crime and safety is the number one reason that people sign up for Nextdoor, and that 16 percent of all conversations on the app revolve around the topic: "Our goal when we set out was to build safer, stronger communities, and a big part of that is crime and safety." Still, sometimes things derail. The Twitter account Best of Nextdoor (not affiliated with the company) documents "quality neighborhood drama" as seen on the app, everything from hilarious push notifications ("Today's trending post: Dogs shitting") to incidents of vigilante activism gone awry (here's an alarming but funny one).

So, is the platform actually making neighborhoods safer? "The citizen who is engaged on Nextdoor is the same one who [already] comes to our city meetings," Angela points out, which is to say that it isn't exactly turning indifferent citizens into more civic-minded ones. It's also hard to attribute a drop or spike in crime rate to a single cause. But some people are persuaded. In 2016, the town of Lafayette, Indiana, saw a 20 percent drop in violent crime and a 9 percent drop in property crimes, which their police chief attributed to better connectivity between the department and the community through programs like Nextdoor. Houston has seen some similar instances, though Angela hesitates to make the leap: "Initially when we started using Nextdoor we noticed crime lowering in a specific area that happened to be an area that’s active on Nextdoor," she says, carefully. "It's just interesting.... There's not always going to be a correlation, but connected communities are just safer."