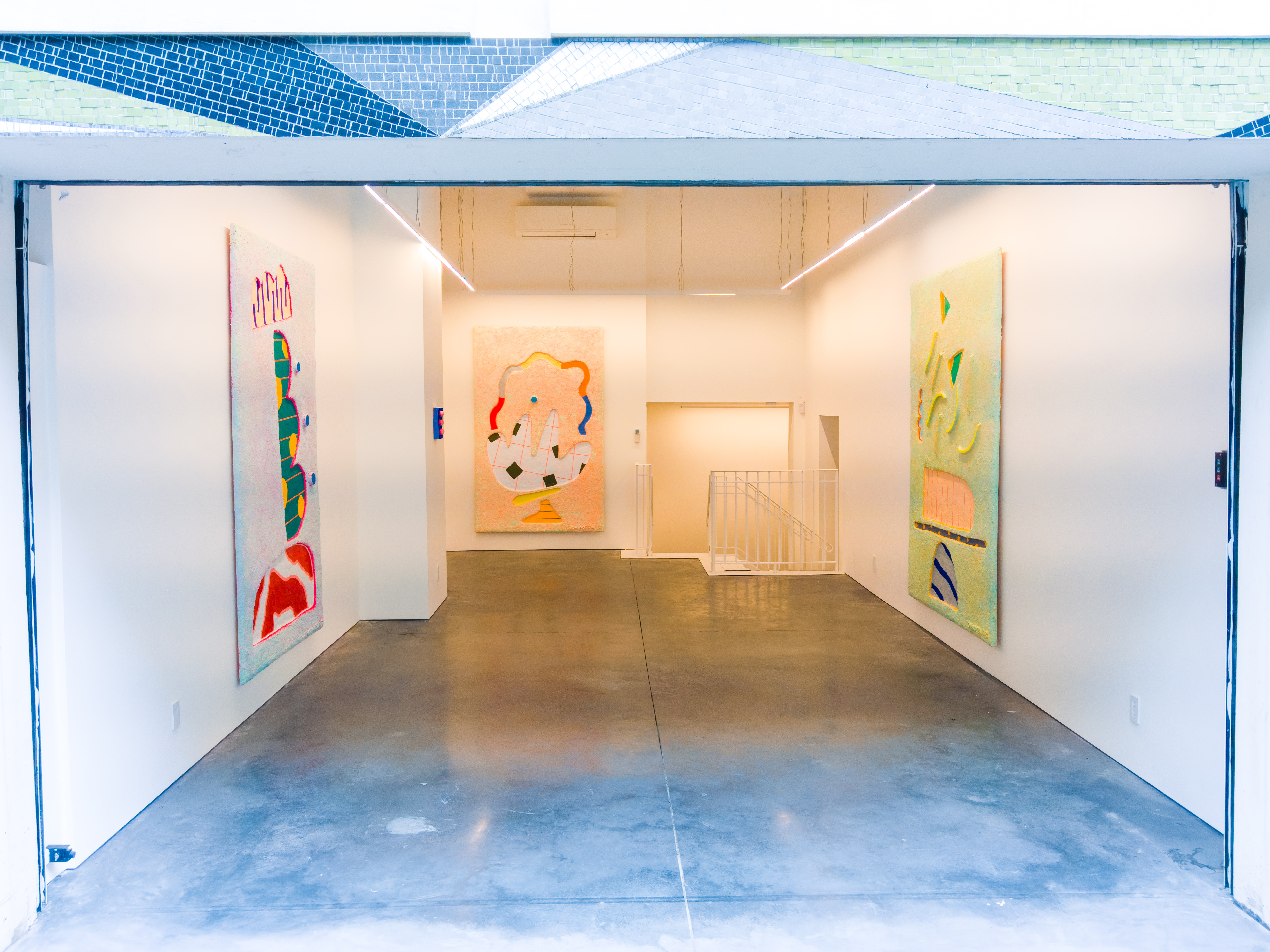 On a quiet block in the East Village, the sound of uplifting summertime music streams down the street, where mingling art patrons are gathered outside. Indoors, a DJ is posted up in the corner of a repurposed garage, surrounded by massive sculptural paintings crafted from paper pulp by the artistic duo Chiaozza, and, down a short flight of steps, baskets of canned beer and ice-cream bars are up for grabs. This is not your typical exhibition opening plagued with an overflow of champagne and small talk, because CY Fiore is not your traditional art gallery.

Eschewing the for-profit gallery model, Chloe Pollack-Robbins and Anna Cappelen of the interior design studio Curious Yellow and art advisor Beth Fiore are reinvesting the funds from art sales into programs that support at-risk youth in New York, such as Art Start and Unitas. “The kids that need help live right here in our community. You don’t need to go far to find them,” says Cappelen. “If you pay $100,000 for a painting, we want you to know that you’re saving a lot of homeless kids right here in the neighborhood.”

Since 2009, Cappelen and Pollack-Robbins have attempted to raise money for underprivileged children through several art pop-ups at Cappelen’s former loft in Soho, but were unsuccessful in their mission. Eight years later, they met Fiore while designing the chic Montauk hotel Hero Beach Club last summer, thus restoring their dream of giving back to kids through art.

In addition to exhibitions, CY Fiore will host various art workshops that engage the children with the artists, many of whom come from marginalized groups themselves. For example, a transgender artist will teach a DIY zine-making class, while Adam Frezza and Terri Chiao of Chiaozza are planning a paper collage session. “When people think of art nonprofits, they think it benefits artists, but we’re asking artists to work with us to benefit children, and, at the workshops, we are going to empower children to express themselves,” says Fiore. “Words can be scary, but with symbols and visual language it makes the process easier.”

Through biannual historical art shows that feature works by artists connected to the East Village, CY Fiore also presents a range of positive role models for the children. In September, the gallery intends to showcase art from the 1980s by Jean-Michel Basquiat and his cohorts, including Andy Warhol, Francesco Clemente, and Keith Haring. “We want to show that this community has a rich history of art, and teach children that they can be a part of that lineage,” explains Fiore.

To accompany the art on the walls, CY Fiore expects to draw from Cappelen and Pollack-Robbins’s design savvy with a rotation of furniture in the front room. “Art is that layer in a house that’s so important,” says Pollack-Robbins. “On the other hand, design is art, and, with that, the opportunities are endless.”

5 Things You Absolutely Must Do at Home When Mercury Is in Retrograde |...

Have You Heard of a Navajo Hogan?