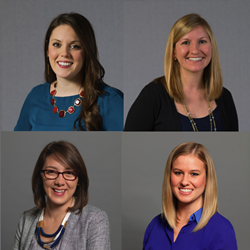 "These key promotions and Dyer Brown’s new title track represent our full commitment to the evolution of our team and the future of the firm as a whole." — Rachel Woodhouse, principal, director of operations

Approaching its 50th year in practice, the national architecture and interior design firm Dyer Brown has announced a major expansion of its leadership ranks and employee ownership in the firm. A new career track has debuted to include Associate and Principal levels, and the firm named its first four associates, a senior associate, two associate principals and new director of design as part of the announcement.

Reflecting a trend among industry-leading service companies around the world, Dyer Brown’s new title track and firm structure are formulated to recognize and foster professional qualities of leadership, including “commitment to the best interest of the firm as a whole; engagement of clients and teams with integrity; and maintaining transparent, respectful communication with a willingness to continually improve,” says the firm.

“As we further build and expand the future of Dyer Brown, we also actively seek to foster and encourage emerging leaders and owners who will take the firm forward to the next fifty years,” says Brent Zeigler, AIA, IIDA, president of Dyer Brown. “This new structure enhances our ability to reward and recognize our top designers and collaborators.”

In addition, the award-winning design firm has made a new Director-level appointment, elevating senior architect and designer Karen Bala, AIA to be Dyer Brown’s new Director of Design. Bala’s advancement to this position reflects her increasingly high profile in the design community and her leadership on award-winning buildings, spaces and products. Bala’s move into the role also frees the president Zeigler — formerly director of design — to devote more time to Dyer Brown’s strategic planning and business operations.

“These key promotions and Dyer Brown’s new title track represent our full commitment to the evolution of our team and the future of the firm as a whole,” says Rachel Woodhouse, NCIDQ, LEED AP, Dyer Brown’s principal and director of operations. “The leadership track now includes the levels of associate, senior associate, associate principal, and principal, with corresponding increases in responsibility and visibility.”

At the Associate level and above, according to Dyer Brown, their leadership ranks are characterized by collaborating in the best interest of the whole firm, staying actively engaged in studio leadership, and seeking to develop junior staff. The firm’s leaders also take on responsibilities related to financial management of their studios as they work closely with studio leaders, directors and principals to execute new strategy. Outside the firm, the associates and principals can be seen engaging widely with professional organizations and the real estate and client communities.

Dyer Brown’s latest announcement signals the firm’s continued robust growth and expansion in both project types and scales, as well as a clear intention to continue its tradition of growing and developing leaders from within its ranks. The move also speaks to Dyer Brown’s impressive staying power and growth in new national markets, including higher education and hospitality, which demand the vision and experience of individual market leaders. ###

Women in Design Get Their Due

COS and Phillip K. Smith III Devise an Instagram-Ready Installation in a Milanese Palazzo...