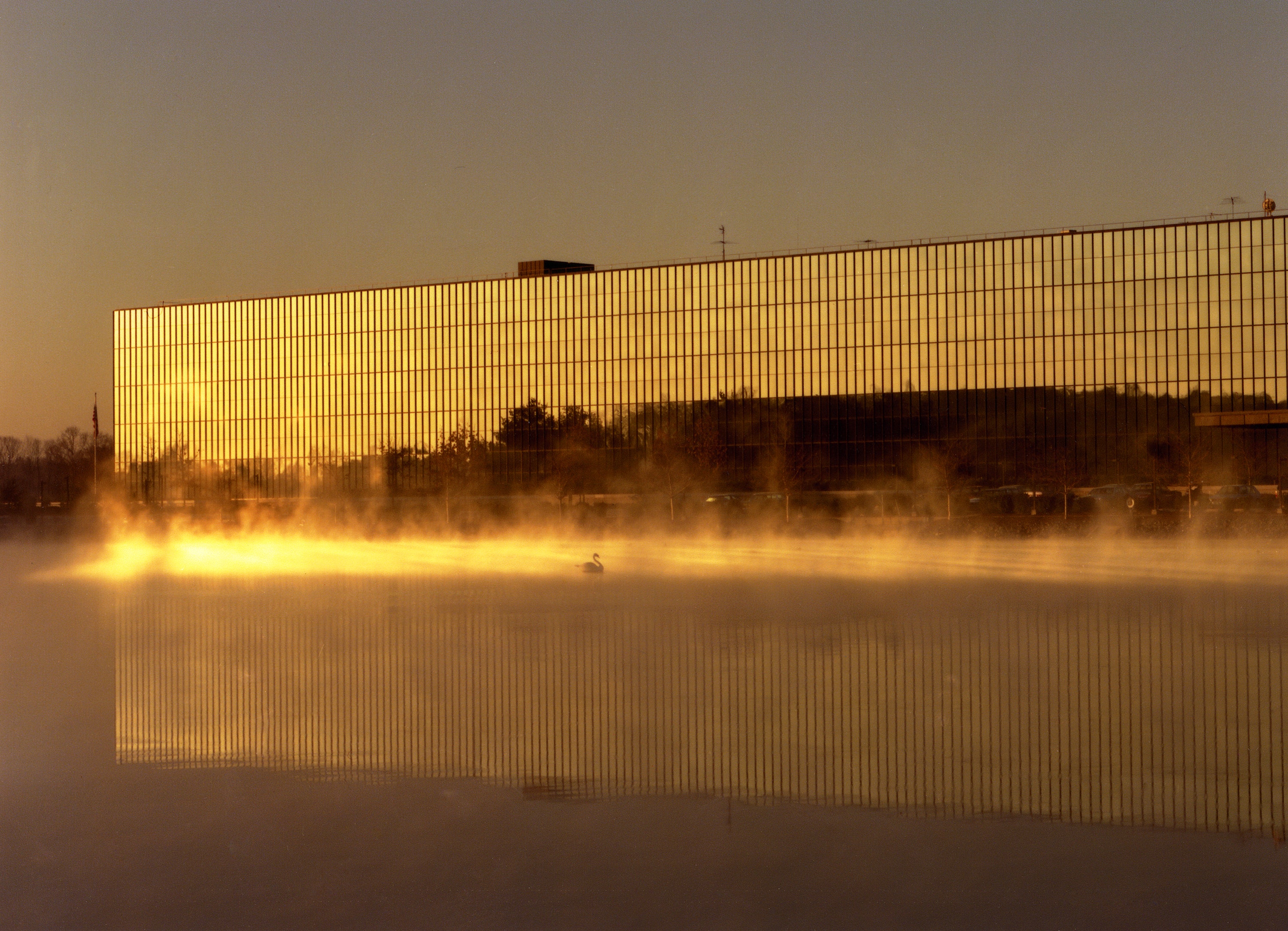 Often it’s the TWA Flight Center, the futuristic, wing-shaped terminal that opened at New York’s JFK Airport in 1962 (back when it was still called Idlewild and Jet Age–happy travelers boarded flights in their finest clothing), that first springs to mind at the mention of Finnish architect and industrial designer Eero Saarinen. As that landmark structure, awash in signature “Chili Pepper Red,” slowly transforms into the 512-room TWA Hotel slated for 2019, Bell Market, a new 6,000-square-foot food hall, is thrusting one of Saarinen’s lesser-known midcentury designs into the limelight.

Bell Labs, the Holmdel, New Jersey–based research and development facility for telecommunications giant AT&T, was another of Saarinen’s architectural triumphs. With its mirrored façade and expansive light-filled atrium, the modernist cube, constructed between 1959 and 1962—Saarinen passed away in 1961 and didn't see it's completion—was a sleek juxtaposition to the surrounding bucolic grounds. Inside the nearly two-million-square-foot building, industrious scientists toiled away on such innovations as the Big Bang Theory and cellular technology, even garnering several Nobel Peace Prizes. Long hours in the laboratory were punctuated by social cigarette breaks, made all the more alluring by ashtrays built into the balcony ledges in the cavernous hallways. By 2007, this inspiring era of discovery and camaraderie drew to a close when Bell Labs shuttered in the wake of new owner Alcatel-Lucent’s research consolidation scheme.

It was Ralph Zucker, president of Somerset Development, who saw the potential in revitalizing this abandoned, suburban office park. Last year, with a restoration led by New York architect Alexander Gorlin, Bell Labs slowly morphed into a growing, mixed-use “metroburb” that was rechristened as Bell Works. About a 10-minute drive from PNC Bank Arts Center, and an hour from New York City, here entrepreneurs hunker down in minimalist coworking spaces and refuel on pour-overs from the beloved Jersey café Booskerdoo Coffee & Baking Co. Locals visit for the Holmdel Library and Learning Center, formerly buried in the town hall basement, as well as the frequent art installations, yoga classes, and wine tastings.

Bell Market, dreamed up by husband and wife Richard and Chantelle Corbo, adds another layer of vibrancy and community to Bell Works. Richard, founder and CEO of RBC Hospitality Group (RBC stands for Run By Chefs), spent time at a number of San Francisco and New York restaurants like Standard Bar & Grill, Union Square Café, and Gary Danko, and most recently as the executive chef at Myriad Restaurant Group’s Tribeca Grill. Chantelle, beverage director and partner of RBC, is a longtime sommelier whose resume spans the Ritz-Carlton and Lettuce Entertain You Enterprises. Prior to Bell Market, she assembled the wine program for Upland and Stephen Starr Restaurant Group.

“We wanted to get out of New York and started looking at spaces for our own restaurant in places like Asbury Park,” says Richard. After a few enlightening conversations with restaurateur Drew Nieporent, Richard’s old boss, the Corbos were encouraged to pursue the fast-casual route. An ideal opportunity came in the form of Bell Works, which now flaunted a robust list of tenants, including Guardian Life Insurance, software company iCIMS, and Jersey Central Power & Light, all staffed with employees eager to eat quality meals without straying far from their offices. A dynamic food and drink operation was indeed now sustainable at Bell Works, and Richard started to “think about what this building needed and who could do it.”

To orchestrate this collaborative five-concept vision, RBC turned to New York design firm Nemaworkshop. Respecting Saarinen’s original plans was paramount to founder Anurag Nema. “We had studied photos of Bell Labs, but it’s only when you walk in that you are really wowed,” says Nema, “because you stand there and you see the scale of it and you understand the philosophy of Saarinen’s work. It’s an incredible building.”

Instead of competing with the storied space, Nemaworkshop sought out simple materials to accentuate it, like tiles from Spain, marble made at a family-owned quarry in Georgia, glass, and concrete, focusing on a neutral palette of gray, white, and creamy eggshell. “We wanted it to be clean and bright, a blank canvas so the food would pop out, like when holding a bowl of ramen against marble,” says Chantelle. Adds Nema: “We emphasized lighting, bringing the outside in and creating a little courtyard feel.”

Tulip-shaped pendants nod to Saarinen’s iconic furniture for Knoll, just as pieces from the Danish design brands Mater and &tradition bolster the restrained Scandinavian aesthetic. Guests might plop into a bright green banquette evocative of a tropical garden, or a stool at the 40-foot communal soaped-oak table with live plants running across the center.

“There’s a social, convivial vibe. People that don’t even have offices come here and hang out,” points out Chantelle, noting that plentiful outlets easily allow the space to double as a work zone. “It’s almost like you’re in natural light, enclosed in greenery, which creates a sense of privacy,” she adds.

Straight lines complement the building’s grid-like design, but Bell Market is also enlivened by textural details. Voluptuous made-in-Italy Acunto Napoli pizza ovens at Corbo & Sons, the Japanese pottery that adorns Jozu, and the bagel dowels on display at Bubz, for example, all inject the sinuous space with distinctive bursts of personality.

Among the numerous plans for Bell Works down the pipeline are a hotel, a Waldorf school, and a slew of retail outlets, and as it continues to evolve into a cultural and civic hub, the RBC team is also eager to make Bell Market a showcase for Garden State purveyors—especially, says Chantelle, as more people “are realizing how awesome Jersey agriculture is.”

One person who is particularly thrilled about Bell Market’s arrival is Rich’s father. In a fortuitous twist, during the 1980s the now-retired signmaker and engraver worked at Bell Labs.