Home Modern Architecture From Tragedy to Triumph, How One Entrepreneur Hooked Major Retailers 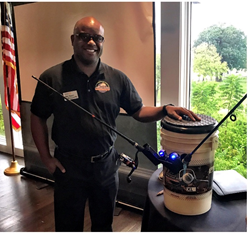 Joe Pippins, creator and founder of The Fishing Caddy

I grew up in the inner city and had to learn how to make my way, taking scraps, being the butt of jokes, and learning to earn money on my own, explains Joe Pippins, creator and founder of The Fishing Caddy. It’s my childhood and ingenuity that has helped me overcome and go on to succeed.

Millions of people throw their hat into the ring to become entrepreneurs. Most of them, however, don’t make it far before they walk away, giving up on their business-owning dreams. One entrepreneur, Joe Pippins, has defied the odds and tragic situations that could have held him back, and now his business is being taken to a whole new level. Within the last few months, he entered into partnerships with four major retailers to have his line of products, The Fishing Caddy, in their stores around the country.

“I grew up in the inner city and had to learn how to make my way, taking scraps, being the butt of jokes, and learning to earn money on my own,” explains Joe Pippins, creator and founder of The Fishing Caddy. “It’s my childhood and ingenuity that has helped me overcome and go on to succeed. It’s all been a journey and learning experience.”

Pippins started selling toys out of his bedroom window when he was in the third grade. When he was in middle school he learned that he could make money selling candy. Not only did he sell it, but he had a crew of friends selling it, too. Growing up poor, and at one time being homeless, he used those lessons to fuel his motivations to succeed. He learned how to make money, as well as manage it. He also learned some lessons along the way, such as never leaving anyone else in charge of your profits.

As an adult, he had an entrepreneurial dream and invented The Fishing Caddy, which is an all-in-one fishing system. But the road to success was bumpy and he had a lot of things that could have held him back.

In the last two years, while trying to launch his business idea, his younger brother was a victim of gun violence, and his mother passed away. Then he experienced another major loss when the man, Curt Robertson, who taught him how to fish and was also his youth soccer coach died. These tragedies made him question his goals and consider giving up.

“I’ve learned so much about giving it everything you can and working toward the things you want,” added Pippins. “It’s important to know that you can’t control where you were born or the environment you were raised in, but through hard work and a take no prisoners mentality you can achieve the things you desire.”

Pippins dream came when he entered into the partnerships with major retailers, each of which will be carrying five of his fishing products. The Fishing Caddy system, as well as his single rod mounts, anywhere rod holder mounts, and anywhere cup holders, will all be sold in Ace Hardware, Bass Pro Shops, Cabela’s, and Scheels All Sports at locations around the country.

The products will be in stores in time for consumers to do their holiday shopping, giving them great present options for the estimated 46 million Americans who participate in fishing. The Fishing Caddy makes a great gift, because it will help ensure fishing trips are less stressful and will be enjoyed more, because it’s been designed for organization and to improve the anglers’ experience. The caddy is the world’ first all-in-one fishing system, offering a padded seat top or tackle box lid, a built-in cup holder, a life well for the fish caught, two rod holders, LED lights, and more. The water weight prevents it from tipping over, making a great piece of gear for sharing with a family that loves the outdoors.

The Fishing Caddy, which ranges in price from $69.95 to $129, was expertly designed for all types of fishing, and can be used by anglers of all ages. The organization system gives people everything they need for a great fishing experience. The fishing system has been designed to help make fishing more enjoyable, and give people more time to fish, rather than track down and organize their tackle and supplies. The Fishing Caddy is available online at Amazon, Etsy, Ace Hardware, Bass Pro Shops, Cabela’s, and Scheels locations, and at the company website: https://thefishingcaddy.com.

About The Fishing Caddy
The Fishing Caddy is the world’s first all-in-one fishing system. Created by Joe Pippins, the caddy offers anglers an easy and simplified way to head out fishing. Features on the caddy include two rod holders, a cup holder, live well for storing fish, tackle box, and a padded seat option. The Fishing Caddy is made in the USA and comes with a two-year warranty. For more information, visit the site at: https://thefishingcaddy.com.