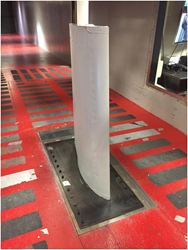 The testing conducted at NASA’s Icing Research Tunnel has moved the hybrid technology to a readiness level of 6 (TRL6).

Invercon Inc. and NEI Corporation have recently announced that their newly developed de-icing system was tested successfully at the NASA Glenn Research Center’s Icing Research Tunnel. The test was witnessed by engineers and scientists at the Research Center, as well as from the industry. The Invercon-NEI team met the objective of demonstrating a low power anti-ice system in conjunction with NEI’s NANOMYTE® SuperAi anti-ice coating that prevents ice accretion on the leading edge of an airfoil. The test was performed on a full-size airfoil under simulated in-flight conditions, following nearly two years of development and laboratory testing.

All commercial aircraft have a built-in ice protection system, which could be either a thermal, thermo-mechanical, electro-mechanical, or pneumatic system. A common issue with de-icing devices is that they consume substantial power. Aircraft generally look to reduce power consumption, and with the advent of battery-powered aircraft, mechanisms or features that reduce power consumption are critically important. Icing presents a particular challenge for commercial and military drones, where ice can build up on the wings and propellers and result in crashes. In fact, the current practice is not to fly drones when icing conditions are predicted. Applying a passive anti-ice coating that functions synergistically with an active de-icing device is an attractive hybrid approach, which the team of NEI and Invercon has now demonstrated on full-scale prototypes.

Invercon has developed a new, retrofittable, electro-pneumatic deicing system that combines the most attractive aspects of several existing systems without their associated drawbacks. The Invercon system requires remarkably low power (≤ 2.5 kW), is retrofittable on any airfoil, adds very little weight (~50 lbs), and is durable enough to last the life of the aircraft once retrofitted. Importantly, the system looks, feels, and acts like the original leading edge and can provide millions of maintenance-free deicing cycles. The entire wing test section (Figure 1) was coated with NANOMYTE® SuperAi.

Invercon successfully completed icing tests of the electro-pneumatic deicing system at NASA Glenn’s Icing Research Tunnel (IRT) under a full range of representative icing conditions. The Invercon system was able to provide continuous deicing of the wing section leading edge over all of the test conditions ranging from temperatures of -3°C to -20°C with various liquid water content. Typically, the system allows ice to accrete for about 2 minutes and then completely sheds upper and lower surface ice upon system activation.

The testing at NASA’s IRT, which is the longest running icing facility in the world, has moved the hybrid technology to a readiness level of 6 (i.e., TRL6), which is a scale used by NASA and Department of Defense to gauge the maturity level of a technology.

Both NEI Corporation and INVERCON LLC are grateful for the financial support extended by the Small Business Innovation Research Program from the Air Force and NASA. The SBIR program funds product development efforts that reduce concepts to practice and then to prototypes, thereby reducing technology risk. The successful full-scale demonstration by the team has advanced a new technology to a state of commercial readiness.

About NEI Corporation:
NEI Corporation is an application-driven company that utilizes nanotechnology to develop and produce advanced materials. The company’s core competencies are in synthesizing nanoscale materials and prototyping products that incorporate the advanced materials. NEI offers an array of Advanced Protective Coatings for metal and polymer surfaces. The coatings have tailored functionalities, such as anti-corrosion, self-healing, scratch resistance, ice-phobic, and self-cleaning.