Home News How ASH NYC Is Changing the Hotel Industry 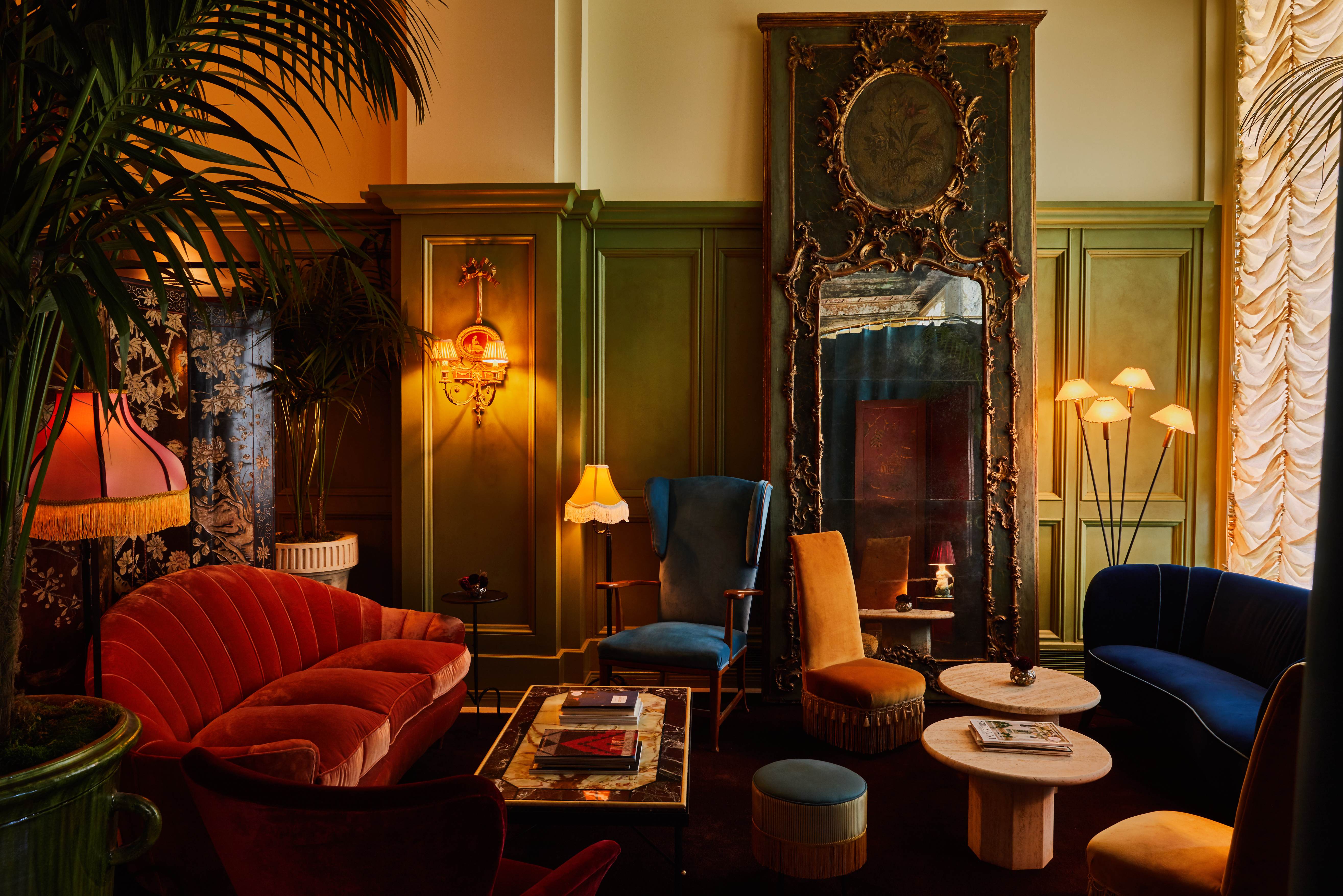 It's a Saturday evening in early spring and the lobby of downtown Detroit's newest hotel, the Siren is packed. Out-of-towners and locals alike lounge on fringed, velvet-clad furniture, friends gather on a petite, canopied daybed for an intimate chat, selfies are snapped in an ornate 19th-century Italian giltwood mirror.

"It's been like this since we opened," says the maitre'd, dressed in a pale pink suit an almost exact match to the rosy glow that pours out of the hotel's Candy Bar, its walls flecked with the glittery shimmer of a disco ball and a 1970s Murano glass chandelier. Notably, the hotel wasn't even fully opened—its second-floor restaurant, Karl's, run by chef Kate Williams, and eight-seat tasting counter helmed by Garrett Lipar were still under construction, as were several other floors and the roof top bar. But at long last, it seemed, the crop of cool hunters flocking to Detroit for its post-industrial cultural renaissance had a place to post up.

This is the genius of Ari Heckman, Jonathan Minkoff, Will Cooper, and Jenna Goldman of Brooklyn-based firm ASH NYC: They know how to spot the up-and-comers. Cities, that is.

When Heckman and Minkoff left their jobs at a Brooklyn-based real estate firm to start one of their own in 2008, hotels weren't really part of the plan.

"There was never a real business plan," Heckman admits. "It was always very organic."

At that point, they were essentially running two businesses side-by-side: one that invested in real estate and another that specialized in staging, something they started doing for their own projects that soon gained traction among the industry at large. With the one-year non-compete from their old employer mandating that they invest outside of New York, the duo looked to Heckman's hometown: Providence, Rhode Island.

"We started buying college housing near Brown and RISD," he explains. "Multi-family buildings that we could make a little bit better than the competition. It was like putting lipstick on a pig."

Not long after, they brought in Will Cooper who had cut his teeth at Ralph Lauren, as chief creative officer to tackle merging the two businesses into one. Soon, they were buying run-down residential properties in Brooklyn, spiffing them up, and re-selling them at serious gains. Then, in 2012, a broker brought them an interesting building: a landmarked strip club and brothel in downtown Providence.

"It had been for most of its history a boarding house. It had 60 rooms and 60 en suite bathrooms," says Heckman (they ended up merging a few, bringing the new total down to 53). "It was just staring you in the face that you should preserve that footprint and make it a hotel."

"There are triggers," says Cooper. "Art, food, Brown, RISD all those things that show something happening."

Despite what his real estate world mentors told him (mostly, "stay away from hotels"), Heckman zeroed in on what he saw as an obvious need: "All or most of the hotels there are very corporate, standard hotels but it’s this funky creative city. I just had a feeling that this product would be really well received and appreciated." They went for it.

Soon, fresh off a trip to Europe, Cooper and Heckman outfitted their new building—the Dean—with a pared-down sensibility that called to mind Axel Vervoordt's minimalist dreamland in Belgium and the intimate charm of a Parisian hôtel particulier by mixing in antiques, playing with scale, and always adding a dash of the unexpected.

"We came back with this European idea of what we thought was interesting," says Cooper. "With hotels, you’re creating a fantasy for a transient public that needs something to grab a hold of. We try to extract that at the beginning and design on top of that."

"We really wanted to divorce ourselves from the American point of view, particularly when it came to hotels," Heckman adds. "I’d say that was one of the epiphanies of the design process of the Dean."

The Dean itself was the real epiphany. In it, Ash had landed on a formula that could be replicated with nuance across the U.S. Historic buildings in tertiary cities with a steady flow of business travelers and a developing cultural scene, it turned out, were perfect vessels for a new sort of boutique hotel, where prices per night were still affordable (rooms at the Dean start around $100/night). In return, the hotel itself brings people into these on-the-rise cities.

"There's a term called induced demand," Heckman explains. "Where people will travel–and I’m probably that type of traveler—because there’s a cool hotel. I’ll know nothing about the city but say 'Oh this hotel looks cool. It’s an amazing jumping off point for exploring the city.'"

The Dean delivered, and soon Ash was scouring the States for other burgeoning metropolises that fit the bill. Two worthy buildings soon presented themselves: a 19th-century church, rectory, convent, and school in New Orleans' Marigny neighborhood (stuck in the throes of a zoning change, it won't open until this fall) and the 20th century Renaissance Revival Wurlitzer building in downtown Detroit.

The process in Detroit unfolded in a similar manner: the old Wurlitzer organ headquarters in downtown Detroit kept being passed over by developers who found its, 30-foot-wide footprint too narrow to convert into residential. But with a steady flow of business travelers, an artsy uptick, and the still-quite-low cost of real estate, Ash pounced, turning the intimate corridors and module-like rooms into a space that recalls 1920s Detroit glamour through a lens of storied decorators like Madeleine Castaing, Syrie Maugham or Renzo Mongiardino (his beloved Giacomo restaurant in Milan inspired the lobby's pistachio-green palette).

Ash went even deeper into decorative history past for Peter & Paul, the parish-turned-hotel opening later this year in New Orleans. Here, credenzas by a local woodworker are being painted by a local woman inspired by Jean Michel Frank and Christian Bérard's famous trompe l'oeil room, and the muted primaries of religious icon paintings were extracted and applied in monochromatic strokes to just over 71 rooms.

"We developed all these custom fabrics in Switzerland and every room gets one color," says Cooper, sorting through swatches of ginghams and checks. "On the fourth floor, for instance, your draperies are red, your bedding is red, all of your upholstery is red.

And just when you can't imagine that they could do anything else, they reveal a series of menswear-covered inspirations for their next location: Baltimore, MD, where they've locked down a 1912 building that once housed bachelor apartments.

"We're going to do wall-to-wall tortoiseshell carpet," Cooper gushes, holding out a swatch.

Ten years after its founding, Ash—which will soon move to a new office on the border of Williamsburg and Greenpoint—claims 37 employees (15 dedicated to the hotel biz). While their business spans from residential interior design to staging to real estate development, even to—after many requests—a small collection of furniture, it's in the hotel projects that every aspect of their varied practice can shine.

"We’re working with a model that can now be kind of cleaned up and repeated," explains Cooper, who is quick to assert "Not replicated—we’re not copy-pasting."

But Heckman jumps in, admitting: "Eventually we’ll run out of cities where it makes sense."

They think a lot about the next frontier. They're often asked, predictably, if they'll ever do a hotel in a major city like New York or L.A.

Their latest preoccupation, at least for now, is an idea of truly over-the-top luxury—maybe it's a double-wide townhouse on the Upper East Side, or an American riff on Paris' hôtel particulier. Says Cooper: "I think it's figuring out how to merge luxury real estate into a hotel that’s just . . . beyond."

Dissecting My Love-Hate Relationship with My Laundromat