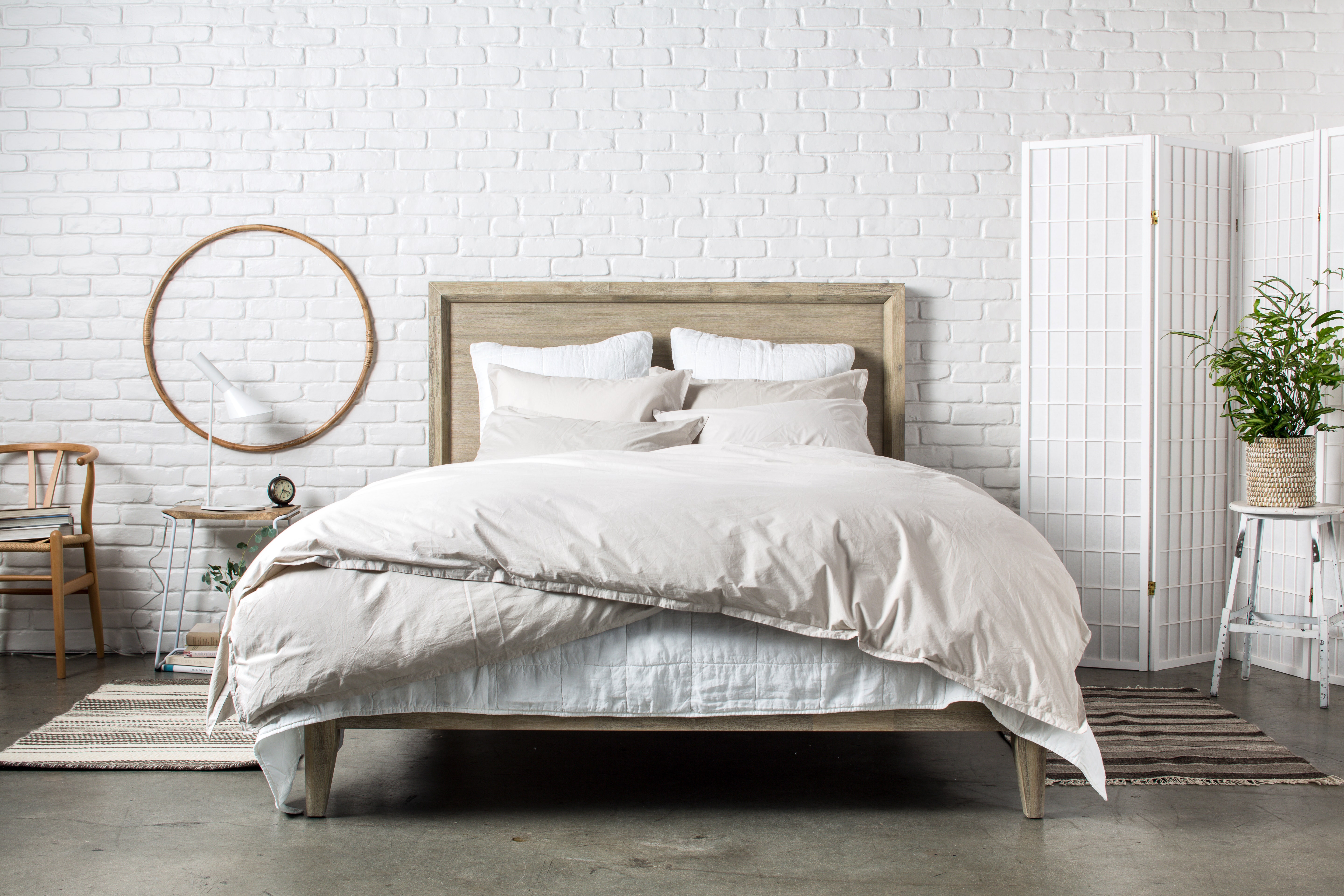 Just as the well-engineered foam mattresses conveniently ordered online at Casper, Leesa, and Tuft & Needle have upstaged those on offer at bland Mattress Firm showrooms, the era of lusting for “white sales” is fading fast. Who wants to trek to the nth floor of a department store for pillow shams and washcloths and fluffy comforters when brands like Boll & Branch, Brooklinen, and Buffy will ship them straight to your door?

New York–based Riley is the latest to join a rapidly growing list of companies redefining the bedding category by cutting out the middleman and replacing markups with ease and affordability. A former VP of marketing for Net-a-Porter and Barneys New York, Riley founder and president Heather Kaminetsky has a track record of building successful e-commerce strategies. Believing there is a sought-after middle ground for sheets­—an antidote to both swanky, overpriced versions and those boxes of low-priced, scratchy ones randomly plucked from the aisle of a chaotic Bed Bath & Beyond—Kaminetsky wants Riley to symbolize a lifestyle, what she calls “a luxurious and carefree existence, how everyone wants to feel when they get out of bed.”

In addition to a collection of sheets, pillows, comforters, duvets, and shams made at a fourth-generation mill in Portugal “where the people who work there love what they do,” Kaminetsky points out, Riley also puts bath products in the spotlight. What her towel sets, resort-like waffle robes, and combed-cotton tub mats all underscore is a plan to eventually delve deeper into the world of home and design. Beginning with bed and bath as opposed to, say, tabletop accessories and living room area rugs was a logical decision. After all, she says, “Everyone uses sheets and towels every day. People can relate to them. They are part of life.” The bottom line is better, too: These soft goods are relatively uncomplicated to produce and typically far more efficient from an operational perspective.

Tianjiao Yu echoes that outlook, agreeing that bedding was a sensible gateway product for Flaneur, the New York City–based company she founded in 2015 with partner Lu Xiong. Fresh out of Columbia University, Yu and Xiong embarked on a train trip through Europe. In various small towns, they grew smitten with textile and glass artisans and their devotion to craftsmanship. That initial interest inspired the creation of Flaneur. Color is the brand’s specialty; Flaneur offers sheets and duvets spun from 100 percent Supima cotton and biodegradable Lyocell thread custom dyed to any hue on the Pantone wheel. Yu and Xiong also replicate paint chip samples and upholstery swatches and invite consumers to order from Flaneur’s Color House, a library that runs the gamut from earthy tones conjuring Marrakech to Rococo-inspired shades of pastel.

Until recently, says Yu, fancy sheets “were always beige or white. If you wanted beautiful or saturated colors you probably had to compromise and go to mass-market places like Target.” Yu describes her clients as “comfortably optimistic,” interested in a bolder palette of colors that hold meaning for them, like a Turkish blue that nods to their heritage or the green of a European garden they just can’t forget. Such bespoke offerings, coupled with a fast turnaround time, provide distinct alternatives to traditional bedding that customers have found appealing; though the company won’t release figures, business has grown year over year. Yu adds that the rising interest in these introductory items has paved the way for the brand to consider baby bedding, too.

Such a flexibility of offerings—presented in an easily navigable fashion—is especially attractive to today’s customers, who increasingly place a premium on service and customization of whatever it is they purchase. Between monogramming capabilities and the personal-shopper service currently percolating in her mind, Riley’s Kaminetsky has also made individualized attention a company cornerstone.

Kaminetsky's and Yu’s ambitious, experiential plans bode well when considering the success of Ariel Kaye, who gave up an advertising career to launch Los Angeles–based Parachute Home in 2014. Although she knew she wanted Parachute Home to encompass more than bedding from the get-go, Kaye realized it was a good entry point to establish a level of trust. “The bedroom is an intimate part of the home to begin with," she says. “There’s a larger trend of people taking care of themselves and incorporating more conscious wellness, and I felt there was this opportunity to help people get a better night’s sleep.” Instead of dwelling on the thread counts big-box retailers are keen to illuminate (and which, often, are virtually meaningless in terms of translating to comfort), Kaye focused on the needs of shoppers who “don’t want to go up 12 escalators” to find what they are looking for, highlighting the inherent luxury of bedding in the process.

Adding this emotional layer to the sheet-buying equation quickly resonated with online shoppers: 45 percent of Parachute Home’s customers are repeat. Though she won’t reveal figures, Kaye says that the brand’s financial “comfort”—along with the success of direct-to-consumer startup hits like Warby Parker eyewear, Dollar Shave Club grooming kits, and Glossier skincare and beauty products—has made it attractive to venture capitalists. “Once I gained momentum, I started to have those meetings,” says Kaye, and to date, the brand has received $15 million from investors that include Flybridge Capital Partners and Upfront Ventures.

Proving that bedding lays a solid foundation, Kaye’s empire now spans shower curtains, tablecloths, and napkins as well, all produced by craftsmen at factories in Portugal, Turkey, Italy, and the U.S. She has also moved Parachute Home into the brick-and-mortar realm with store locations in L.A.'s Venice Beach; Portland, Oregon; and, later this month, New York’s SoHo neighborhood. She's even made a foray into furniture via a bed collaboration with furnituremaker Chris Earl.

Kaminetsky’s passion for growing Riley is just as robust, though she isn’t keen to take the brand on the investor route just yet. She might not need to. “Over time, if we need a cash infusion, it would be entertained,” she says. “But I am trying to run it in as grassroots a style as possible.” Bedding, after all, is just the beginning.

Buying Custom Furniture Can Be Easier (and Cheaper!) Than You Think