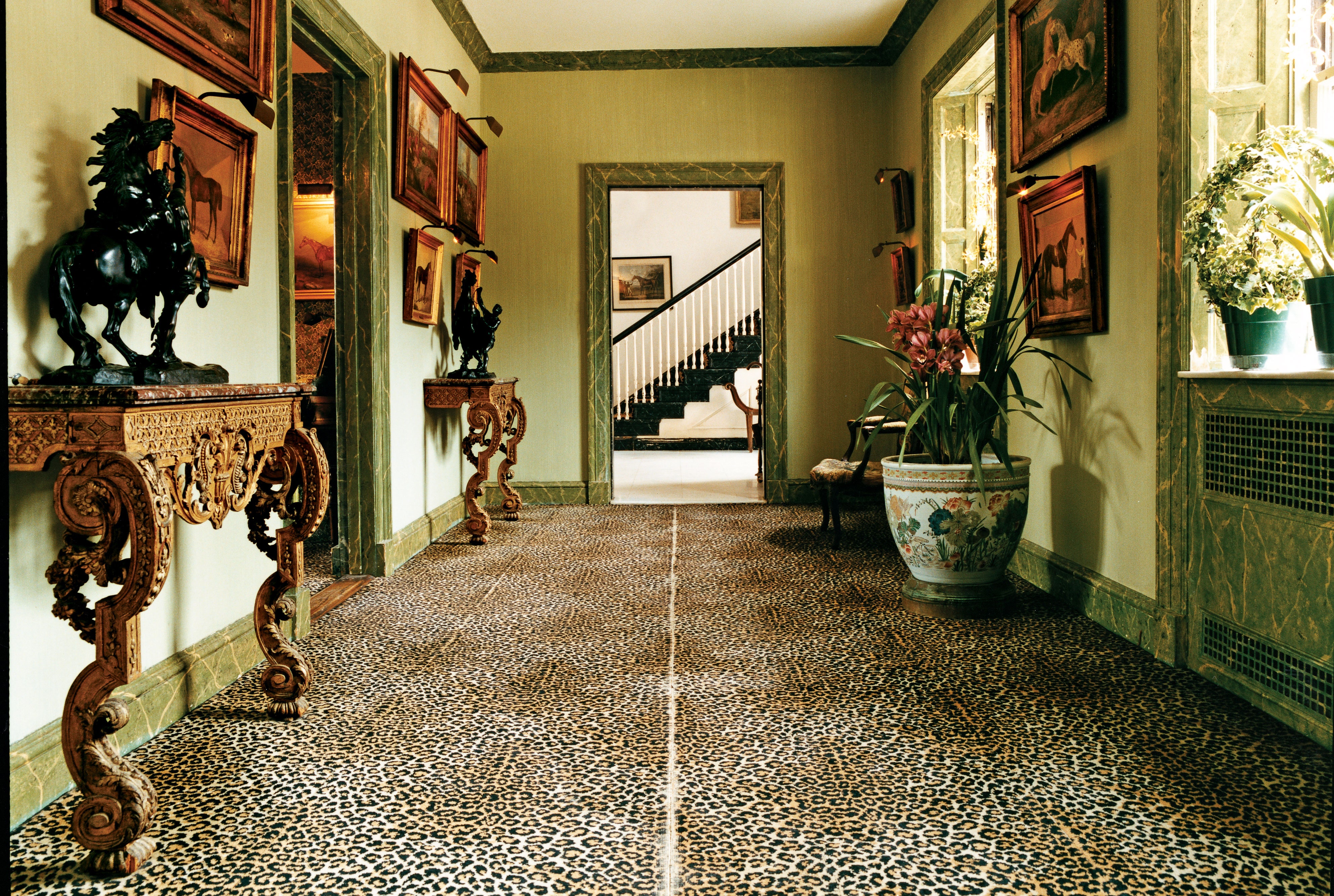 Technically, a corridor is merely a passage that leads from one room to another. But domestic thoroughfares, so often overlooked when it comes to decoration, can be so much more. Case in point? The swank cross hall at Templeton, a now-demolished Long Island house that belonged to Lucy “C. Z.” Guest—fashion plate, garden writer, equestrian, and, surprisingly enough, a showgirl who had been painted starkers by Diego Rivera—and her polo-playing, big-game-hunting, airline-investing husband, Winston, from the late 1960s until it was sold in 2014 by their daughter, Cornelia, an animal-welfare activist and entrepreneur.

“I love beauty and style. My goodness. I wanted my houses to be always beautifully turned out and in style. It catches the eye,” C. Z. (1920-2003) said in a 1977 interview. “I’m very meticulous about my houses. I want to have the best wine, the best food, [and] beautiful thoroughbred horses.” Gossip columnist Cholly Knickerbocker (the nom-de-plume of socialite Igor Cassini) took notice, and in a 1958 profile proclaimed her “one of a too small number of young matrons who actually give thought to the details of correct entertaining.”

When it came to decoration, C. Z. (a lisping childhood pronunciation of “sister” that seems to have been rendered Ceezee or Cee-Zee until being reduced to snappy initials) followed in the footsteps of many in her social set by patronizing the ultra-fashionable Stéphane Boudin (1888-1967). The dapper, mustachioed Frenchman, who had retired as president of Jansen, was arguably the greatest decorator of the 20th century, putting his stamp on the Kennedy White House, the Palm Beach residence and Manhattan apartment of collectors Jayne and Charles Wrightsman, and multiple houses for Duke and Duchess of Windsor. (They would become Cornelia Guest’s godparents, along with Alexis, Baron de Redé.) For the Guests, who wed in 1947 at best man Ernest Hemingway’s Havana farm, Boudin primarily reworked—salmon dining room, yellow-and-green library, tabbed valances, porcelain birds mounted on giltwood brackets—a huge Sutton Place South penthouse in New York City. “It was not an apartment for a normal family,” C. Z. once observed of the palatial duplex, built for her mother-in-law in 1927, later subdivided, and sold in the early 1960s. “We lived on one side, and my son, Alexander, lived with Nanny on the other side.” Later gutted and made magnificently mod, the upper floor now belongs to Lisa Perry, the fashion designer and art collector; Bill Blass lived in one of the downstairs sections.

In 1960, per society scribe and C. Z. friend Elsa Maxwell, Boudin advised on the “chairs, curtains, and lighting” of an earlier Guest house called Templeton, a family estate that was in the couple’s possession for about a decade. That property was an extravagant 55-room pastry (Suzy, the syndicated gossip, called it “terribly grand”) of redbrick, frosted with elaborate white-marble details and set amid more than a hundred acres in the Old Westbury area of Roslyn, Long Island. Architect Thomas Hastings of Carrère & Hastings (the blue-chip firm behind The New York Public Library as well as what is now the Frick Collection) and the deluxe decorating establishment Charles of London completed it for Alicia and Alfred I. du Pont in 1917; the clients christened it White Eagle. In 1921, a lawyer acting for the Phipps steel family purchased White Eagle at a private auction, and soon it became the country house of Winston Guest’s parents, the former Amy Phipps and her husband, the Rt. Hon. Frederick Guest, a British politician who was a grandson of the seventh Duke of Marlborough. They renamed it Roslyn Manor. Upon Amy’s death in 1959, C. Z. and Winston changed the property’s name yet again, this time to Templeton, which carried sentimental as well as prideful associations. Templeton House had been the suburban London home of his grandfather Ivor Guest, Baron Wimborne, but, more important, Templeton had once been the name of Winston and his brother Raymond’s champion polo team.

At Templeton I, Boudin blended together heirloom English furniture with antique French furnishings amid Anglophile architecture to create what Elsa Maxwell called “the most charming house on Long Island.” (Boudin was then also working on the White House, to which in 1961, C. Z. donated the Empire banquettes that stand in the entrance hall.) By 1969, though, the Guests had migrated to another Templeton—let’s call it Templeton II, for clarity’s sake. The rambling redbrick-and-shingle charmer of an English-country-style house became the Guests’ primary address following a financial hiccup. Modest in appearance, even puritanically plain at first glance, Templeton II, built in the 1920s and located about five miles south of the couple’s former residence, lacked its opulent namesake’s strapwork ceiling, marble staircase, and majestic curved peristyle. Ditto its expansive acreage (15.52 rather than 100-plus) and sprawling square footage (11,532 versus 48,000): Truman Capote, a close friend of the family, described it, surely tongue in cheek, as “small and delightful.”

C. Z. and Winston retrenched but they did so with the kind of unblinking panache that characterized every aspect of their boldface lives: “Style is about surviving,” she once observed, “about having been through a lot, and making it look easy.” The building’s lack of pretension and detail offered her the chance to create décors that were dependent on chromatic bravado and sleight of hand rather than architectural grandeur and impressive collections, which had been reduced in any case. Among other necessary divestitures, more than 150 pieces of the couple’s antique European and Chinese porcelain had been sold at Christie’s in 1967, including an extraordinary 18th-century Meissen peacock that was made for Augustus the Strong and which is now at the Museum of Fine Arts, Boston. Choice French furnishings went by the wayside then, too, with one glamorous Régence-style armchair ending up with San Francisco doyenne Dodie Rosekrans.

Intimate, comfortable, and a bit quirky, Templeton II’s rooms subscribed to C. Z.’s preference for the eye catching, which was perhaps her natural wont. After all, in 1944, the former Lucy Douglas Cochrane, daughter of a free-spirited actress turned Social Register doyenne, had strutted her stuff in a Broadway revival of the Ziegfeld Follies, and a newspaper once noted that as a saucy debutante “her decolletages were famous.” Templeton II was also far cozier than Templeton I, approachable rather than aristocratic, despite all the heirlooms on parade. Andy Warhol, after a Christmas Day visit in 1976, admiringly wrote in his diaries that “the decorations and the food and the house were just like a spread in McCall’s or House and Garden,” though he seemed amused that a goodly portion of the seasonal greenery was plastic.

C. Z. clearly had no issue with petroleum-based accessories, as HG’s 1988 photograph of the hall makes abundantly clear. On the window sills and occasionally on the Régence console tables—clearly modeled after the work of Daniel Marot, the French architect and designer patronized by William III of England—towering orchids and variegated-ivy topiary spheres were insouciantly displayed in green plastic pots carried straight in from Templeton II’s two greenhouses. It was a decision that surely would have raised one or both of the Duchess of Windsor’s expertly manicured eyebrows. Wallis Windsor had been C. Z. major style mentor, and in the younger woman’s opinion, “There was never any better teacher.” Boudin “had done the duchess’s house in Paris, and I loved it,” C. Z. told Condé Nast editor André Leon Talley in 1988. Thus, the native Baltimorean’s taste would be echoed in her Boston-born acolyte’s homes.

As in the Windsors’ vast Bois du Boulogne hall d’entrée, the woodwork of the Guests’ corridor, dining room, and library—cornice, door and window frames, window reveals, radiator covers, skirting boards, even the mantel—was vividly marbleized in spinach-green veined with ivory-white, though its jolly, slapdash execution lacked the trompe-l’oeil finesse seen chez Windsor. In fact, there was plenty of frankly fake faux-marbre splashed around at Templeton II, from apricot (the living room and C. Z.’s bedroom) to black (the entrance hall) to spinach-green again (in C. Z.’s study), dressing up the pedestrian moldings and giving them a kind of Venetian-style stage-set nobility. The walls of the dining room and hall were tinted to complement with almond-green paint that had been dragged, a technique hardly seen anymore, perhaps because there was an overdose of it in the 1980s; the vertical special effect breaks up the color and adds subtle rhythm and variation. The adjacent library was wrapped in L’Indus, a Braquenié printed cotton that must have been particularly favored because it lined C. Z.’s Templeton II bedroom, too, though in a honey-tone colorway. L’Indus is out of production at the moment but as a Braquenié representative noted, “It is available for printing on request.”

The only mystery concerning Templeton II’s good looks is who gets the credit. C. Z. claimed that Boudin did the honors, despite the fact that the éminence grise had shuffled off this mortal coil two years before the Guests moved in. Decorators J. Allen Murphy and Robert E. Tartarini entered her orbit at some point, and Françoise de la Renta, Oscar’s first wife, a Paris Vogue editor-in-chief turned Manhattan decorator, provided an assist, too, though it’s unclear precisely where and how. An insider avers that no matter who came along later, Paul Manno, the manager of Jansen’s New York office, was the initial aesthetic mover and shaker at Templeton II, springboarding off the beloved schemes that Boudin had conjured up for the Guests’ penthouse and using handsome French and English antiques from Templeton I. (Another source recently told me that C. Z. considered Boudin “a kind of father figure” and Manno “her fun and wicked brother.”) So, one could argue that the decors began as Boudin, just at one remove, though on a leaner budget, with a simpler vision, and in an unassuming setting.

Templeton II’s hall, in addition to its atmosphere of unquenchable bravado, spoke, as all good rooms do, of personal interests, collecting instincts, and attitudes toward life. Sporting art of various vintages was on display, bearing witness to the Guests’ passion for polo playing, fox hunting, and horse racing. (That being said, C. Z. was so allergic to horses that “I always wear gloves when riding.”) The virile console tables must surely have been part of the interiors that were enjoyed by Winston’s parents in the 1920s or perhaps they had made their way across the pond from Aldford House, an 1890s London mansion that the senior Guests purchased in 1912; in any case, their bold cabriole legs seem to embody the magnificence of the horses that lived in the property’s 17-stall stable. The potted plants cue C. Z.’s enthusiasm for gardening as well as her late-in-life career as a garden guru. (She also served as the president of Italian furniture designer Willy Rizzo’s American showrooms in the 1970s and licensed her name for an aborted sportswear line a decade later.) As for the leopard-spot carpeting from Stark, which made its way around the house, C. Z. once explained that she deployed it for the most basic of reasons: “not only because it’s terribly chic, but it simply doesn’t show dog paw.” Release the hounds.

These Under-Sink Cabinet Organizers Are Life-Changing