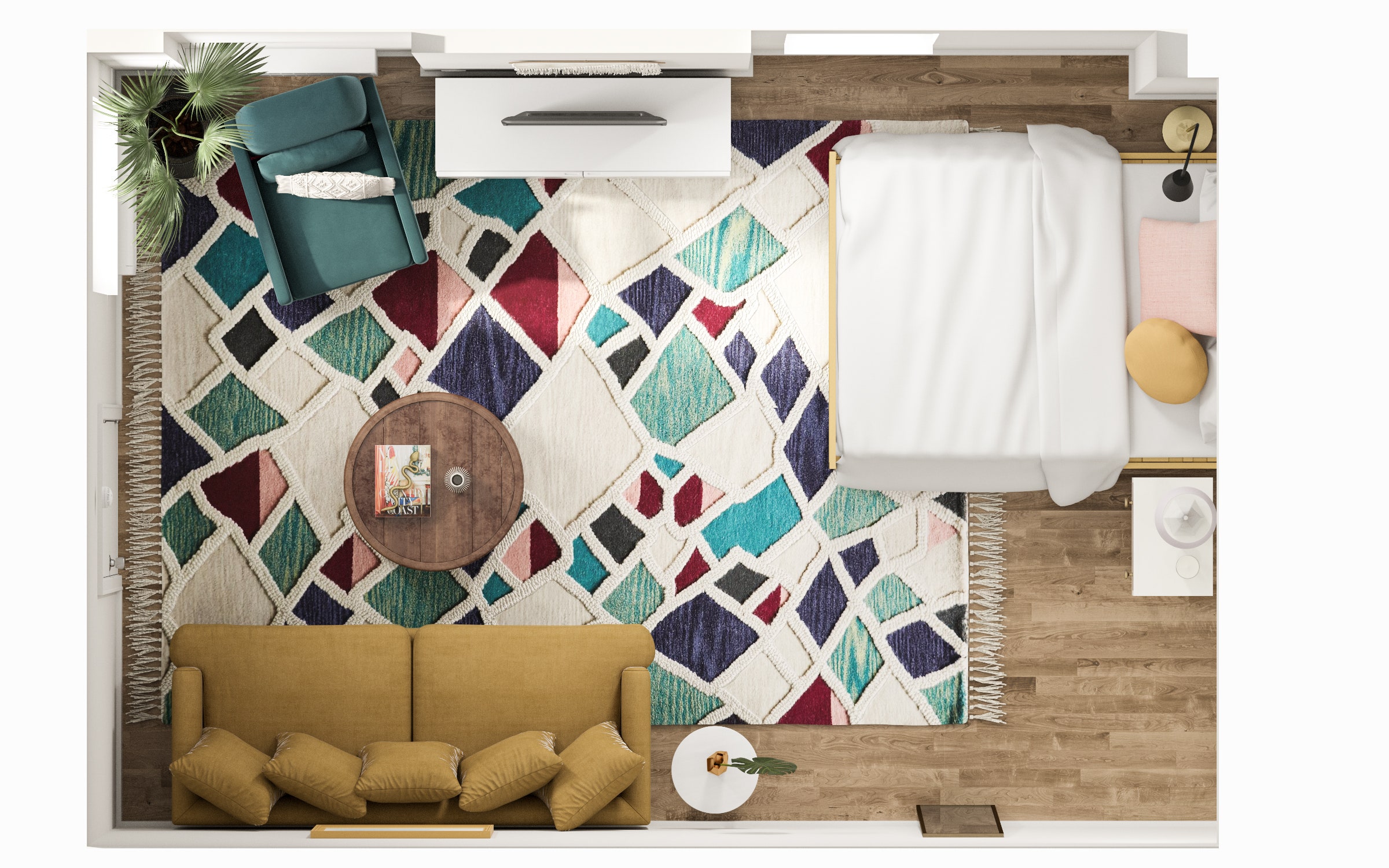 I reached a major milestone this month: I officially moved into my very own apartment, sans roommates. The last serious life change I went through had to be graduating from college and moving to New York City a few weeks later, and that was seven years ago. My new place feels big, but in reality, it's very small. This being Manhattan, I couldn't afford a palatial estate (a.k.a. a true one-bedroom) by myself. So, my new apartment is essentially one big room, meant to serve as sleeping quarters, dining area, den, and work-from-home space. (I'm lucky that my kitchen—which could pass as a hallway—is so small, is tucked away.) That's a lot of functions to squeeze into a mere 190 square feet, and being new to studio apartment life, I needed some advice on how I was going to lay things out.

I immediately reached out to Modsy, the amazingly realistic 3-D room design service. We just teamed up with them to do Clever room makeovers in minutes, so I knew they'd be game to help me figure out my studio situation. A couple of days after I filled out a design survey and answered a few questions about my apartment, Modsy designer Karina sent me two different furniture arrangements, complete with real products I could buy right from the renderings. One of them I had guessed might be a good option; the other came out of left field and blew my mind.

Layout 1: Bed against the right wall

Karina and I got on the phone to talk through each design (this isn't an editor perk, it's part of the Modsy service!). For both, she told me, "I wanted to give you a nice breezeway and also give you different sections." Mainly, an area for my bed and a common area for lounging, working, snacking, and so on. In the first layout, my bed is pushed against the far right wall, which is where the previous tenant had put hers.

The rest of the space is grounded by a mustard-colored sofa, which faces an armchair (hooray for extra seating!) and a TV on a cabinet with lots of storage. It would require me to eat dinner on the couch, but ultimately, this layout wasn't a hard sell. I had previously announced it to be the "only layout that works," and now I had a 3-D model as proof.

Layout 2: Bed against the main wall

This is the one I didn't see coming. In the second design, Karina placed the bed under one of the windows on the longest wall, in a shallow nook I had deemed too small for a queen without ever measuring it. Clearly, I was wrong and Karina was so right. She put the sofa on the same wall, with a nightstand in between for the two pieces of furniture to share.

This arrangement gave Karina room to add another area that was missing from the first layout: a separate spot to eat and get work done. An acrylic console table opposite the bed is so airy you barely notice it, and perfect for solo meals when you pull up a chair. This is why you hire the pros, people.

I just moved into my apartment this weekend and I tried both layouts IRL. In fact, I've moved my bed to each location multiple times. Everything fits just like in the Modsy renderings, but I haven't landed on a favorite setup yet. That's the great part about one-room living, though: I can switch things around whenever I want with very little effort. Yeah, this feels big.

How C.Z. Guest Turned a Simple Hallway into a Uniquely Fabulous Space