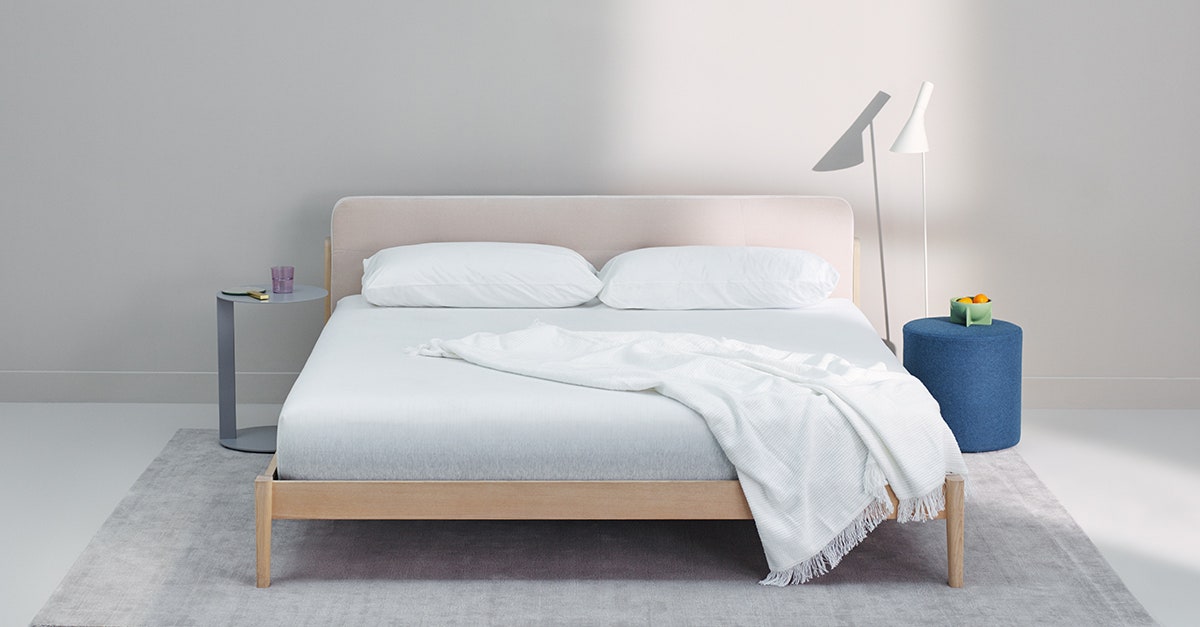 On an otherwise average Tuesday, an email popped up in my inbox from Casper, asking if I'd like to test their new Wave mattress. Duh, I wanted to try its "groundbreaking mattress" with a "patent-pending support system [that] actively mirrors the shape of your body at 36 specific points for the deepest, most restorative sleep." I know, being an editor is a super tough job. Fast-forward a month. I've been sleeping on the Casper Wave for a little more than 30 days, and so. much. has. happened. Since I interview people for a living, it only made sense for me to tell this tale by interviewing . . . myself.

How did the delivery process go?

I quickly arranged for the mattress to be delivered later that week. Not just any delivery, but white-glove delivery. I'm sorry to tell you no white gloves were actually involved; however, a delivery man did heft the 109-pound mattress up the four flights of stairs—60 very rickety steps—to my apartment. He deserves a two-week vacation just for that.

I had told the Casper representative I wanted my old mattress taken away when the new one came, because apparently I have no loyalty when it comes to sleeping surfaces. (My IKEA mattress was seven years old anyway, and The Better Sleep Council says that's exactly when it's time for a replacement. Yes, I looked this up after the fact to make myself feel better.) But I found out that there was no mattress removal request on file after all, which meant I needed to move the old mattress myself, which turned into me paying the delivery man to help me drag the way-too-heavy thing down the stairs. I questioned everything in life for 20 minutes, but it all ended with me watching the Casper Wave puff up to full size on my bed frame, an admittedly very satisfying experience.

In case you're wondering, Casper was horrified and sent me a set of sheets and pillows for my trouble. (As you'll recall, editor life is really tough.)

I immediately threw myself rather aggressively onto the mattress to see what would happen. My first impression: Rather than airy and bouncy, the Casper Wave is dense; there's some serious sinkage—but to clarify, it's the good kind. Lying on my back, I noticed that my hips and shoulders settled deeper into the mattress than the other parts of my body, as Casper advertised they would. Same thing when I was on my side. (According to the website, "precision contouring under your shoulders relieves pressure and aids in proper spine alignment for all sleep positions. A reinforced polymer network complements the curves of your back and hips for firmer support where you need it most.") Once I wrangled some sheets onto the mattress (is there anyone who doesn't hate making their bed?!), I fell asleep easily.

Is it worth the cost?

A queen Casper Wave costs $1,995—that's an uncomfortable percentage of my paycheck and $1,000 more than the original Casper. Granted, the Wave has an extra fifth layer of foam and that "precise support at 36 points" compared to the original's general zoned support. It delivers what Casper says it's going to deliver: My shoulders and hips definitely felt more cradled than on the old mattress and the foam never made me overheat. It's a lot of money no matter what, but if you're really into those features, it could be worth it for you.

I don't know why you wouldn't trust my very official opinion, but if you're skeptical, I asked my roommate and my boyfriend to sleep on the mattress (on different nights!) and tell me what they thought. Here's their feedback, verbatim and also very official:

Unsolicited text from roommate:
You bed is a dream. I never want to wake up. It's like a cloud.

Boyfriend interrogation via text:
Boyfriend: I feel like you don't toss and turn in it. It's so dense that it's too much work to toss and turn.
Me: Are you saying that's a positive?
Boyfriend: Yeah.

Full disclosure: From the first night I slept on the Casper Wave, I woke up feeling 30 years older thanks to a stiff upper back. Good times. Due to the shocking fact that I'm not a professional mattress tester, I had no real sense of why this was happening. So, I did what any good editor would do and asked the American Chiropractic Association to put me in touch with an expert. Enter Dr. Robert Hayden, who has a private practice in Georgia just south of Atlanta. I gave him a ring and asked him point blank: Was the Casper Wave causing my back pain? "This is a very common question," he says. "We see this issue quite often. When you sleep on your back, you need a little roll behind your neck just to keep that normal cervical curve. When you roll over to your side, your needs for a pillow are very different. You may be creating stress points when you don’t have the right pillow height."

Yes, as if life wasn't already complicated enough, apparently your pillows can one day decide to turn against you. But this revelation happened to reveal a silver lining: Casper had sent me its pillows, remember?

"We invented a unique pillow-in-pillow design that’s built to satisfy all sleepers," Casper says on its site. "The inner pillow is supportive, while the outer pillow adds a soft touch of fluff." As I told you, I apparently have no loyalty to sleeping surfaces, so I threw my old pillows by the wayside to try the Casper ones for a few nights. They remind me of those cushy down pillows you find at hotels, except they don't get super flat over time (major plus). Off to sleep I went, and I woke up feeling . . . better!!! At least 20 of the 30 extra years I'd been feeling were shaved off; my back felt three-quarters less stiff. Of course, I can't claim there's any science behind all this, but it's what happened, folks. I started out testing a Casper mattress and ended up testing—and telling anyone who cared to listen about—their pillows. Oh, life as an editor.

North Texas Property Management Announces Post on Being the Best…