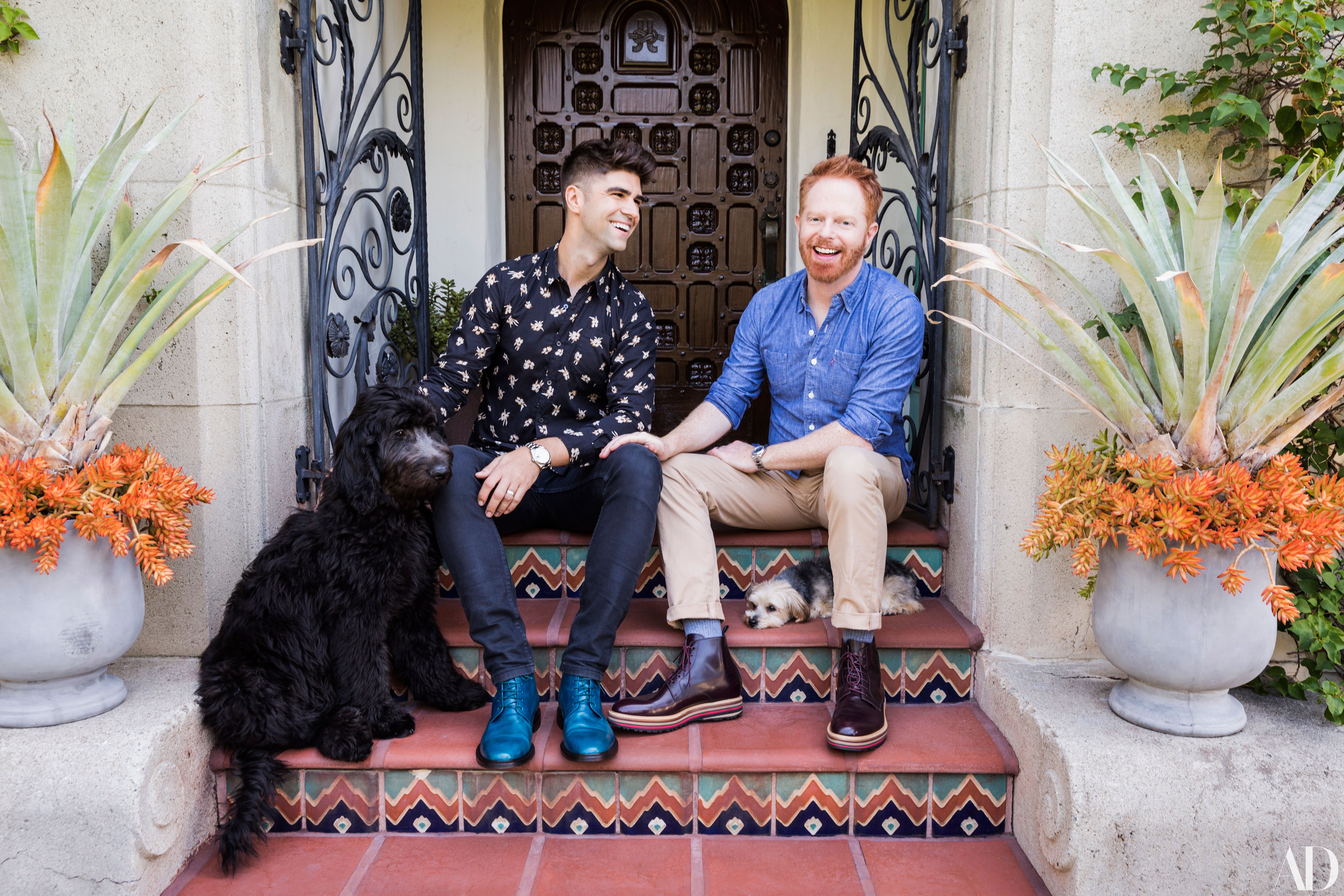 Even without stepping inside the cyan-trimmed 1928 Spanish Colonial of Jesse Tyler Ferguson and his husband, activist and social innovator Justin Mikita, one fact is crystal clear: The couple excels at the delicate art of balancing kitsch and class, their cheeky wit fusing with aesthetic prowess. It’s a mashup of informal and formal that feels cozy and intimate in a way that betrays the Loz Feliz house’s size and the could-be severity of its original Gothic-inflected interior finishes—painted ceilings, stained glass, and ornate wrought iron. Perhaps the most exemplary juxtaposition: A “Homo Sweet Homo” mat welcomes guests through the impressive arched entry vestibule.

Ferguson and Mikita worked with Will & Grace set decorator–cum–interior designer Peter Gurski to fill the four-bedroom home, which clocks in at nearly 5,000-square-feet. (Ferguson met Gurski on the set of the 2007 show The Class. “I said, ‘Here’s my number if you need help buying anything,’ and he called me about a chair,” says Gurski.) Still, the design of the home is highly personal; most of the items inside it imbued with meaning.

The couple previously lived in a classic midcentury-modern house; now their home consists of a soaring foyer marked by not only a dramatic black birdcage chandelier but portraits of explorers on its domed ceiling and rare plaster “rug” worked into the wall, relics of a far more formal era. The Los Feliz pad and its resort-style dual-level pool that sends water cascading over curvilinear aqua-tiled walls (Ferguson calls it “ostentatious and very perfect for this house”) was previously owned by Gwen Stefani and Gavin Rossdale, and after that Robert Pattinson. In Ferguson’s and Mikita’s version of the home, the Gothic vibe is far more discerning than ingratiating.

Throughout the home, art choices almost always encourage a laugh. Take the giant portraits of their dog Leaf (named after Ferguson’s character, Leaf Coneybear, in the Broadway play The 25th Annual Putnam County Spelling Bee) and oversize Aztec-esque robots from Natural Curiosities they chose in lieu of otherwise more serious paintings. Collecting is a relatively new interest for the couple that came along with the purchase of this home. But they don’t take themselves too seriously: “There’s this place called Urban Outfitters, I don’t know if you know it,” says Ferguson wryly of where they’ve shopped without Gurski’s help (a pink neon heart from the chain store hangs unironically on their gallery wall).

This tongue-in-cheek irreverence blends beautifully with soulful artwork like a piece showing dual heartbeat lines called Lovers, found in a little Silver Lake Store, and a handful of paintings by Cuban art students, obtained during a trip to the island. “Each piece tells a different story of where we were, where it came from, which we love,” says Ferguson, a frequent traveler. Art purchases are all joint decisions, and they’ve enjoyed learning about art together, recognizing the feeling of being pulled to something whether mass produced or one-of-a-kind. “We’re not snobby about it; it’s about emotional attachment,” they say together, practically in unison.

That ethos explains their biggest living room pieces: a seasoned vintage Steinway & Sons grand piano—“We bought it knowing that when we have kids, we will force them to take lessons like we were forced,” says Mikita—and a giant metal horse. The latter came about during an exercise Gurski devised to build a dialogue with Mikita, since he already knew Ferguson’s style. On a trip to West Hollywood’s Pacific Design Center, Gurski posed the question: “Justin, what is it you love?” Of course, for their totally empty new home Mikita immediately selected “the most impractical thing: a huge horse made of bike and car parts,” says Ferguson, who claims to be the more design savvy of the two. “Justin loves seeing a ‘wow’ item and being like, ‘I want that.’” For Mikita, it was a knee-jerk reaction to the “beautiful giant structure” at Timothy Oulton that never would have fit inside their first home.

Thanks to the stallion, an animal theme now flows throughout the house. It ultimately informed their approach to design, says Gurski, “Like, not to be too serious, because it’s a very formal house. We thought, let’s be kind of cheeky and fun—that’s what Justin brought; he loosened it up.” The elegance of the Gothic paintings, coffered ceilings, plasterwork, stained glass, and painted tiles didn’t intimidate Ferguson, a New Mexico native who “knew how beautiful it could be. I felt like with the help of Peter you just have to embrace that and go boldly forward and not be afraid of color and pattern clashing.” When they bought it every room was white, “immaculately Spanish,” says Mikita; now there are just a handful of spaces that invoke that, though Gurski would happily paint or wallpaper the rest. Along with his styling abilities, he brought connections: Many of the customized furnishings were actually built or upholstered at studios like Warner Bros., others are from stores all around Los Angeles. “I don’t think there’s anything we wouldn’t want someone to have a glass of red wine on,” says Ferguson, which is a good thing since they entertain frequently, having dinners that turn into cocktail parties and pool days with the barbecue fired up. (Last year they hosted a dinner party for the whole Modern Family cast.)

The result is rich, humor-filled, and heartwarming—words their marriage also seems to embody. In a way, their relationship was put to the test by the massive project of buying and designing a home immediately after their wedding. Compromise was the biggest lesson learned, says the actor. The give and take “is more palpable when you’re actually looking at things: That was Justin’s, this is mine, that is something we love together. But when you look at the house as a whole, it’s very cohesive and works together, and I think that’s a testament to what marriage can be.”

Says Gurski: “Of all the couples I’ve worked with, their design relationship evolved the most.” And it’s still evolving, with new projects taking shape continuously, like repainted kitchen cabinets that pop nicely on Ferguson’s online cooking show, and an expanded upper deck that made a rudimentary platform into a cabana with a fire pit. “Peter got a lot of texts from both of us saying, ‘You tell him . . . ’” Ferguson admits. And, says Gurski, “That little nudging here and there made it all fit together like Jenga.”

Related: Debra Messing Gives AD a Tour of the New Will & Grace Sets