Home News Lever House Is Transformed by Peter Halley For His Largest Installation to... 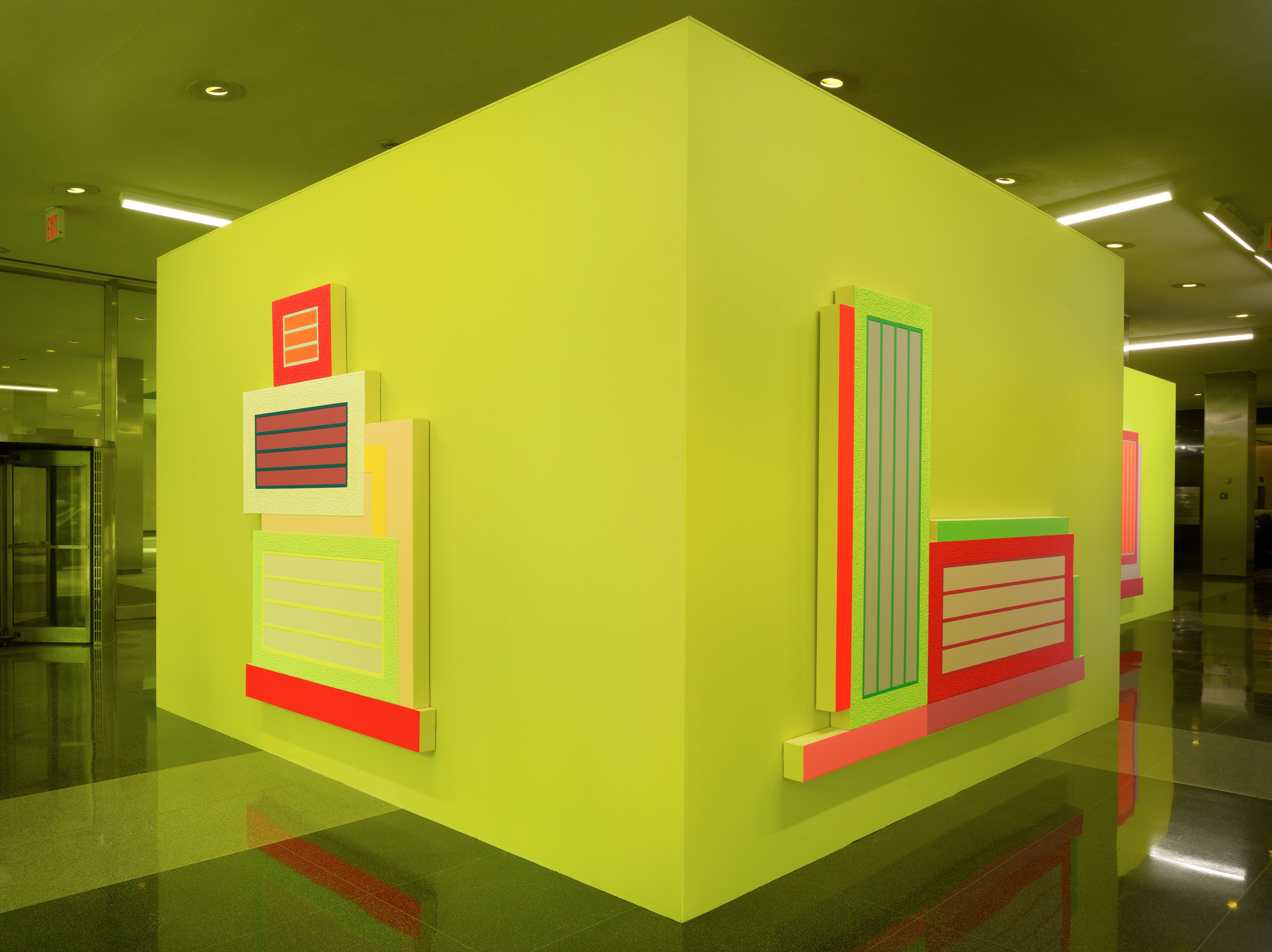 When dusk falls on Park Avenue this autumn, passersby will have a hard time ignoring the fluorescent yellow glow radiating from East 54th Street. For three months, the entire set of windows wrapping around the second floor of the iconic Lever House will be clad in yellow window film, illuminated by tinted ceiling lighting from within. This is no optical illusion; rather, it's the work of American artist Peter Halley, who is staging his latest project inside the storied midtown building.

The new work, titled New York, New York, is a site-specific, immersive installation that spans the first two floors of the SOM-designed building. Curated by Roya Sachs, the exhibition is Halley's largest, most ambitious New York City project to date, composed of a mix of paintings, lighting works, and a Tetris-like labyrinth that sits in the center of the lobby. At first glance, the neon yellow structure appears to be little more than temporary walls erected to exhibit a selection of Halley's new paintings, but a walk around the perimeter reveals an entrance into the templelike form. A series of interior passageways, whose walls are collaged with digital reproductions of pages from notebooks the artist kept in the 1980s to chart the development of his paintings, lead the viewer deeper into the structure's center, which is hidden entirely from the outside world. The second chamber, illuminated by color-shifting lights, is covered entirely in an uneven grid of his Exploding Cells—a visual he employs often to symbolize change and instability. The third room, the heart of the labyrinth, is a dense network of interlocking rectangles, lit only by a few thin strips of black light above.

Though each room exists as its own environment, their symbiotic relationship creates a larger, more complex work. Halley intended for viewers to walk through the structure as if they were stepping into one of his paintings; a journey that uses all of the components of his visual language (the interlocking rectangles, the prisons, the cells, the vibrant yellow...) to create a full-body experience of his work. For this installation, Halley drew his inspiration from the tomb of Nefertari, which is considered to be the Sistine Chapel of ancient Egypt. He was also intrigued by the narrative sequence between exterior and interior; lightness and darkness; impersonal size to large, urban scale. In his most complex installation yet, Halley has created a meditative hideout from the cacophony of Park Avenue, just paces away.

The lobby of the Lever House is one of the most unique exhibition spaces in New York—it eschews the traditional white-cube presentation in favor of showcasing works to a broader audience, both those within the building and those just passing by, and provides a canvas unlike any other for artists to intervene. In the 18 years the Lever House Art Collection has been commissioning works, the space has been transformed by the likes of Keith Sonnier, Jeff Koons, Tom Sachs, Barbara Kruger, and John Chamberlain, among others.

It's fitting that Halley chose to stage his first venture into three-dimensional works in a building with strong architectural significance. Built in the International Style, Lever House was one of the first buildings in New York City to have a curtain wall of decorative windows, second only to the U.N. building. But the installation's location holds other significance, too. "I grew up in midtown, just a few blocks from Lever House. It was constructed the year before I was born, so it was always part of the landscape of my childhood," said the artist in a statement. "The lobby is a classic Mies van der Rohe glass box. It provided an irresistible opportunity to create a postmodern intervention within this paradigmatic modernist space."

New York, New York is on view at Lever House until December 2018.

A Small Kitchen Backsplash Makes So Much Sense | Architectural Digest