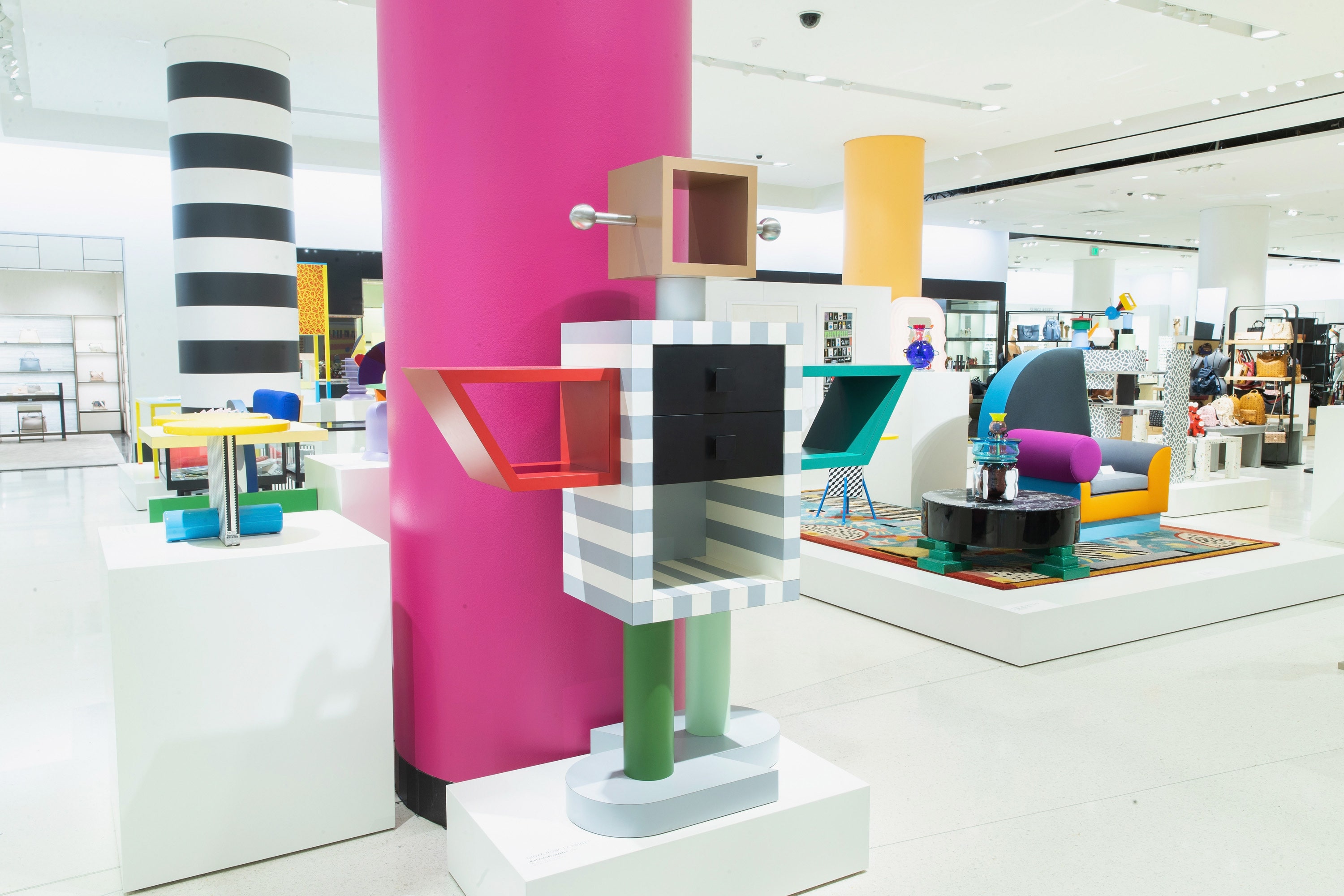 Growing up in 1950s L.A. Peter Shire began his aesthetic education in a rather unconventional place: the department store. "I loved them," gushes the designer and founding member of Memphis, a radical 1980s design movement organized by Italian architect Ettore Sottsass. "The one my mother frequented was Bullocks Wilshire and it was scintillating, a destination, an excursion that was really looked forward to. You would get to see all of these exquisite, hand-made objects."

His childhood obsession comes full circle today as Shire makes a mark on one of today's luxury shopping equivalents: Nordstrom. For a Memphis design-themed pop-up at the Seattle, Washington, flagship, he has collaborated on an environment he calls "about 1,200 square feet of pure ecstasy—it’s painted up and colored up and the Memphis pieces are really intense." Here, his famous Bel Air chair and the Brazil table join a batch of 18 Memphis pieces on display alongside more affordable, Memphis-inspired designs from brands like Areaware, Paper Chase Press, Cofield, Volta, Wary Meyers, and Studio Sophia Sophia.

This is all the brainchild of Olivia Kim, Nordstrom’s VP of Creative Projects."I’ve been a huge Memphis fan since I was a child," Kim tells AD PRO. "I remember going to ESPRIT in San Francisco when I was eight- or nine-years-old and falling in love with the store more than the clothes." She began her own collection of Memphis some years ago and, with the launch of SPACE, a shop dedicated to emerging designers, in 2015, she filled it with the kooky and colorful design forms of the 1980s and 90s. But now, as Memphis mania seeps ever more into the mainstream, she proposed an exhibition for the Seattle flagship that would educate and inspire customers about her favorite design movement.

"I don’t expect every customer to come in and walk out with a Carlton bookcase," she explains, a reference to Ettore Sottsass's famous abstract shelf, the unofficial poster child of the movement. "It doesn’t have to be so transactional."

Still, there are plenty of things to buy: From colorful $10 toothbrushes by Morihata and squiggle-printed $5 greeting cards from Bash to the pricier hallmarks of the movement curated by America's original Memphis dealer, Keith Johnson. Shire has even designed a new, limited edition poster—a custom font set against an abstracted pattern he plans to make into a rug—that will be sold and signed at the opening.

"The excitement lies in the fact that all of this has all come together in Seattle, Washington of all places," says Kim. "These pieces they’re not easy to find. They’re big, they’re hard to move, collectors often have them stored away out of sight. For a lot of people this may be the first time they’re seeing it live and in the flesh."

Kim's obsession with Memphis echoes that of aesthetes across the globe. But what is it about the eye-popping design movement and its modern spin offs so thoroughly re-captured the public interest?

"It's a ubiquitous question," Shire is quick to point out, but he does his best to answer: "Maybe it was somewhat dismissed because it was fun. But this is one of the design movements of the 20th century. How are you going to argue with that?"

Clarke Introduces The Galley Workstation to New England Designers and…