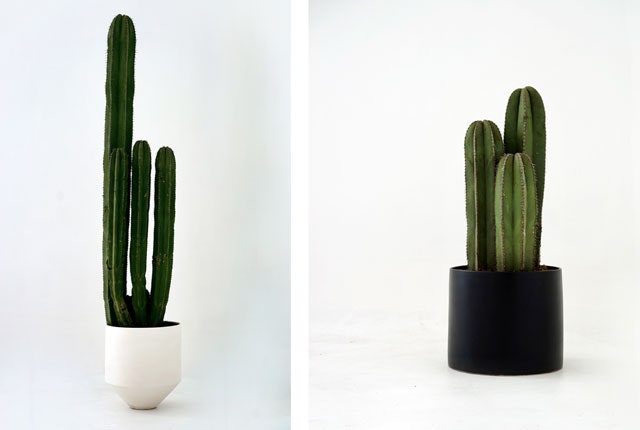 The legacy of the Case Study House Program—a series of homes built by iconic architects, including Charles and Ray Eames, Eero Saarinen, and A. Quincy Jones between 1945 and 1966 in California—is the crux of much of the stylistic associations with the now-ubiquitous term midcentury modern. With natural materials and open floor plans, the group of homes forever changed American architecture. The Walter Bailey House (or Case Study House number 21), by Pierre Koenig, is an example that has stuck with Sam Bigio for decades. The home’s striking combination of steel and glass was softened with an overflow of greenery cultivated in curved earthenware planters—a recurring theme that was captured in historical images from the design experiment.

“I was always infatuated with the Case Study House interiors shot by Julius Schulman and Ezra Stoller,” says Bigio, founder of ceramic company Monstruosus. “And finally I asked myself, ‘Why can’t I find those beautiful planters today?’” While studying the history of decorative arts at Parsons in New York City, Bigio worked as the styling manager for furniture manufacturer Herman Miller, with one of his main responsibilities being sourcing plants and other decorative objects for the showroom. “I had difficulty finding really beautiful yet simple planters for the showroom,” he recalls. “I didn’t want to do fiberglass or concrete—it seemed too harsh for that kind of environment.”

After taking his search for handmade earthenware pots to their native California, Bigio was disappointed to discover that the factories that formerly produced the midcentury wonders had moved on to other endeavors. So, Bigio started Monstruosus, which adopts the pottery of the 1950s and ‘60s as inspiration for new, contemporary designs. “We respect the material and cleanliness of the lines of past ceramics without copying their structure verbatim,” Bigio explains.

As a nonnegotiable aspect of Bigio’s business model, the planters had to be constructed from earthenware. Though he was easily able to source the material from England, finding a studio that still produced the complex pottery proved to be more difficult. After a year of asking around the design community, Bigio finally stumbled upon a small operation in Portland, Oregon. There, ten artisans pour the wet clay into a plaster mold through a slip-cast technique. Following the removal of the mold, they create a polished texture by shaving and sculpting its shape to reflect contemporary proportions. “All the pieces are very similar to one another, but, because it’s a live material and takes time to cure, there are some subtle differences. There’s a human quality to it,” says Bigio.

Once the planters have dried for four to five days, they are baked in the kiln at just under 2,000 degrees, then painted with a matte glaze of black or white before returning to the kiln to seal their enamel finish. Bigio’s three cylindrical configurations reflect the simplicity of the midcentury planters that motivated the beginnings of Monstruosus. However, slight adjustments to the height, diameter, and density offer a refined aesthetic that modern-day ceramic collectors will appreciate. “The idea behind Monstruosus is not to reissue designs from the past, but rather [to] use the midcentury vernacular as inspiration to move forward with contemporary versions."

AD Editorial Team - March 26, 2020
0
ASPRS is the original geospatial organization, founded in 1934, and is responsible for our mapping standards and our credentials. I’ve been very fortunate in...

Ramtech Wins Best of Show and Two Awards of Distinction at...