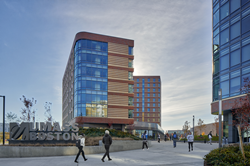 Positioned at a gateway entrance to campus, UMass Boston's New Residence and Dining Hall is the campus' first residence hall.

Capstone Development Partners (“Capstone”) announced that the New Residence and Dining Hall at the University of Massachusetts Boston was awarded the Project of the Year: Student GRAND award at the Multifamily Executive awards ceremony held on October 3rd in Las Vegas, NV.

The project was selected from among 300 entries across 14 award categories. This year’s judges looked for award entries that stood out from the rest of the pack for their outstanding design, remarkable architecture, creativity, and inventiveness. The project was judged on multiple criteria including: floorplan and site plan efficiency, creative use of building materials, and interior and exterior design quality; architecture, including curb appeal, specific needs of the target market and how those needs were addressed; response to unusual constraints or opportunities; involvement with government and/or community officials to bring the property to fruition; green features of the project or sustainable practices used in the building process; amenities package; and financing used for the project.

The new residence hall is the first on-campus housing at the University and houses over 1,000 first year and transfer students. It includes a 500-seat dining hall that serves the entire campus, along with living-learning amenities that support student success.

“We are delighted that this new residential community has been so well received by students and has effectively supported UMass Boston’s goals for recruitment, retention and the enhancement of campus and student life. We appreciate this and other awards the project has earned, but are most gratified to have helped deliver quality housing at the most affordable rates possible for UMass Boston students, while helping solve the chronic housing shortage in Boston. Our public-private partnership model is an effective option for institutions and communities seeking to address similar goals and challenges” said Jeff Jones, CDP Principal.

The receipt of this award marks the second accolade the project has received since its opening in September 2018. This is Capstone’s seventh Student Housing Project of the Year Award from Multifamily Executive since receiving its first in 2007 for the mixed-use Charles Commons project at Johns Hopkins University.

The UMass Boston project was designed by Elkus Manfredi Architects; constructed by Shawmut Design and Construction; and is operated by COCM. The engineering team included Haley Aldrich, Nitsch Engineering, WSP, McNamara Salvia and AHA Engineering. Copley Wolff Design Group was the Project’s landscape architect. The project was financed with tax-exempt bonds and is owned, subject to a ground lease, by Provident Commonwealth Educational Resources, a 501(c)3 non-profit organization.

The Casita by Manorwood Homes wins Modular Home of the Month