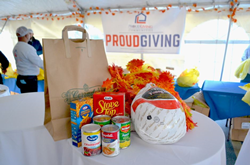 “This growing annual event is a testament to ProudLiving’s dedication to the areas it serves,” said ProudLiving Companies President and Founder, TJ Caleca.

ProudLiving Companies, a New Jersey-based real estate company with a mission of long-term neighborhood revitalization, partnered with five New Jersey municipalities to distribute Thanksgiving turkeys this week to needy families. The company worked alongside mayors’ offices in East Orange, Newark, Irvington, Plainfield and Orange for the giveaway, which took place on Nov. 23 and Nov. 25. ProudLiving funded the cost of approximately 1,000 turkeys for the cause.

According to ProudLiving President and Founder TJ Caleca, the Thanksgiving initiative is just one component of the company’s dedication to its communities, where it serves as a contractor, developer, realtor and community partner.

ProudLiving employees also helped load the turkeys onto trucks and distributed them across 11 locations. What’s more, the 2019 event marked the first community giveaway held in conjunction with the Orange Police Department.

“For this giveaway, we collaborated with community leaders and gave back in order to nurture and strengthen community bonds,” Caleca said. “This growing annual event is a testament to ProudLiving’s dedication to the areas it serves.”

Caleca noted that ProudLiving has historically donated Thanksgiving turkeys the Monday before the holiday. This year, it expanded its efforts to serve as many residents as possible – thanks in part to a growing donor base. ProudLiving purchased the turkeys from the East Orange ShopRite, its third year doing so.

The growing company also hosted a separate turkey giveaway at one of its own properties – 60 S. Munn Ave., East Orange. Held Nov. 23 from 10 a.m. to noon, ProudLiving distributed 100 turkeys to residents and community members. The company also received a matching donation of food gift baskets from Corrado’s Market.

Remaining turkeys were given to Mayor Green to distribute to families in need. Members of the East Orange City Council were also on hand for the Saturday event.

“ProudLiving has made its home base in East Orange. In doing so, there is an inherent responsibility to show our gratitude as frequently and personally as possible,” said Isabel Williams, vice president of charitable advancements at ProudLiving. “We want to interface with our neighbors and learn their names and their stories. We pride ourselves on maintaining and nurturing these personal relationships.”

ProudLiving’s ongoing charitable activity focuses on education, children and the elderly. The company also holds an annual “ProudGiving” Holiday Coat and Toy Drive, serves as a sponsor for the ProudLiving Communities Stingers, a youth basketball team in Orange, serves as a strategic partner for the East Orange YMCA and its “ProudSwimming” program, and has a scholarship program with Bloomfield College called “Pay It Forward.”

Earlier this year, ProudLiving partnered with the Cities of Orange, East Orange and Irvington for a “backpack” giveaway prior to the start of the school year. ProudLiving funded the cost of 1,000 backpacks for the cause.

About ProudLiving Companies
ProudLiving Companies is a vertically integrated owner and manager of real estate. Focused on multifamily and mixed-use real estate in New Jersey, the company seeks to acquire deep value-add real estate assets and dramatically improve them. ProudLiving currently owns and manages more than 1,000 apartment units and is always seeking attractive acquisition opportunities. Recently, ProudLiving collected enough land to develop over 2,500 new construction units that are scheduled to break ground in 2020. The company prides itself on taking on previously neglected real estate assets and developing their full potential. ProudLiving also continues its relentless pursuit of being the bar in which social responsibility and continuous professional achievement are measured, following Caleca’s mentality of, “Just do more.” For more information visit http://www.proudliving.com.

This Stunning Polo Stable Is a Work of Art