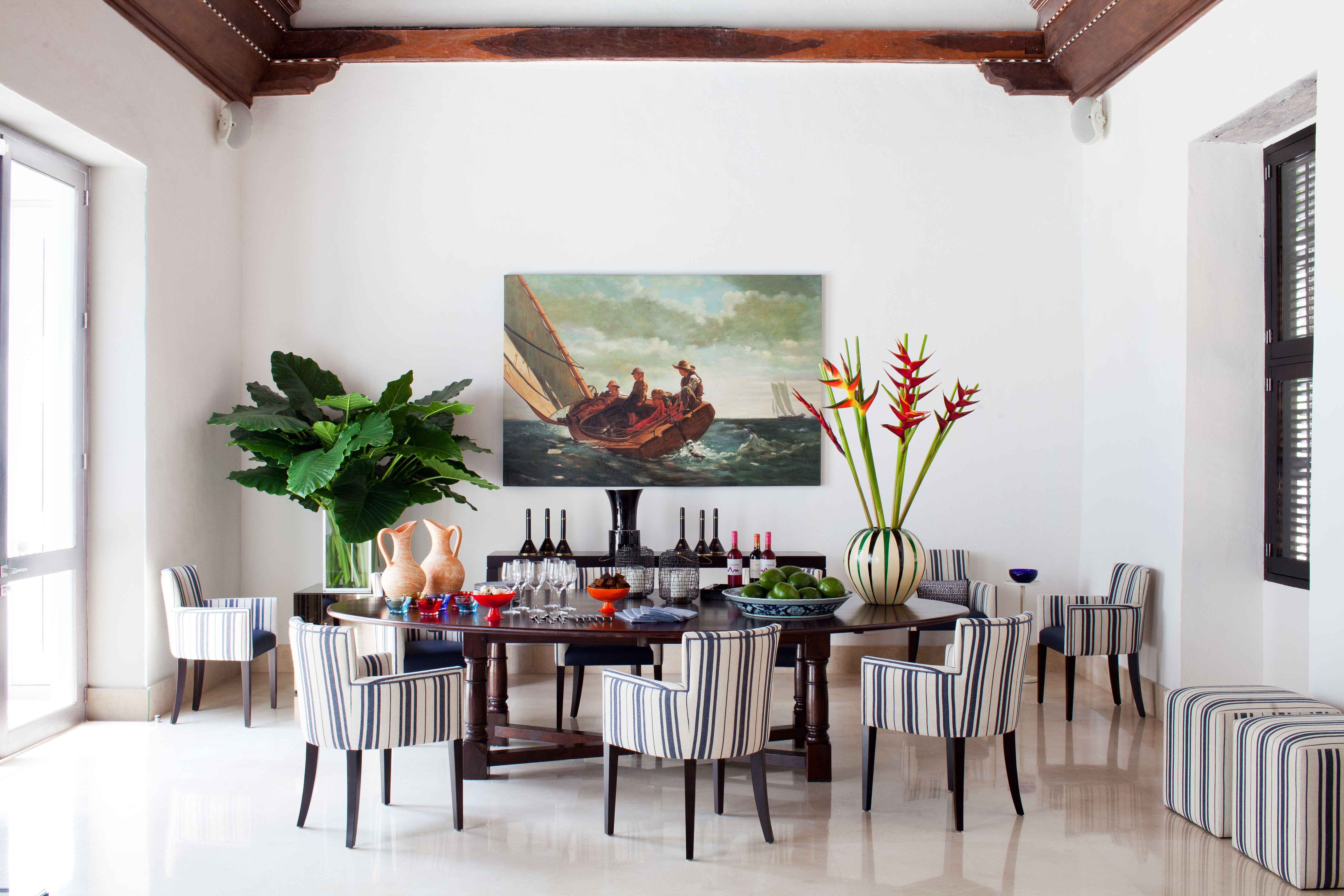 What does one get an interior designer celebrating his 25th anniversary in the biz? Richard Mishaan should be expecting silver surprises from his fans all year long, but “I’ll take anything I can get,” the ebullient New Yorker says with a laugh over a recent lunch at Augustine, Keith McNally’s swoony Belle Époque bistro in the Financial District's oft-Instagrammed Beekman hotel.

A precious metal that can be as streetwise as it can be sophisticated without losing any of its luster, silver is a perfect metaphor for Mishaan’s potent, punchy aesthetic, which was honed back in the 1980s and ‘90s as a young fashion designer with an eye for sporty knits. Back then, Mishaan was one of a coterie of up-and-coming young whippersnappers—Cynthia Rowley, Isabel Toledo, and Tracey Reese among them—that The New York Times hailed as “strong individualists . . . quietly causing a commotion in the fashion world.” By the mid-1990s, though, hemlines and sack suits were behind him. “It’s a hell of a business,” Mishaan explains. But not one without its positive side: He ended up marrying a statuesque model, Marcia Rolfe—she is now a philanthropist and artist—with whom he has two grown children, Nicholas and Alexandra.

But commotions have remained the Bogotá-born designer’s stock in trade, whether the project is an apartment, a hotel, a chair, lighting, or even a line of hardware. In 1998, five years after he turned to decorating, he unveiled his debut interior for the Kips Bay Decorator Show House—and it combined, of all disparate options, Philippines tribal art and fabric by Romeo Gigli, then a cult fashion figure. In a world that was still weaning itself off flowered chintz, Mishaan’s dynamic big-tent aesthetic packed an eye-popping wallop that eventually landed him on the AD100 list in 2012.

Consider his own surprising entrance hall in Sagaponack, New York, a house where I once spent a memorable afternoon full of good cheer and delicious food. There, a towering rococo porcelain ceramic stove of the kind usually found in Danish palaces meets a giant clown-like statue by KAWS, the American pop artist, one of Niki de Saint Phalle’s plump polychrome Nana sculptures, and an exceedingly regal 19th-century side cabinet in the blingy style of André-Charles Boulle, Louis XIV’s favorite cabinetmaker. A prime example of what AD has called Mishaan’s signature “marriage between antiquity and modernity,” that entrance hall—buried deep in a land of shingled houses and lush wetlands—is a magical magpie mash-up that zips across centuries and styles, embracing and even perhaps redefining that oft-maligned word eclectic.

“How can you limit yourself to just one artist or one material? Do you really want to starve yourself?” says Mishaan, whose punchy style has been showcased in the splashy books Modern Luxury (2009) and Artfully Modern (2014). “There are just too many things in the world to like. A room with a Mattia Bonetti chair and a Boulle commode just feels more natural to me than expensive blandness or the really goopy French furniture I used at the beginning of my career—and which I still have some of in my basement. I think we’ve turned the corner from that 1990s hotel-chain minimalism of black and beige to embracing antiques again and more romance.”

Another case in point is the designer’s own office in a Depression-era Tribeca loft building, where he recently hosted a convivial 25th-anniversary dinner for some three dozen of his nearest and dearest, including AD editor in chief Amy Astley. (The menu included succulent wild Icelandic cod and the tenderest, greenest English peas imaginable.) Clocking in at 4,500 sun-splashed square feet, the multiroom pleasure dome sprawls like a penthouse and is inspiringly furnished in a similar fashion. All it needs is a bed and one could easily move right in.

The entrance hall is painted Diana Vreeland scarlet with a matching Chinese-style bench, and the reception area features a fluffy François-Xavier Lalanne sheep sculpture as well as a French midcentury cabinet of Macassar ebony topped with African masks. The ebony-tone floor leads to a conference room that resembles a deluxe bibliothéque from the Art Deco days, with a runway-length gilded mahogany table and sky-high bookshelves in which volumes about Émile-Jacques Ruhlmann, Poul Kjaerholm, and other design and architecture luminaries are interspersed with primitive sculptures, gilded objets de vertu, Asian ceramics, and a little Andrew Zega and Bernd Dams watercolor of an 18th-century neoclassical French folly.

That head-spinning, ultra-colorful accumulation could easily serve as a key to Mishaan’s larger-than-life taste, which he says has been influenced by the designers Tom Britt and Angelo Donghia, the fashion star Halston, and Dorinda “D. D.” Ryan, a best-dressed magazine editor and onetime Halston accomplice who created the costumes for Stephen Sondheim’s 1970 musical Company. It also explains why, of late, Mishaan has been lending his touch to hotel interiors, too, whipping up A-list destinations that are anything but cookie cutter.

“If you’re going someplace special, then the hotel where you stay should feel special, too, and not look like the last one where you booked a room,” explains Mishaan, whose hospitality projects include Tcherassi Hotel + Spa in Cartagena, Colombia, where he and his family have a 16th-century getaway that was featured in AD. "Hotels, like people’s houses, are beginning to look more and more lived in, like great private clubs or wonderful private homes. Personality is back."