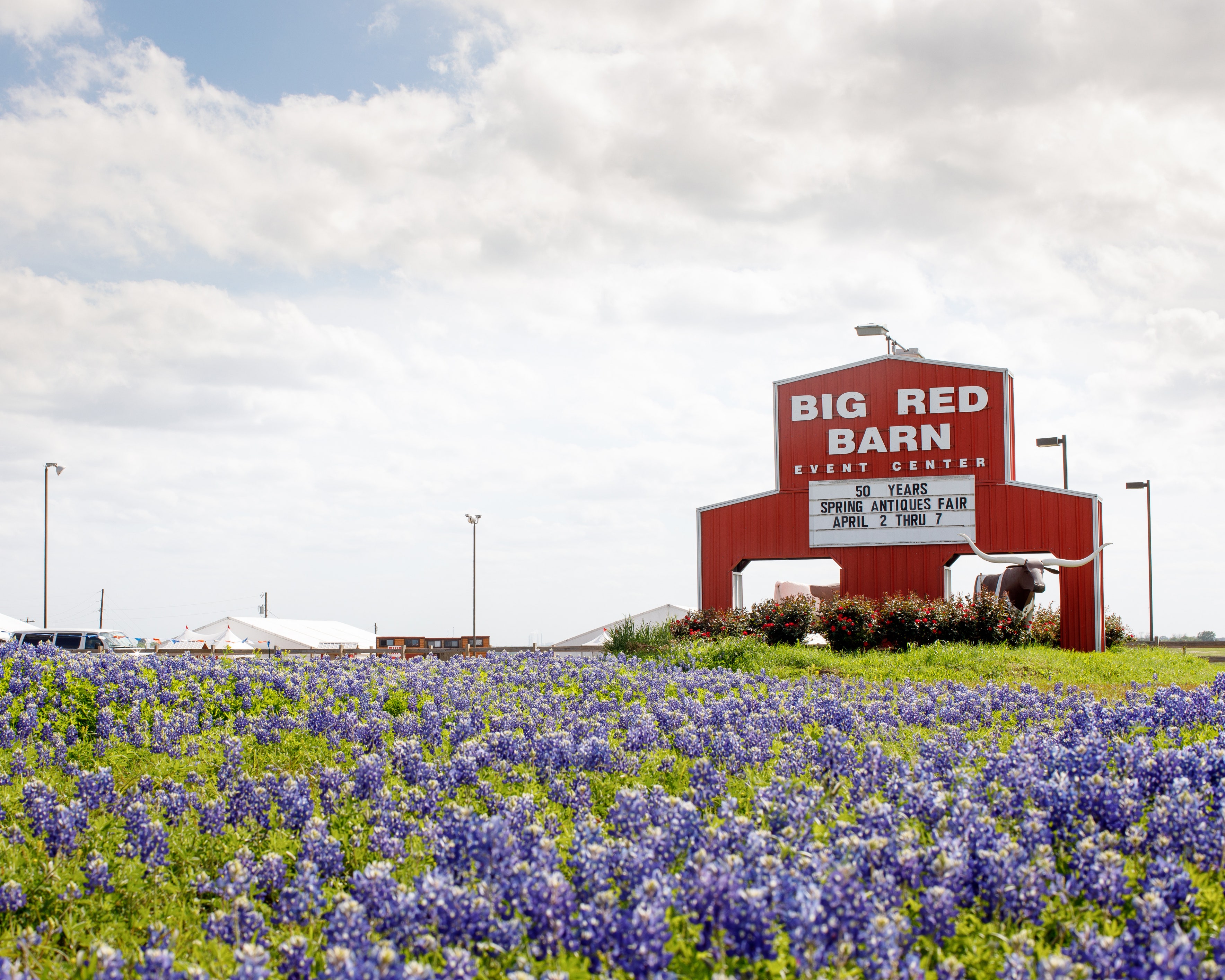 Ask any antiques aficionado where to shop for the best goods, and you’re likely to hear the name Round Top. Located halfway between Austin and Houston, the tiny Texas town, which has just 90 permanent residents, has become a pilgrimage site for antiquers, drawing thousands of visitors to its annual spring and fall events. Today, there are a number of individual fairs and shows lining a 12-mile stretch of State Highway 237. There’s the one that started it all—the Original Round Top Antiques Fair—as well as newer staples such as Marburger Farm and Market Hill, not to mention dozens of tents that fill the fields around these. This year, the landmark event celebrated its 50th anniversary, so we headed down to the Lone Star State to chat with dealers and shoppers about what makes Round Top so special.

In 1968, Texas antiques dealer Emma Lee Turney gathered a group of 26 of her industry peers and hosted the very first Round Top Antiques Fair. The show was an instant success, drawing a big-name audience that included philanthropist and Texas icon Ima Hogg. After four decades growing her show, Turney sold what then became known as the Original Round Top Antiques Fair in 2008 to Susan Franks, who had not missed an event in 30 years. “For years I told Emma Lee that if she were ever to sell the show, I would be first in line,” says Franks, whose persistence paid off.

Of the original 26 dealers, there’s just one who still sells at Round Top: Nancy Krause. “I was very young back then,” laughs Krause, now an octogenarian. “My husband and I were schoolteachers, and when he was promoted to principal, I wanted to find a new job!” The dealer, who hasn't missed a fair in 50 years, has built up quite a following. While I browsed in her booth, a couple who has been buying from her for decades dropped by to say hello. “We’ll see you in the fall!” they said as they bid her farewell—Krause won’t be retiring quite yet.

This sense of community is one of the things that sets Round Top apart: As Franks walks me through the Big Red Barn, the 30,000-square-foot air-conditioned permanent home of the Fair, she gets excited about each and every booth. “We’re like a family,” she say of her dealers, all of whom are experts in their fields. “I keep in touch with them on Facebook. I meet their children and their grandchildren.” She vets each and every dealer, ensuring that their wares are authentic and never reproductions. Once they’ve proven themselves, Franks invites them back. “I’ve known Susan since 1973 or ’74,” says Texas art specialist Cliff Logan, “but I’ve only been exhibiting for ten or 15 years.”

But it’s not just dealers that return to the fair each spring and fall. “There are customers that I have seen year after year after year,” says Franks. One such repeat guest is Liz Lambert, founder and chief creative officer of hospitality group Bunkhouse. “I’ve been going to Round Top twice a year for 20 years,” she says. “It’s a special place. In this world of homogeneity, you can find things there that you won’t see anywhere else, one-offs and unexpected gems. Over the years, I have developed solid relationships with dealers I use all of the time, and I am excited to see what they bring to the show each season.” This time, Lambert brought home a great haul for her properties: “I picked up antler light fixtures for the trailers at El Cosmico, very particular turquoise jewelry for the retail shop at Saint Cecilia, and a burled wood table for the lobby at the Phoenix Hotel.”

Designer Michelle Nussbaumer of Ceylon et Cie, a native Texan, also had a productive trip to Round Top. She visited Marburger Farm to purchase items for an auction with Chairish, which goes live on April 12. “I used to have a bumper sticker on my car that said ‘Will brake for tag sales!’” says Nussbaumer. “I love antiques and sourcing those special things that bring a home to life.” When asked for a Round Top shopping tip, she shared: “Don’t forget to photograph everything you buy and the booth it’s at so you can find your way back to pick up your larger purchases when you're done shopping!”

Of course, there are Round Top first timers, too, and they run the gamut from interior designers to all other manner of creatives. Kathy Sirvio, the color and trim design manager at Chevrolet, shops for antiques all over the world and made her first trip to Round Top this spring. “I was watching Fixer Upper with Chip and Joanna Gaines, and they go to Round Top, but you only get a five-minute snippet,” says the designer. “I just had imagined there were going to be two or three rows of tents and not much more!” But Sirvio immediately fell in love with the massive fair, spending three hours picking through Market Hill before making her way to other shows. “It would be wonderful to bring some of my design team down and let them get inspired by everything that I was able to see,” she tells AD PRO. “And then we can incorporate that back into our designs.” It wouldn’t be the first time Sirvio would pull inspiration from purchases—for the one of the interiors of the Chevy Equinox she drove here, she was inspired by a denim shirt.

As these dealers and designers attest, there’s good reason Round Top has grown to become the antiques mecca it is today, and it’s a must-visit for professionals, collectors, and hobbyists alike. We have a feeling this fair will be around for at least 50 more years.

8 Beautiful Shabby-Chic Hotels Around the World