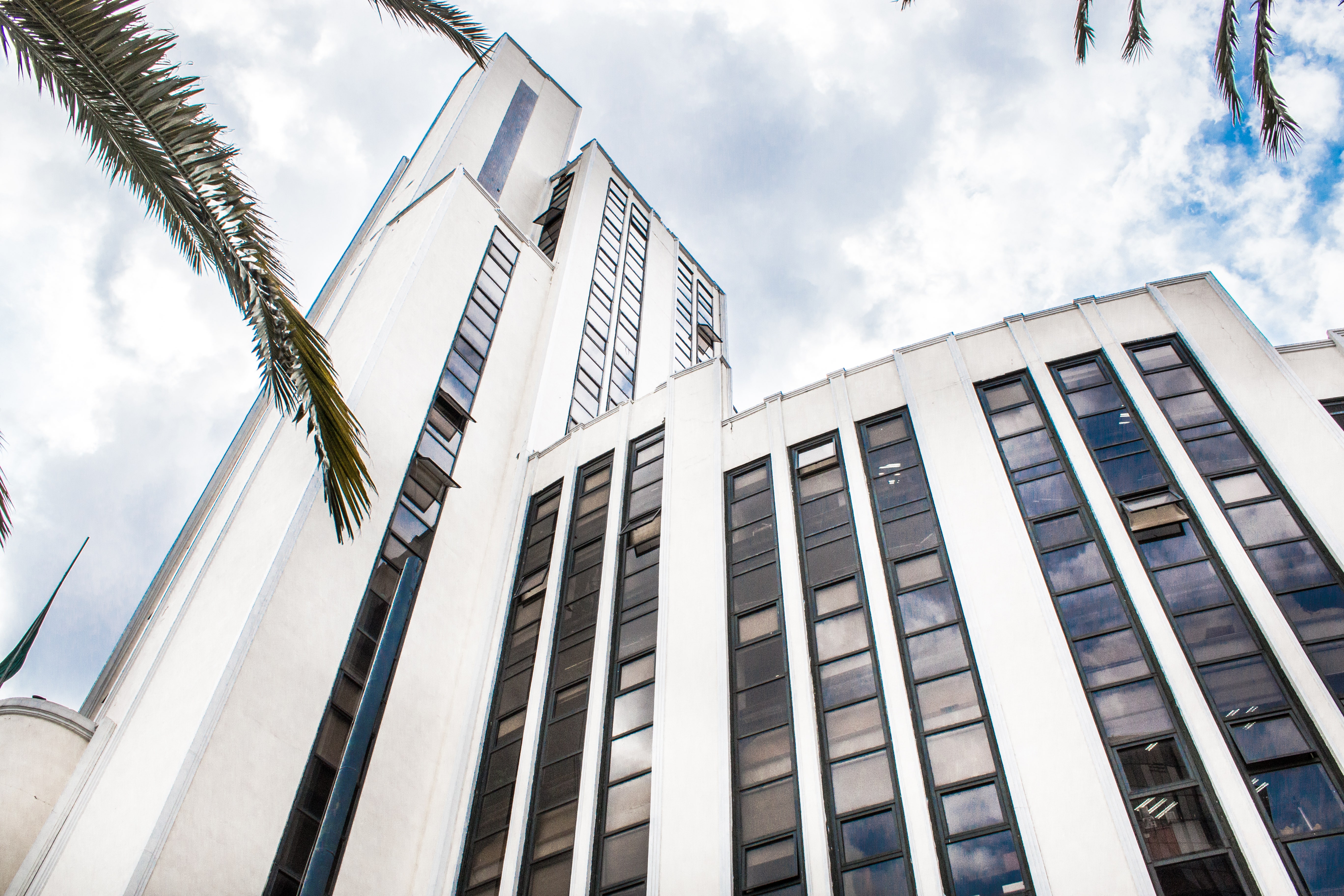 One year ago—September 19, 2017—a massive earthquake rattled Mexico City, toppling dozens of buildings and damaging thousands more. The neighborhoods of Condesa and La Roma, home to some of the most excellent examples of Art Deco architecture arguably anywhere in the world, were hit hardest. While many structures throughout the city, including historical buildings, remain damaged and vacant, two Art Deco treasures—Edificio Basurto and El Moro—are already on the road to recovery. For residents of the city of nearly nine million, the renovation of these iconic buildings symbolizes the healing process.

Many of the city’s most recognized buildings, including both of these Art Deco examples, were constructed during a golden period from the 1930s to the 1940s that drew influence from the geometric shapes, clean lines, patterns, and finely detailed finishes of the French-born movement. This moment of rebirth is a chance to return both buildings to their original glory, much of which had been chipped away by insensitive updates over the decades even before the earthquake struck. Architects and planners are scouring historic photographs and records in an effort to rebuild them.

The restoration of Edificio Basurto is well underway. Having already survived two other major earthquakes (in 1957 and 1985), the iconic structure has been saved from near demolition time and time again due to its exemplary status in the Condesa neighborhood. The 14-story, Bauhaus-influenced apartment building was constructed by architect Francisco J. Serrano between 1941 and 1944 and features a helical stairwell and stepped-back balconies. Strikingly geometric in form, it has become a hub of the Art Deco-centric oasis where it is located and a familiar landmark featured in many Mexican and international films and telenovelas.

A construction firm was already in the process of repairing some damage the building had suffered during a minor earthquake in 2012 when the 2017 quake struck. One of the most significant issues facing buildings in this and adjacent neighborhoods is that they are built atop a dry lake bed that provides unstable footing when tremors strike. Indeed, multiple buildings fell in Condesa on September 19, killing dozens of people.

“As part of the inspection after the earthquake of 2012, we found columns with insufficient resistance in different levels, including some on the first floor,” notes Efrén Franco of Grupo Colinas de Buen, the lead engineer on the reconstruction project. “We reinforced those columns, but the work wasn’t finished when the earthquake struck last September, which was devastating.”

The painstaking work of restoring the building, and in particular, the iconic stairwell, is expected to take up to two years. The opportunity to work on such a historically significant building is “a great pressure and responsibility, but also an enormous satisfaction,” says Franco. “It is the most damaged building I’ve found so far, but because it is catalogued by the Instituto Nacional de Bellas Artes (National Institute of Fine Arts,) preserving the original architecture is vital. We try at all times not to alter the architecture.”

As the project progresses, Grupo Colinas de Buen is bringing in specialists from the Instituto and other consultants to advise on the building’s Art Deco flourishes and finishes. One of the issues they face is that most of the original materials used in its construction are no longer available. So, the engineer and his team aim to reuse materials whenever possible.

“I think the most important aspect has been to make the owners understand the seriousness of the damage and from there, make proposals so that the building remains functional and the property is safeguarded,” says Franco.

“So many Art Deco buildings in Mexico were affected by the earthquake,” notes Paul Trad Kuri, CEO and founder of Arquitectos MX, the firm that is overseeing the restoration of the El Moro building, another shining example of Art Deco style in the city. “It would be a tragedy to lose these buildings.”

El Moro, sitting on Mexico City’s most prominent street Paseo de la Reforma, was one of the first Art Deco skyscrapers constructed in the nation’s capital. When it was completed in 1946, it was the tallest concrete building in the world. The 22-story building, often referred to as the Lotería Nacional because it houses the national lottery, was one of the first buildings in Mexico to include an architectural system to protect it from earthquake damage. That system helped El Moro withstand the city’s other devastating quakes including the worst in the country’s history in 1985 when more than 400 buildings collapsed, including many in the same neighborhood.

Even so, the building suffered significant damage to both the facade and the interior structure last year, Kuri reports. But this now-necessary restoration process is also a chance to turn back the clocks. Like many other architecturally-significant buildings that were renovated and “modernized” over the past few decades, the El Moro building has lost many of the distinctive interior details and finishes that made it a standout. So, to return the interior to its Art Deco magnificence, Kuri and his team are poring over primary documents to try to recreate the magic of its 1940s heyday. They have already completed a preliminary study and estimate the repairs will cost 100 million pesos (more than $5 million.) “It’s going to be very expensive, but we want to return the building to its original state,” the architect declares. “It’s very emotional because this is a very special building in Mexico, so it’s a big honor for us to be called to a challenge like this.”

The rebuilding of Edificio Basurto and El Moro are just two examples of the rebuilding process that is underway throughout the city and surrounding countryside and in neighboring states a year after the devastating earthquake. For the teams behind both projects, these are more than mere reconstructions of workplaces and homes. Their work represents nothing less than the revival of a part of the city’s architectural history—and, indeed, its cultural identity—that must not be lost.

4 Custom Furniture Companies That Will Ship to You in Under Two Weeks |...

Explore the best moving buildings via our new Pinterest board