Home News Shannon Maldonado Moved Home, Downsized, and Started Her Own Business (and It... 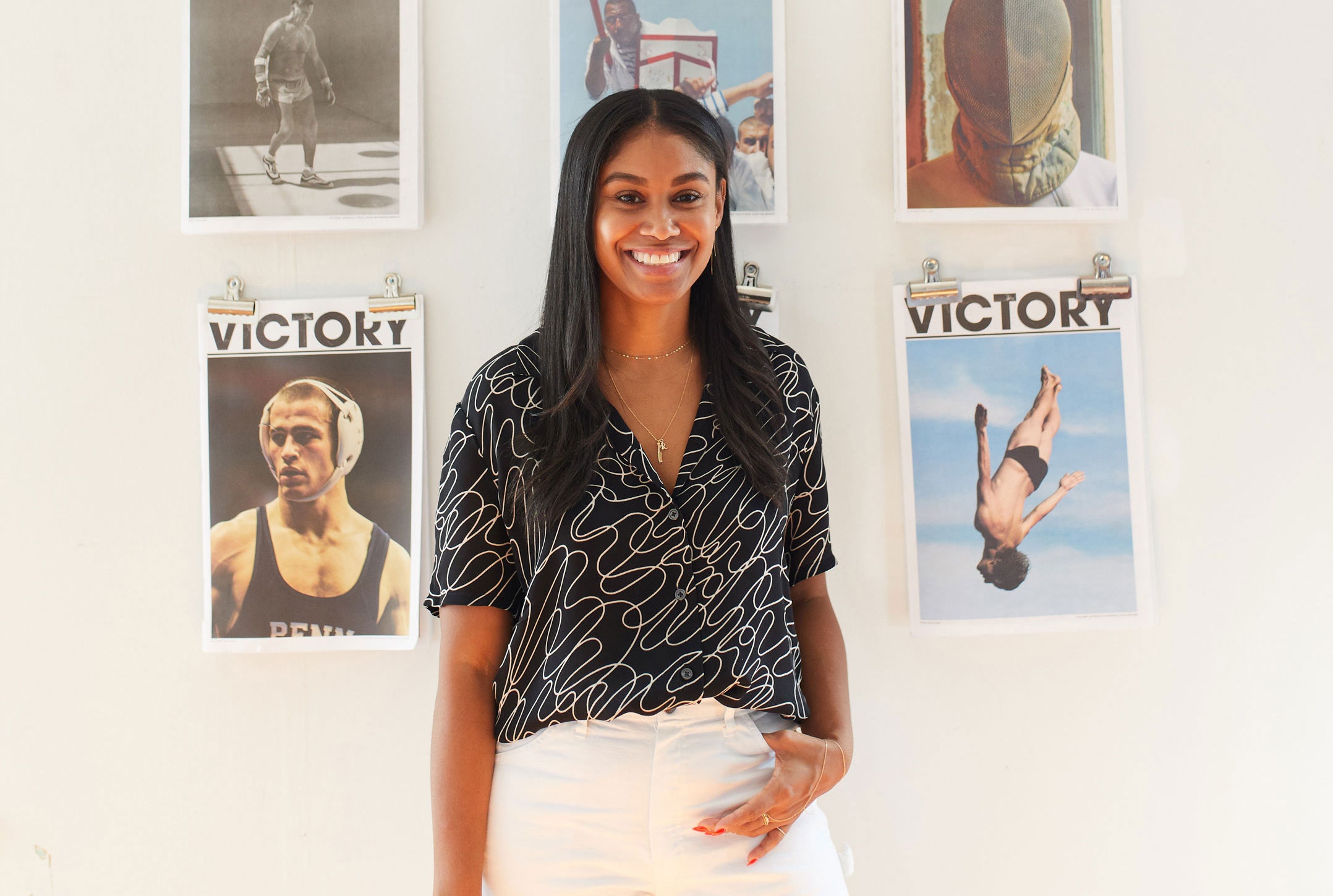 We're big fans of Yowie, a Philly-based retail shop selling everything from art to skateboard decks and ceramics, and were inspired to learn how the founder and owner, Shannon Maldonado, got it off the ground: by moving home, downsizing her living situation, and opening her own shop. Here's how a series of counterintuitive moves helped the Philly native find success, as told to Amanda Sims.

I always wanted to have some kind of space of my own—it could have been a retail store or a movie theater or something else. After fashion school, my biggest job was as a designer at American Eagle Outfitters in New York, where I worked for almost nine years. I was on a start-up team there doing a children's line. That was the seed; it was like business school for me. Then I and a few other people were moved to women's, and a lot of it was based on moving past last year's comp and updating bestsellers. Once you've done that for a few years, it becomes a formula and a bit repetitive. And I always had these other ideas about photo shoots and marketing. I felt like I wasn't fulfilled, so in 2015, I started working on Yowie as a side project. It started as a Pinterest board: What would my dream space look like? I had a million ideas on there and wasn't thinking it through too much in the beginning. Then I started reaching out to artists. Would we sell ceramics or clothing or books? I had separate Pinterest boards for raw materials, logo, and branding.

At the time, I was still living in New York, but when I really decided it was going to be a retail concept I decided it needed to be in Philly. New York just didn't seem like the right place for what I wanted to build, after talking to my friends in retail. It just felt more financially feasible to start it in Philly, and I grew up here. So I moved back in June 2016. I quit my job without a plan, just woke up a little early and decided it was the day—I saw Justin Bieber at Starbucks and was joking with my friends that it was a sign.

The funniest thing is that I think my rent was cut down 65 percent when I moved back. I left a one-bedroom apartment in Clinton Hill, a really cute place in the perfect neighborhood, but I kind of knew coming back that I couldn't downsize because Yowie was going to live in my house with me. So I got a two-bedroom, one-bath in Italian Market. I wanted to live in a very authentic South Philly neighborhood, and this is a really vibrant, crazy neighborhood—my street was in the movie Rocky. Philadelphia people in general are really prideful, South Philly even more so, and I always wanted that. Plus, my mom lives five minutes from me. I was like, OMG, my mom's going to be popping up every single day, but she's super supportive. In a pinch, I can be like, "Mom, can you run me to Home Depot to get flowers for this thing I'm doing?" And now my little brother covers the store if I have to go to trade shows.

The apartment was where everything Yowie lived. My desk was in the middle; I had all these foam core boards and mood boards of product campaigns. It was really great living with the products. I’d worked to save money in the last two years of my job, cut back on my shopping, so I didn't feel this pressure for it instantly to be a success. That was part of leaving New York, the financial pressure. My Philly apartment was a bigger place for half the price, 1,000 square feet for $1,000, an old building with a lot of character. It was really cool. I fed off the energy of living off the market.

I'd wanted to sort it out, give myself a year or two. But in the first month or so that I was back, I walked into this store, Meadowsweet Mercantile, and the owner came up and hugged me thinking I was an old friend. Afterwards I was like, I love your space, it’s beautiful! And we ended up partnering. That’s where my first pop-up was, and it was completely serendipitous because the owner had thought they recognized me. I started planning the pop-up and wanted it to be very special and different, a coming out. I had my friend Tim Gleason come up with this big, Memphis-inspired fixture: He built this crazy squiggly bookshelf monster thing for the pop-up. I didn’t want it to just be products on a table—if i was going to challenge the retail concept in Philly, I knew it couldn't be. We set it up, it looked amazing, and because I was newly coming up from being away for so long, I scoured the internet and found 150 people I didn’t know and cold-emailed them and invited them—maybe they followed this art gallery I like, or went to this restaurant and posted about it on Instagram. I messaged them, and it worked. A lot of people I reached out to showed up, a lot of people I didn’t showed up, and it was a fun, crazy night that felt, like, five minutes long. At the end of the night, I was looking at my friend Katie and my mom, and was like, I think there’s something here.

The beauty of Philly is that it’s very small, it does feel like a small town. Very quickly word started to spread and the first pop-up led to a second pop-up at a coffee shop in South Philly. Every time I finished a pop-up, I’d meet someone to plan another. After the second, our social media got a bump, and people were interested in working on what I was creating. Our biggest pop-up was with this men's shop in Center City. We did this huge installation. We rented their upstairs gallery space and set it up so that there was three separate sections of products, all color-coded: One was cobalt blue, another canary yellow, and the last one black and white. Every bit of product matched the artwork in it. I've always wanted Yowie to feel unisex, so partnering with a men's streetwear brand was great. I had this aha! moment that was like, if we can sell men ceramics we have something here. This is totally different. We need a store!

I always knew I wanted to be in this neighborhood called Fabric Row. My sister and I would go look, and this record shop was closing. I called the landlord to see the space and do a pop-up there first. Once we got inside, it was one of those funny things where you just know. But it was also a homeowner's nightmare: Everything was crumbling; I pulled on a piece of paint off the wall and a 12-foot piece came off. The walls had nothing behind them; there were newspapers stuffed behind them. So we reno'd for all of May and a month of June. We were still doing Instagram meet-up sales, which were nice because people were popping in when we were working. We’d keep the door open so the neighbors could come in and be like, "What’s this going to be?"

A pop-up is different from a full-blown retail space. Every day is not busy. There’s this ebb and flow in being there full-time, the expectation that you have after a weekend of really good sales, and then you get dropped back into reality. To take a little pressure off the store, I decided to downsize and move into a smaller apartment. I didn't need storage because I had the back of the store. My friend added me to this cute affordable-housing forum, and I moved closer to the shop, with one roommate who is a theater major. It is definitely less pressure on Yowie, but also me. When I lived in my own space, I always worried about the living room, keeping the bathroom clean—but now I just have to focus on one room. Once you start a business, it definitely feels freeing. And it felt really good to live close to the shop. I started to get very involved in civic things near the shop, seeing what buildings were being built and attending zoning meetings. Even though I lost having my own place, it gave me things that are better in the long term. And everything's temporary. Mental health is very important, and having less.

So I’m at the store almost every day, every day that we’re open. The store is only open four days a week: The first reason is that the neighborhood we’re in is very residential, so it’s very sleepy Monday through Wednesday. Also, I wanted to maintain that reality of being a pop-up, a sense of urgency like you have to catch us one of these days. We could have a really good weekend, or a really quiet weekend, and that messes with your head a bit in the beginning, you might lean on your savings or a credit card here and there, which I try not to do as much as possible. You have to have really tough skin, be your biggest cheerleader, and tell yourself it's going to work out. Now I don't shop as much, but I was shopping more in New York because I wasn't happy in my job. My purchases are more thoughtful now—I'm more excited about going out to dinner with my friends versus buying a new pair of shoes.

I left my big corporate job because I wanted to do all these creative things I’m interested in. I wanted to have the other half of my week to work on other projects and work on Yowie as a brand. The four days I’m open, it’s really fun—it flies by, so many friends pop in, and I know most customers by name. In my mind, Yowie is about building a community, and that takes time.

Chef Derrick Fox to cook up a storm in THOR Kitchen booth at KBIS...