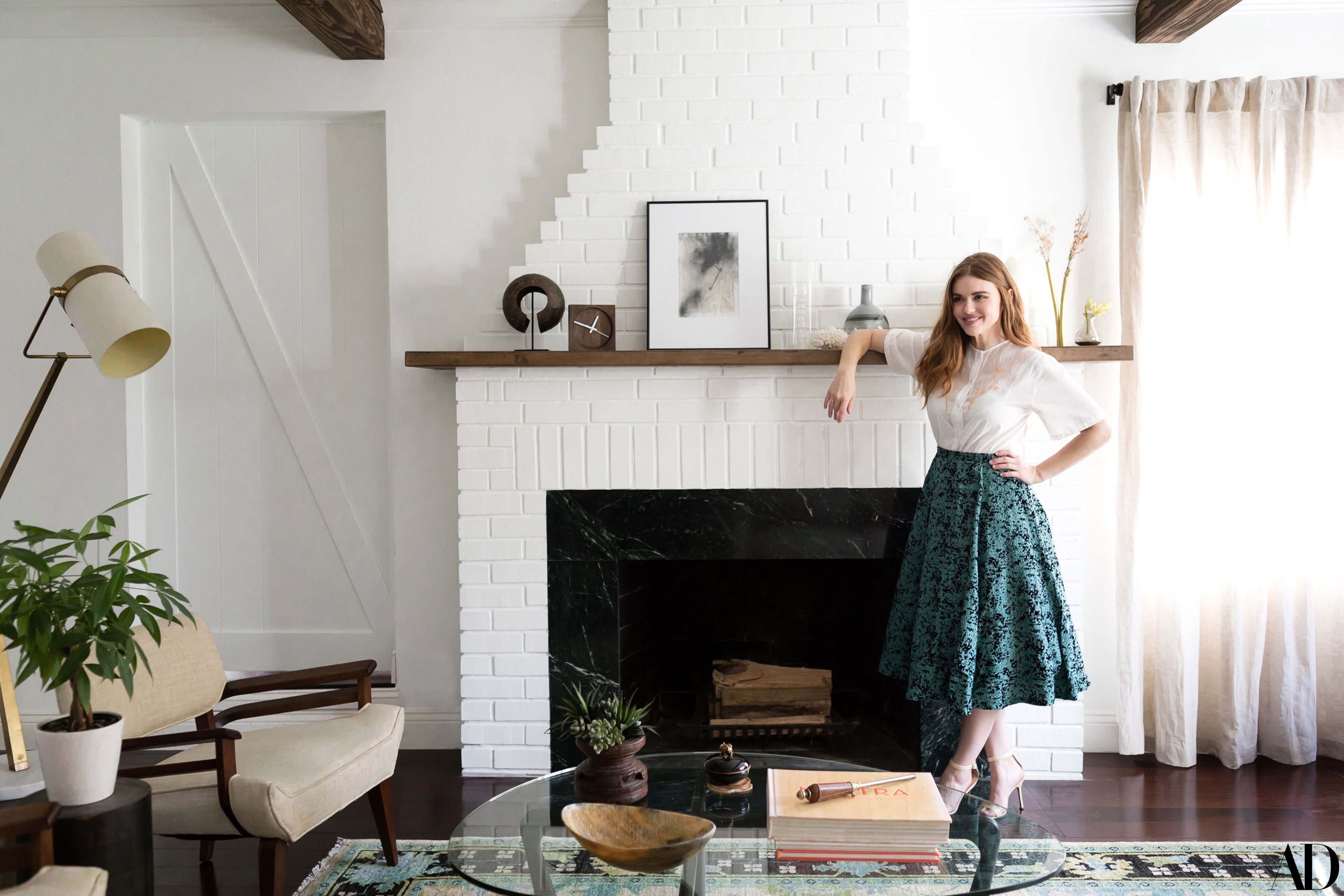 Holland Roden’s house is not like the estates of some of her entertainment industry comrades—and she knows it. It doesn’t have a view of the ocean, or immaculately hand-painted wallpaper, or carefully collected antiques. In fact, she says, “it’s like a little kid’s house. It’s not overly perfect.” And while the house beside her own 1923 Spanish Colonial Revival once belonged to Judy Garland, hers was previously owned by Frank Avruch—the 1960s entertainer best known as Bozo the Clown. “Of course," she says with a laugh, "I get Bozo the Clown, and my beautiful neighbor next to me gets Judy Garland’s house.”

Dubious Hollywood pedigree aside, Roden’s home is not actually like a child’s—unless that child knew exactly what they liked, could handle a major renovation practically on her own, and had a preternatural eye for mixing original colors and textures (yellow grout on white kitchen tile with evergreen cabinets, for example). Oh, and responsibly considers factors like resale value before messing with her walls.

This is the first home purchase for the 31-year-old actress—who is best known as the star of Teen Wolf—and she bought it sight unseen. “I was working in Canada at the time. Welcome to an actor that doesn’t have an assistant; you just have to trust,” says Roden, whose agent had put in two other offers on her behalf. Roden engaged in a bidding war (“hand-to-hand combat”) for her first choice, but eventually lost to another bidder the actress cheekily refers to as "Daddy Warbucks," as he put in an all-cash offer to purchase the property for his daughter.

Her current home, a three-bedroom with a guest house, ticked many of her boxes, including size and style. “I like to lean into wherever I am in the world,” she says, adding that while she’d love a Craftsman in Pasadena, she didn’t want to commute. She also saw the Italian marble and kitchen butcher block and thought, “I can work with that.”

In the fall of 2017, Roden embarked on what she thought would be a small renovation, led by a “godsend” of an electrician, John Manzano. It quickly became clear that it was a much bigger job than she had anticipated. But even as she lived at the house for half of that time and worked in New Zealand during the rest , four months' worth of work was completed in six weeks. Together Manzano and Roden designed the fireplace, relying on the Diptic photo collage app, and added crown molding, shiplap, beams, and barn doors she sourced from Home Depot. The whole thing was endlessly stressful, but “it was actually a really fun experience,” says Roden. “John taught me a lot about the process, which I’m not sure contractors would do with their clients on a regular basis.”

"Books are a big part of how I decorate and use color in my house," says Roden. "I like finding smaller publishers that make interesting books on anything, like Icelandic bodybuilding."

A fanatic for catalogs, Roden says she’ll read every page of a gate catalog or even a Pottery Barn Kids catalog if it’s sent to her house: “I have that compulsion," she explains. “My gossip magazine is an interior design catalog.” An avid reader, she calls The Fountainhead one of her favorite books because of its architecture theme. The self-described quasi-minimalist also believes strongly in coffee-table books, which she collects. “I always think flowers, candles, and coffee-table books—no one can ever have too many of those things.” Roden tours homes everywhere she travels. “I love to walk through history that way, through the eyes of a family that lived there.”

“It’s sort of the no-makeup makeup look where it’s in the details,” says Roden of her ethos on tightly curating the little things. She painstakingly pored over shiplap texture, for example, and crown molding. “The details make an impression on the house, how pristine or prestigious it looks. I wanted a more laid-back rustic feel, with pops of gold metallic.” The actress designed her living room around two Alexander McQueen needlepoint pillows. They were an investment she made five years ago when she couldn’t afford the rug version. “I literally sweat for days because I bought them, but I love them. I believe in ‘Use the china every day.’ My dog lies all over these things, but I’m obsessed with them.” Pops of blue and golden yellow weave throughout the bright room where, she says, “I eat, sleep, and breathe.”

The actress, who was recently featured on the television series Channel Zero, also began collecting art two years ago after a “life transition,” purchased with the help of art collector Andrea Guttag. Besides her Alexander McQueen needlepoint pillows—which Roden bought five years ago before she even owned a couch—her art collection is her most valued possession. It was an intimidating affair, she recalls. “I have this joke: I say I got into the acting business 10 years ago and thought, 'Okay, nothing is more pretentious than film and TV.' Then you get a show for a few years and you go to Fashion Week and you’re like, 'Oh my God, nothing could be more pretentious than Fashion Week!' Then you start looking to buy your first home or decorate your first proper apartment and you enter the last phase: 'Nothing could be more pretentious than the art industry!'”

The process of acquiring one of her favorite pieces was an education. She decided she wanted a Brian Bress video installation within three minutes of seeing it at the now-defunct Los Angeles gallery Cherry and Martin. “But that's if you’re allowed to have it,” she says, laughing. Guttag did her thing. “I don’t know how much pushing and pulling and arm-twisting there was—I plead the Fifth,” she says of the vibrant, arresting piece that now hangs in her living room. “It’s like finding out you get an acting job. You’re not quite sure what algorithm got you the job, but it’s a ‘yes,’ and you don’t ask any questions.”

Scandinavian Modernism Is Beautiful, Elegant, and Everywhere—Is That a Good Thing?

11 Toolbox Designs That Are Actually Cute, Because Everyone Needs One