Home News The 20 Best Destinations for Stargazing Around the World 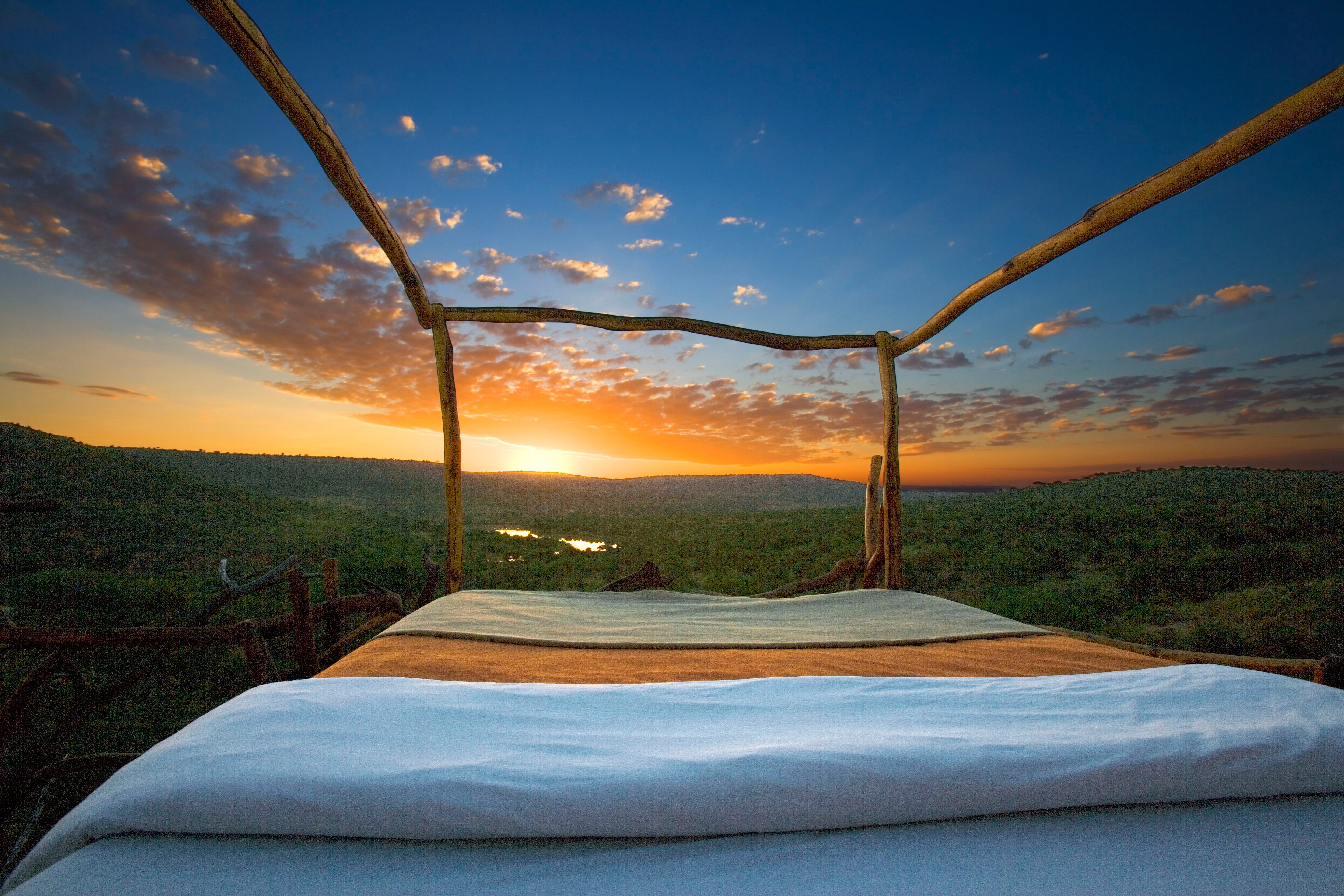 “For my part I know nothing with any certainty, but that the sight of the stars makes me dream,” wrote Vincent van Gogh. The artist may not have been talking about slumber, exactly, but stargazing has been a beloved pursuit of human beings since the beginning of time. While not soporific itself, the sight of stars aglow, the full moon hanging like ripe fruit in the sky, and the possibilities of the universe, have brought contentment and repose to generations. To be lost in the night sky’s largesse is to be connected to the world at large. Suddenly, beneath a sky aglitter, trouble and strife dissipate. Succumb to that feeling (or just enjoy a good search for a shooting star) at these star-focused accommodations around the world. ​Herewith, AD's list of the 20 best storybook sleeps—from St. Lucia to Australia and beyond—that await your visit.

Owner-architect Nick Troubetzkoy calls the suites he designed for his abstract resort on St. Lucia’s southwestern coast “sanctuaries.” Commodious, with personal interior swimming pools, and views of the island nation’s iconic Pitons, they fit that name. But these rooms, configured with one wall open to frame the view, might also be termed “star sanctums” for the way they embrace the night sky. jademountain.com

Pumpkin-colored hoodoos, saffron boulders, and lacelike slot canyons compose the desert terrain that surrounds Amangiri, near Lake Powell. Designed to meld into the landscape, Amangiri can barely be spotted from a distance. It seems to disappear—just like an oasis. After a day challenging yourself on the resort’s famous via ferratas, bring your heart rate down as you dream on your private sky terrace. Atop the roof of the Mesa and Desert Pool Suites, this outdoor bed gets better with Champagne and s’mores. aman.com

If you can’t climb a tree—sleep among some. Spend the night at Inkaterra's Canopy Treehouse, built on a platform 73 feet above the Peruvian Amazon. Remotely situated and rustic, but luxuriously appointed, this cabana comes with staff, ensconced below—and a ground level escape hut for those with second thoughts. After your chef serves dinner, sit back to gander at the sky’s spectacle. In the morning, prepare to enjoy the resort’s many amenities. inkaterra.com

Forest bathing doesn’t have to be done in daylight. The night can soothe your soul, too. Rie Azuma designed Hoshinoya Fuji to blur the boundaries between indoors and outdoors any time of the day. Facing Mt. Fuji and Lake Kawaguchi, elongated, sleek, cabins point toward the vista like spyglasses to capture the view. Enjoy location-appropriate activities, such as woodcutting and canoeing, by day, then retreat to your deck after dark for the ultimate star shower. hoshinoya.com

Far from the buzz of Waikiki, on Oahu’s less trammelled western side, Four Seasons Oahu Ko Olina revels in its location, long considered sacred to Hawaiian royalty. An expansive property, which sits beside Lanikuhonua, a beachside cultural treasure, the resort deeply embraces the Hawaiian spirit. Give your children the opportunity to hear Hawaiians discuss the role astronomy plays in their culture at an on-property overnight, beneath the stars. Four Seasons’ premium beds, memories, and star power go without saying. fourseasons.com

Sleep tight in Rajasthan, India’s most colorful state. On a Classic Journeys India Culture and Walking Tour, day five takes you to Pushkar, a holy pilgrimage site, and home to 400 sky-blue temples and more than 50 bathing ghats. To the background sounds of chanting, camp out amidst a field of roses in a luxury tent, complete with private bath and pool. An alfresco dinner competes with the starry skies. classicjourneys.com

At Soneva Jani in the Maldives' Noonu Atoll, star buffs have the opportunity to see constellations in both the Northern and Southern hemispheres. The resort has taken advantage of its unique geographical position, far from light pollution. Over-water bungalows have been designed with retractable roofs. Lie together in the master bedroom, entranced by the night sky. Don’t worry: At the first sign of rain, the roof automatically slides shut. Enjoy, too, the resort’s James Bond–inspired observatory, where a 16-inch Meade telescope and 3D technology elucidate the secrets of the sky. soneva.com

For oenophiles, sleeping in a vineyard ranks as a dream. Take that romantic experience up a notch at Entre Cielos, a Small Luxury Hotel, set in Argentina’s Mendoza region. It offers the Vineyard Loft, which stands on stilts above the vines. Glass walls usher in the terroir, a window in the ceiling displays a panorama of stars, and an outdoor bathtub soothes at day’s end. When not dropping your jaw over astronomical sights, avail yourself of the hotel’s own three wine labels and a spa with a wine bath. entrecielos.com

Back in the day, people unfurled a blanket on the lawn and gathered beneath the stars on summer nights to watch the night sky come alive. That’s the vibe at Cresto Ranch, where Dunton River Camp holds eight luxurious canvas tents, wedged amid pines in the Colorado Rockies. Ideal for canoodling beneath the stars, the tents take the place of that blanket of yore, their door drawing in the moonlight. Spend your days dipping into the resort’s healing hot springs. duntonrivercamp.com

Further-flung South Australia’s Eyre Peninsula has miles of wild stretches. Anchor yourself in Gawler Ranges National Park, a melange of gullies and gorges. Celebrated for its geology and wildlife, this area defines solace and quietude. Experience nature’s architecture at Kangaluna Camp, where a “swagon” awaits. This renovated wagon with a swag (that’s Australian for canvas bedroll) bed means you sleep staring at the stars. The eight-inch computer-controlled telescope at the camp magnifies planets, making them seem close enough to touch. gawlerrangessafaris.com

You can have your suite and star power, too. Ten stories above Rodeo Drive, the Veranda Suite occupies its own floor. But don’t linger amid the gorgeous interiors. Head straight to its terrace, where a 16-by-10-foot tent, kitted out with such marks of civility as a crystal chandelier and fur rugs, proves the comforts of urbane camping. As you talk stars and planets, nibble on celebrity chef Chris Ford’s reimagined s’mores, with 24-karat gold leaf, Valrhona chocolate, and Tahitian vanilla marshmallows. fourseasons.com

They call the region Vik Chile in Chile’s Millahue Valley the “place of gold,” but the treasure trove only increases at night when the stars come out. Designed by Alexander and Carrie Vik in association with architect Marcelo Daglio, the 11-suite property perches on a hilltop, with arching views of the vineyards. At night, floor-to-ceiling windows reveal a peerless moonlit spectacle. During daylight, enjoy wine tasting, hiking, and lolling about in the spa. vikchile.com

"The roof of Europe." That’s the nickname for Val Thorens, in the French Alps, a reference to the ski resort’s über-high elevation. For galaxy aficionados, that soaring altitude translates to star-studded skies. Stay at Small Luxury Hotels' Hotel Le Pashmina, an intimate stronghold, wedged amid Les Trois Vallées, a region renowned for its plethora of ski slopes. Rather than the chaletlike rooms, choose the igloo pod, dotted with outer-space-pointing windows. www.slh.com/pashmina

You’ll feel as if you’re floating through the air in a bubble—like a cartoon character. At Campera Hotel Burbuja, an eco-conscious retreat in Baja California, views of the Guadalupe Valley, and its plentiful vineyards and wineries, define the stay. Like intimate stadium seats, French-designed bubble rooms with transparent walls present the evening’s performance—an enlivened night sky. At the Bubble Hotel (English translation), you’ll find regionally made soaps and a minibar stocked with local wine. camperahotel.com

In the African bush, dusty, safari afternoons end with a sundowner, as participants toast the dusk and marvel over what they’ve encountered on their game drive. While you tipple with friends, staff at Elewana Collection’s Loisaba Star Beds get busy. They drape mosquito netting over your elevated bed, then drag it out to your porch, which hovers over the valley. All that’s left is for you to clamber up, snuggle in, and study the stars. You’ll snooze to nature’s lullaby, which may include a hippo’s bray. elewanacollection.com

Lanterns, candles, and your passion will be all the illumination you need to see the stars from Dolphin Island’s Hill Top Sleep Out Bure. On a 14-acre private island, surrounded by the gin-clear Bligh Waters (ideal for divers), off the tip of Viti Leva, this Pacific paradise couldn’t be more romantic. With just four two-person suites, the resort ensures quiet time alone. This thatched, open-air bure, at the island’s top elevation, takes stargazing to new heights. dolphinislandfiji.com

Where fairies might live, the tiny eco-houses, tree suites, and cottage, designed by Luis Rebelo de Andrade, lie scattered around verdant parkland in lesser=traveled northern Portugal. Made from slate and wood, they fuse into the leafy landscape, each vaunting a room specifically designed to showcase the stars. While on the property, don’t miss some time in the Thermal Spa, designed by Pritzker Prize winner Alvaro Siza Vieira, who modernized the original,19th-century spa structure’s interiors, honoring its bones. designhotels.com

It’s not as if Colorado doesn’t have camping territory in abundance. But mountain people, even the urban ones, love their alfresco shut-eye. At Le Méridien's 54thirty Rooftop Experience, in partnership with OutdoorsGeek, the tony hotel goes outside, and up to the roof, poised at 5,430 feet above sea level. Snooze with a romantic campfire, custom Pendleton blankets, and a Reflector Telescope as part of the deal. With that bottle of Dom Pérignon, you won’t just glimpse stars—you will “taste” them.

At Chewton Glen, a Relais & Châteaux country hotel in Hampshire, on the verge of the storied New Forest, you’ll find more than 130 acres of verdant grounds. Night watchers, however, can perch comfortably above them in one of the hotel’s unique Treehouse Suites, which feature huge windows to frame the starlight. Expect delivered picnic baskets with foraged honey, special Treehouse spa treatments, and a children’s nook filled with storybooks. Test out the newest, largest, and more sequestered accommodation: the Yews. chewtonglen.com

Everything’s bigger in Texas, including the sky. The stars shine brightest at La Cantera Resort & Spa, roosting on a hill at the Alamo City’s highest point. While the resort’s villas have ample porches for indolent pursuits, the best seat in the house is spa Loma de Vida’s stand-alone Sky Loft. Here, infinity above looks like the shimmery work of a child with a glitter gun. Designed by Blu Spas Inc to suggest a tree house, these stellar, intimate spaces feel otherworldly. destinationhotels.com

RELATED: The 8 Best Destinations for the Solo Traveler