Home Modern Architecture The Nation’s #1 Holiday Party, the MATZOBALL, is back and better than… 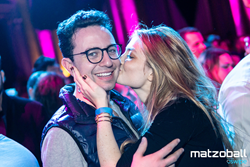 Anyone who has ever attended MATZOBALL knows how incredible this party is, those who haven’t yet are truly missing out, explains Andrew Rudnick, from Mazel Events, LLC and founder of the MATZOBALL.

This year will mark the 33rd year that Jewish singles and their friends come together in one place for what is considered the nation’s #1 holiday party, the MATZOBALL. The MATZOBALL will be held in select cities around the country, making it the event of the year. This year, they have partnered with the organization Gift of Life Marrow Registry, providing attendees with the chance to save a life this Hanukkah. This is a fun annual bash that singles will not want to miss out on. Whether meeting up for a fun-filled night, or finding someone that turns out to be their soul mate, MATZOBALL has a long reputation of bringing Jewish singles together.

“Anyone who has ever attended MATZOBALL knows how incredible this party is, those who haven’t yet are truly missing out,” explains Andrew Rudnick, from Mazel Events, LLC and founder of the MATZOBALL. “Make this the year that you attend MATZOBALL. Once you do, you will never want to miss it again, it’s that much fun!”

According to the US Census Bureau, roughly 45% of the US adult population is single, which is more than any other time in history. Despite there being so many singles around the nation, many people find it difficult to meet those who have similar interests or background. Attending MATZOBALL is a great way for Jewish singles to meet others. It provides a fun and stress free atmosphere, which could be the start of a long lasting relationship.

Rudnick started the MATZOBALL tradition in 1987, when he convinced a bar owner to keep the place open so that he and some friends could have a gathering on Christmas Eve. That night, he met his future wife, loved seeing how much fun everyone had, and decided to make it a yearly tradition. Since that time, there have been over 400,000 people who have attended the yearly bash.

Since its founding, MATZOBALL has grown significantly. While the majority of those who attend it are Jewish, increasingly there has been others who are not who attend each year. Singles from all backgrounds and ethnicities are taking part in the annual tradition. This year, attendees will have a chance to save a life when they attend the event.

By partnering with Gift of Life Marrow Registry, MATZOBALL is giving people the option to help those who have blood cancer. The organization will have a table set up at the events and those who would like to be potential lifesavers can easily join the marrow registry with a simple cheek swab. At some point, they may be contacted regarding being a match for someone who needs a blood stem cell or marrow transplant.

“Gift of Life Marrow Registry is incredibly excited to be partnering with the Matzoball to save lives this Hanukkah,” said Gift of Life Jewish Community Engagement Coordinator Valerie Janovic. “On this holiday of miracles and gift-giving, you can be someone's miracle and give the gift of life. This Hanukkah, instead of ‘Chag Sameach,’ wish your friends and family a ‘Swab Sameach’ to raise awareness that finding a match and a cure begins with one remarkable person and one life-changing swab.”

MATZOBALL will be powered by JSwipe again this year. Their app, which has over 1 million users, makes it easy to swipe left or right on nearby Jewish singles. The app can be downloaded on iOS and Android devices. Their mission is to bring Jewish singles together and create meaningful relationships.

In addition to general admission tickets, many venues offer upgrades, including a fast pass to move you to the front of the admission line. Some parties are also offering group table packages, which include multiple tickets for admission, alcohol, VIP lines, and more. For complete city information, ticket options and pricing, to purchase tickets, or to join the VIP list, visit the website at: https://matzoball.org.

About MATZOBALL
MATZOBALL is a yearly huge party for Jewish singles that is held every December 24th. Since the first official event of its kind in 1987, the event has been held in select cities around the nation. There have been over 400,000 people attending and it has generated over $15 million in revenue. MATZOBALL was founded by Andrew Rudnick, owner of Mazel Events, LLC. The yearly party is powered by JSwipe, the #1 Jewish dating app in the world, with users in 70 countries. To learn more about MATZOBALL, visit the site: https://matzoball.org.

Masterpiece London Has a New Strategy to Seduce Visitors