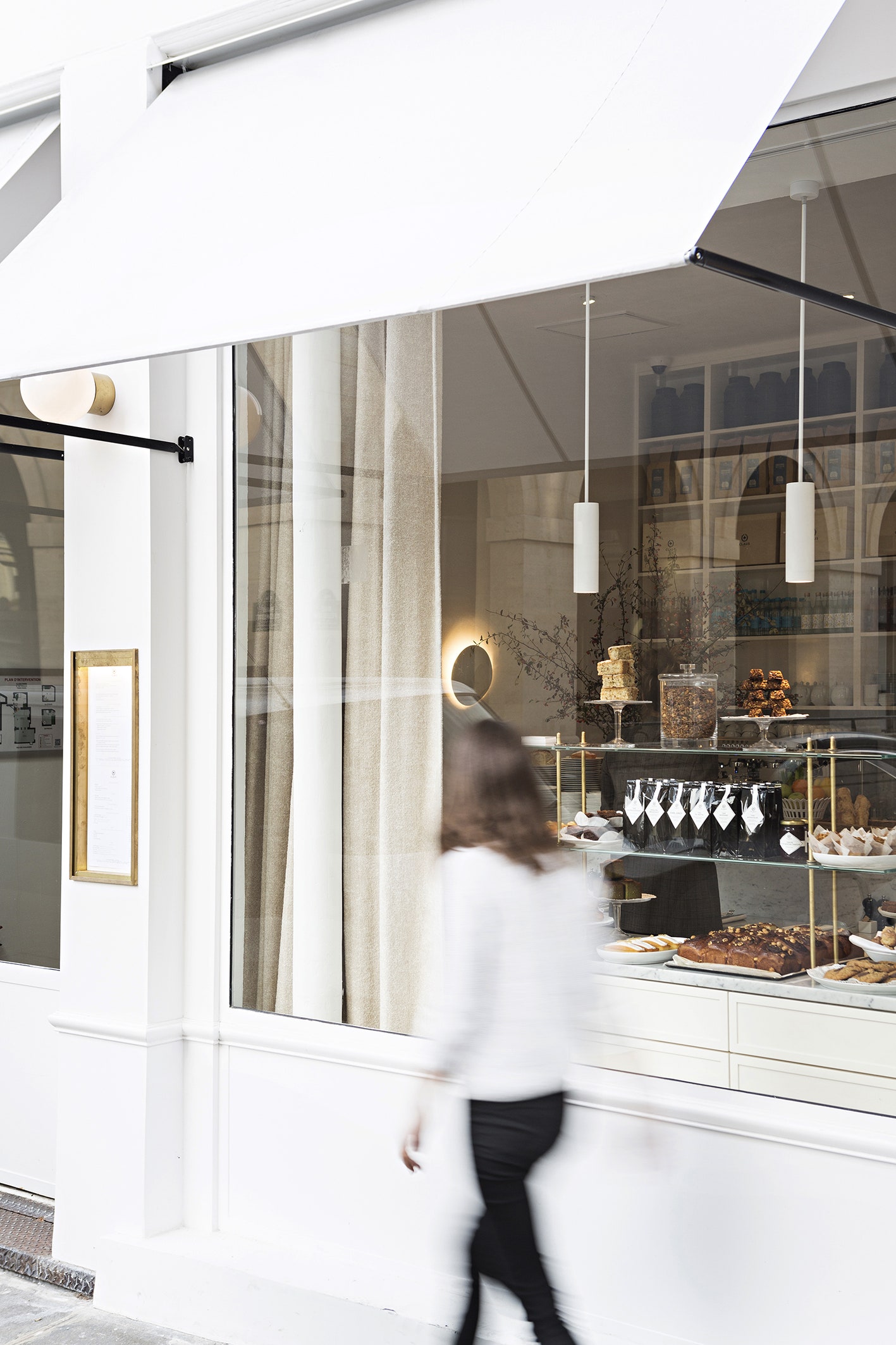 With spring upon us in the Northern Hemisphere, it’s time for another look at the newest, under-the-radar spots frequented by Paris's chicest residents.

With two addresses already on the Right Bank, it was time for German-born chef Claus Estermann to open one of his eponymous outposts on the Left Bank. Located in the heart of Saint Germain des Près, in the Sixth Arrondissement, Estermann debuted last fall his all-day establishment, where breakfast is always the star of the show. A cheerful and light-filled interior, designed by architect Fabrizio Casiraghi, delights visitors with hints of Josef Hoffmann and a Viennese café. Go for the Bavarian pfannkuchen or rosti and take home the Claus trademark homemade jams and muesli. clausparis.com

Inaugurated at the same time as the ambitious contemporary art foundation Lafayette Anticipations this spring, A Rebours, the shop, is starting to make waves in its own right. Tucked away behind the foundation with direct access, the shop is conceived as a laboratory for fashion, lifestyle, rare books, art, and design. It's worth the visit for its one-of-a-kind objects, artist-designed products, and a curated selection of tomes, not to mention innovative displays and some of the most beautiful flower arrangements in all of Paris. @areboursparis

It all started with a Franco-Japanese love story, and now Evidens de Beauté is celebrating its 10th anniversary. The skincare brand has just opened its first French spa in the tony 16th Arrondissement. Barely noticeable from the street, the front door opens into a world of calm and luxury created using an all-white-and-beige palette. The young interior designer Emmanuelle Simon infused the space with aged oak, polished cement walls, and touches of raku pottery and brass. “I wanted to create a level of comfort and intimacy for the clients and shelves like trays to present the products,” Simon tells AD. Mission accomplished. evidensdebeaute.com

One of the most charming covered passages in Paris, the Galerie Véro-Dodat, is now home to the first store from lifestyle brand Ligne Blanche Paris. Founded in 2007, it carries products ranging from scented candles to tableware and fine table linens. Perfect for the art lover, too, as Ligne Blanche Paris features exclusive posthumous collaborations with the estates of Andy Warhol and Keith Haring, and the creative duo Gilbert & George. Eat off of plates with designs by Jean-Michel Basquiat and drink your coffee out of a Magritte mug. ligneblancheparis.com

When the "2017 World’s Best Restaurant Pastry Chef" (as voted by Les Grandes Tables du Monde), Cédric Grolet, opened his first ever pâtisserie, the lines started forming. Located in the bustling First Arrondissement, just around the corner from Le Meurice Hotel, where he presides, the tiny store has caused a sensation. His motto is to keep it simple and find inspiration in nature. Probably most well known for both his fruit sculptures and his distinctive take on such French classics as the old-fashioned éclair. AD took a sneak peek one morning before the doors opened and there was already a line forming down the block. dorchestercollection.com

The American designer who opened the tiny Boot Café, Phil Euell, has just opened a small restaurant, CAM, near the Pompidou Museum, in the Third Arrondissement. Euell says, “I had this idea two years ago and just took my time—the idea was natural wine and Asian food. Keep it simple, just wine, beer, and water. No coffee. No dessert.” The formula must be working: Open only for dinner and closed Tuesdays and Wednesdays, the place is always buzzing. Euell adds, “Alain Ducasse was here last week. Lots of chefs come here for Esu Lee, our chef.” The menu, largely Asian-fusion, changes frequently and features dishes like burned garlic mackerel, drunken clams, and angry quail. (If you’re not in Paris anytime soon, try to catch their two-day pop-up at Good Luck Bar in L.A. this spring.) When asked what the name of his restaurant means, Euell smiles and says, “I have no idea—that was the name on the front when I got here—it used to sell tourist things like little Eiffel Towers." www.timeout.fr