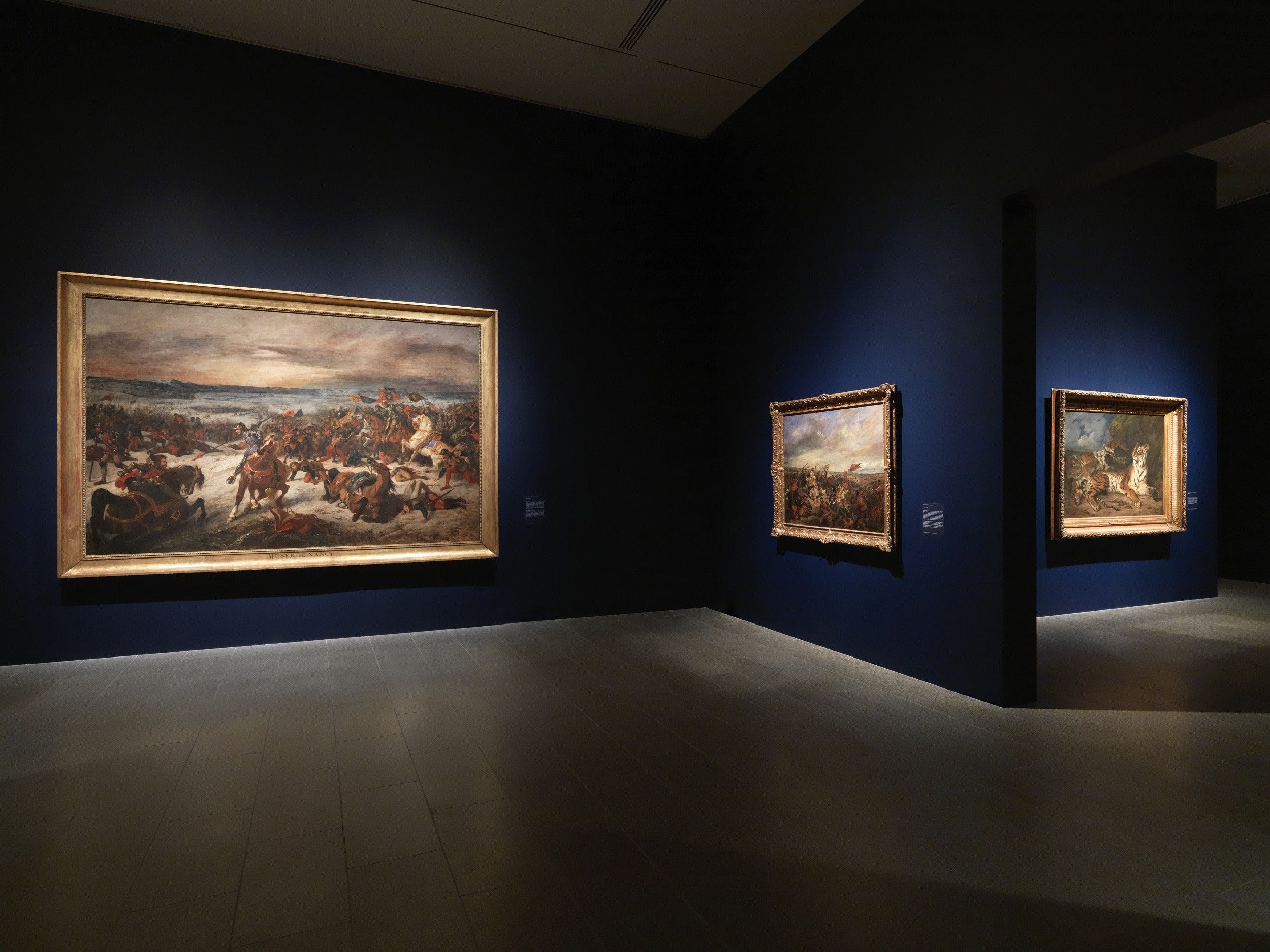 This past spring, the Musée du Louvre in Paris experienced an attendance bump unlike any other. Not only did the iconic institution serve as the backdrop for a music video by luminaries Beyoncé and Jay-Z, prompting throngs of fans who might not otherwise visit to make a pilgrimage, but the French museum also set a momentous new record: Nearly 540,000 visitors poured into the Hall Napoléon to take in the Eugene Delacroix retrospective, appropriately titled "Delacroix," making it the busiest show in the storied museum's history. Now, following its unprecedented success in the French capital, the highly anticipated exhibition has come Stateside for its run at the Metropolitan Museum of Art in New York.

The opening of the exhibition on September 17 marks a historic occasion for the New York museum, as this is the first full-scale career retrospective of Eugene Delacroix's work ever to be shown in North America. Though the artist's name is well-known, the show offers a complete, more complex understanding of the Romantic painter, and a chance to discover his work through the eyes of his contemporaries. The exhibition is a collaborative effort between the Louvre and the Met, four years in the making, which serves to strengthen the 20-plus-year partnership between two of the world's greatest encyclopedic museums. The show's Stateside iteration brings together, in total, more than 150 works from the collection of The Met and some 60 international lenders, borrowed from museums all around the world. From the Louvre alone come 17 paintings, including masterpieces such as Women of Algiers in Their Apartment (1834), which has influenced countless of artists in its wake. Sebastian Allard, co-curator of the show and director of the department of paintings at the Louvre, noted that the French museum lent everything it could, considering the size and condition of the works, though there are some tableaus that were too large in size and too ingrained in the tradition of the Louvre (the famous Liberty Leading the People is one) to make it to New York. On the flip side, there are many works in the show that have never before been lent out from the Louvre, marking the first time they've been exhibited outside of Paris.

"This exhibition does not mark an anniversary," remarked the show's co-curator Asher Miller, associate curator in the Met's department of European paintings. "This show hasn't been done in Paris since 1963, and never done here. And when approached by the prospect of this collaboration, there really wasn't a need for justification beyond the obvious. Yes—a serious, focused exhibition about a great artist. It's as simple as that," said Miller. "If not now, then when? And if not, then what are we here for?"

Delacroix's work is easily recognizable, though seldom fully understood. He is lauded as not only one of the best French painters of his era, but as one of the greatest artists of all time. Born in 1789, toward the end of the French Revolution, Delacroix came of age during the downfall of Napoleon. Driven by his pursuit of novelty and freedom, he became synonymous with the Romantic period. He was self-reflective and articulate—largely in his writing, once proclaiming that “if by Romanticism one means the free manifestation of my personal impressions, my aversion to the models copied in the schools, and my loathing for academic formulas, I must confess that not only am I Romantic, but I was so at the age of 15.”

The exhibition is organized chronologically, beginning with the world's discovery of the artist as he experimented with a variety of mediums in his quest to achieve fame. His focus on portraiture is on display, though he seldom painted himself, opting instead to express himself and his sensitivity through his writing. His thoughts on painting as vehicle between the artist and the viewer are evidenced in his journal entry: "When I have done a fine painting, I have not expressed any thoughts. That’s what they say. How simpleminded they are! . . . A writer says almost every­thing in order to be understood; painting builds a kind of mysterious bridge between the soul of the characters and that of the spectator.” While Delacroix's work is well read across France, the Met's show serves as an introduction to his writing to the American institution and its visitors.

As a painter his subjects varied; he depicted a wild range of people, animals, landscapes, and nature, though the commonality rooted in all of his work is a study of the human condition. Most famously, his 1830 work titled Young Tiger Playing with Its Mother (Study of Two Tigers) demonstrates his talent for portraying animals with the same attention and emotion that he applied to human subjects. Once critic even noted that “this unusual artist has never painted a man who looks like a man in the way his tiger looks like a tiger."

Delacroix's work is energetic and chaotic—his brushstrokes are furious, sometimes even tumultuous. Among the scores of dark, bloody battle scenes he painted, he also rendered bouquets of flowers with bright, delicate beauty. There's a deep sensitivity to his work that is best conveyed by Charles Baudelaire, who wrote that "Delacroix was a volcanic crater, artistically concealed beneath a bouquet of flowers." His contributions to art history, coupled with his deep respect for tradition that fueled his creative expressive, cannot be understated. His willingness to experiment in his art, while studying the work of artists that came before him, is largely responsible for what we consider to be modern today. Needless to say, he is often cited as a chief inspiration among throngs of artists. As Cézanne once so eloquently put it, "You can find us all in Delacroix."

"Delacroix" is on view at the Metropolitan Museum of Art through January 6, 2019.

The Menkiti Group Breaks Ground on Historic Project in Anacostia