Home News The World Trade Center Is Getting a Makeover with a New Set... 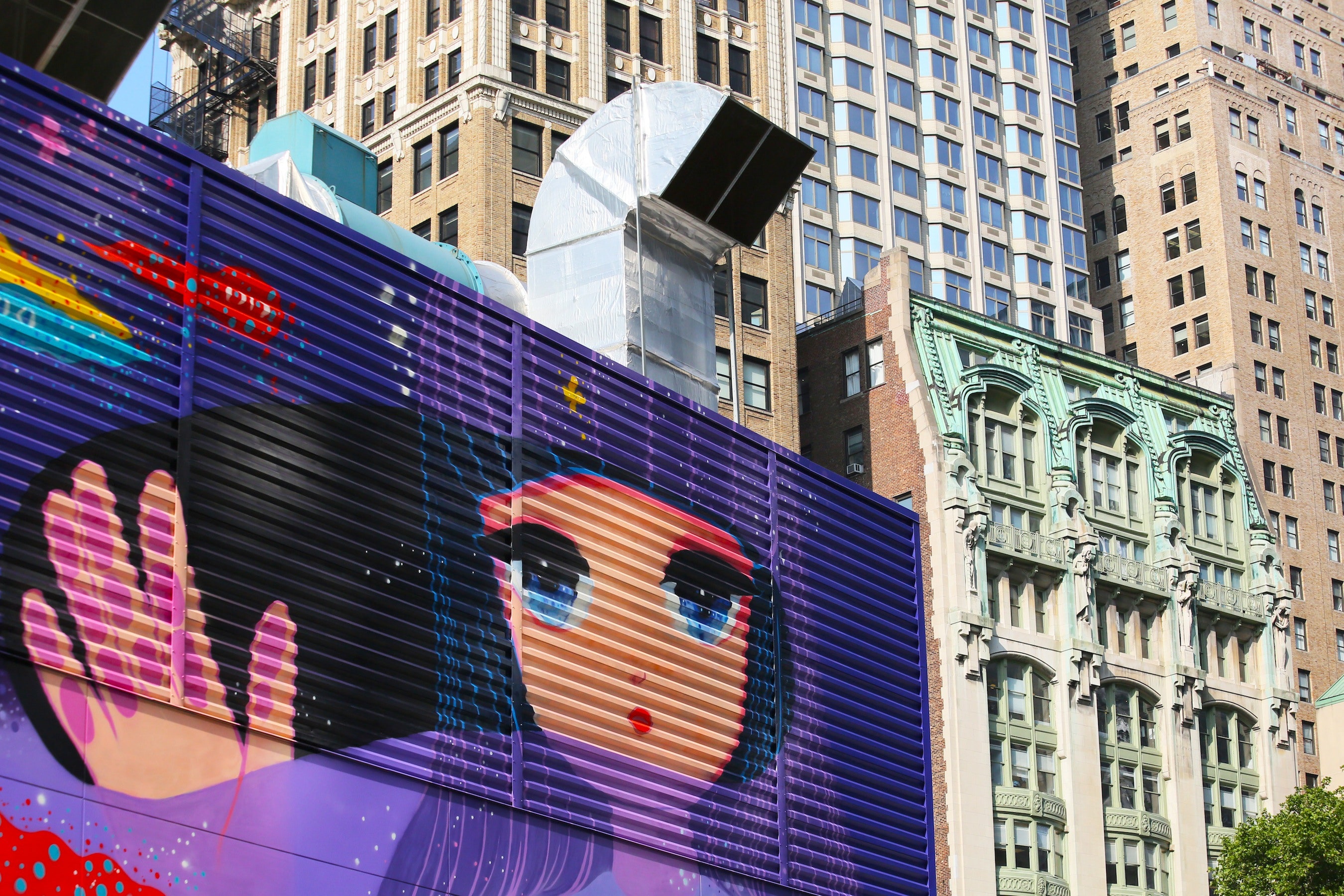 Manhattan's financial district isn't widely known for being particularly beautiful—many parts of it remain a messy construction site—but it's getting a bit brighter thanks to a new crop of vibrant murals at the World Trade Center. Organized by Silverstein Properties in partnership with the Port Authority of New York and New Jersey, the mural project is an interpretation of sorts of a similar venture by Silverstein a few years back, where they invited street artists to take over an office floor at 4 World Trade. "It was a private office space, so unfortunately we couldn't bring the public up to see the work. But these are street artists, and their work deserves to be seen by as many people as possible," said Doug Smith, owner of World Trade Gallery and curator of the mural project.

To brighten up the space, Smith called upon artists Todd Gray, Hektad, BoogieRez, Stickymonger, and husband-and-wife duo Chinon Maria and Sebastian Mitre to leave their mark on the World Trade Center's campus . Three World Trade Center opens next week, and in anticipation, Silverstein Properties realized that the large metal structure that houses the building's cooling and operating equipment was something of an eyesore, but also, an opportunity. Soon, the artists from around the world were laying down tarp, climbing aboard scissor lifts, and splashing the structure with color and personality.

On any given day, take a walk around the World Trade Center's campus and you are destined to hear a symphony of languages and dialects from around the world. It's an iconic location, perhaps poignantly, that is visited by throngs of tourists every day who come to pay tribute to those who lost their lives on 9/11, so there is a major opportunity, not only for the artists, but for the memorial as well. "The vibe that I'm getting from all of the executives I'm meeting is that there's a desire for this place not to be so mournful. They want it to be like a phoenix rising of some sort," said artist Todd Gray during a break from painting on a recent sunny day. His mural pays homage to such Pop Art icons as Andy Warhol and Roy Lichtenstein, modeled off of one of his recent sculptures. "I'm out here every day in pure gratitude. It's a fabulous opportunity and an extraordinarily humbling experience," he said.

"When I arrived, I went over to the memorial pools to check it out, and there were people crying and sad. I thought, Wow, I have to do something that brings love here," said Hektad, another one of the artists whose work was chosen to transform the structure. His piece is simple—a black backdrop with the word Love written in delicate script repeatedly—but moving. It's been up for only a handful of days, and yet he's already received an outpouring of messages on Instagram from people that said they visited the memorial and felt sad, but came upon his mural and felt uplifted and happy again. "I paint for the people, I don't paint for myself," explains Hektad. "It's not that I'm in love, or I'm looking for love, it's for the people that are in love, and want love, that are feeling sad, and need something to cheer them up."

While the project is already impacting the area, it's also casting a brighter glow around the artists. To paint murals that will soon spread like wildfire through social media, at one of the most visited locations in the world, is the kind of game-changing opportunity many creatives dream of. But, in addition to boosting their profiles, Smith and Dara McQuillan, CMO for Silverstein Properties, hope that the project will have an impact on the art world. "It's a great template for people in the arts to think outside of the box," says Smith. "There are museums that set a fee and no longer accept donations, making them more inaccessible to the greater public than before. This is the opposite of that. This is several groups in New York City coming together and saying, 'Here's art for the world to enjoy.'"

RELATED: The 8 Most Powerful Works of Public Art in the World

MSI to Reveal New Products and Top 5 Trends at the...