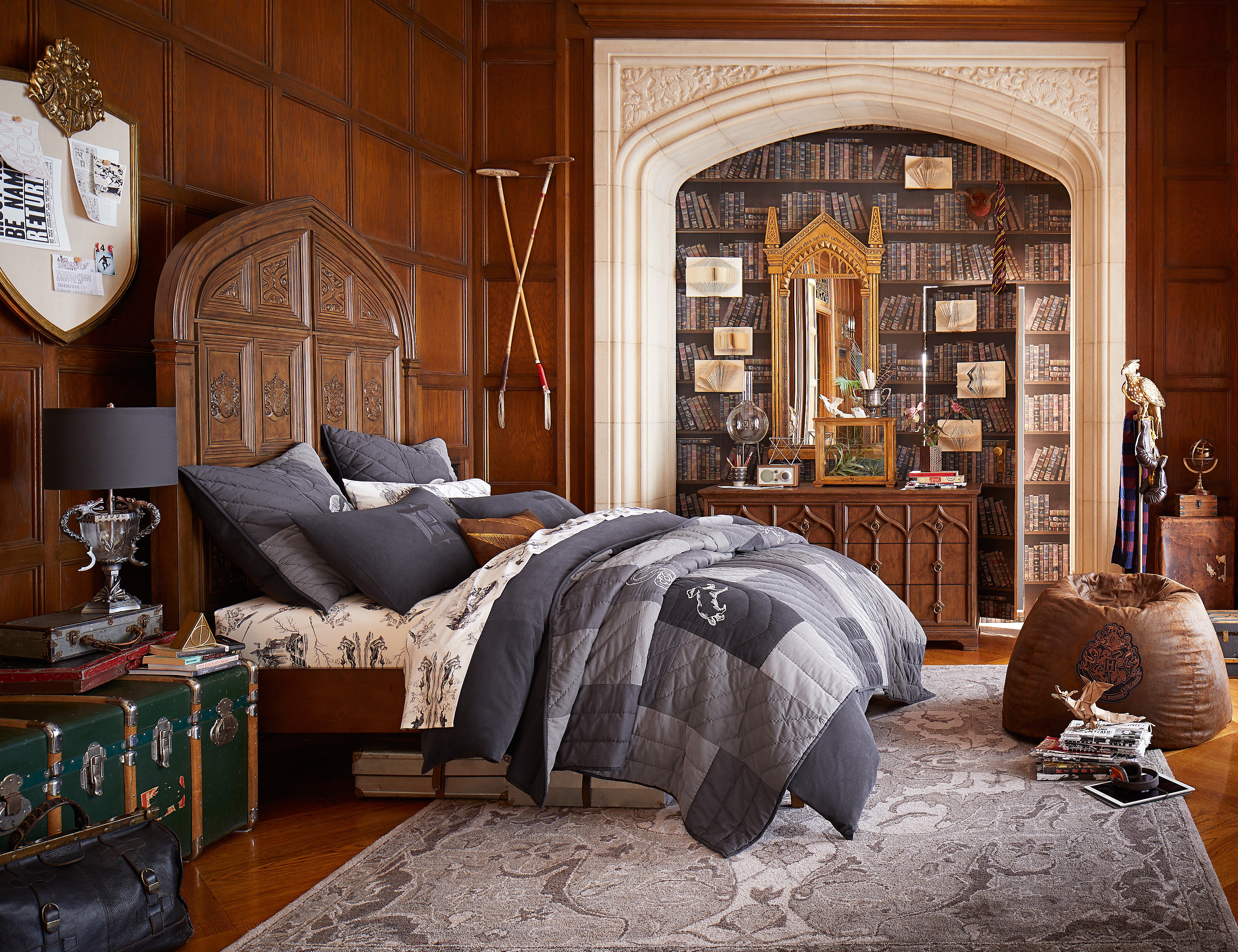 Accio, Harry Potter–themed interior decoration! There’s a new collection for the home, thanks to a collaboration between Pottery Barn brands and Warner Bros., out this month and available now. “The magical world first established in J.K. Rowling’s Harry Potter books, and brought to the screen in the Warner Bros. Pictures films, continues to engage fans looking for ways to extend the storytelling through their own creativity,” Soo Koo, Warner Bros. Consumer Products’ chief creative officer, shared with Architectural Digest. “Our new collections from Pottery Barn, Pottery Barn Kids, and PBteen reimagine the stories and characters made popular in the Harry Potter films, allowing fans to transform their space with a lifestyle approach in a modern way.” Along with wallpaper, a brass lamp, bean bags, tumblers, and even a bed, the collection also has coasters, a tablecloth, and a variety of other things for the home and beyond.

The new collection—which is available with or without access to Diagon Alley—is certain to charm muggles and wizards alike, especially as it was directly inspired, like everything else under the Wizarding World brand, by J.K. Rowling’s singular imagination. And, so, with the wave of a wand (or, well, the click of a mouse), J.K. Rowling’s world can be introduced at home as of this month.

GOLDEN SNITCH TASK LAMP ($159): This brass-like item is a Quidditch seeker’s dream: a snitch-themed bulb with an extra shimmer. This “catch”—which has been fashioned from aluminum and iron—is sure to award its owner 150 points for taste.

HOGWARTS EXPRESS TRAIN BED ($1,999): Dream aboard the Hogwarts Express—or, well, aboard a bed that resembles the Hogwarts Express, at least. This black “cabin” is decorated with crimson accents and two drawers, which can house accessories and clothes (like a Christmas sweater from Molly Weasley, perhaps?).

HOUSE CREST BEAN BAGS ($209): Now we, too, can decorate our homes like one of the common rooms at Hogwarts School of Witchcraft and Wizardry. These canvas-covered seats have been embellished with the crests from the four houses: Gryffindor, Hufflepuff, Ravenclaw, and Slytherin.

HOUSE CREST TUMBLERS ($48): A drink is more festive in one of these tumblers—whether it’s a Butterbeer or a “muggle” cocktail. At parties, choose the Gryffindor-themed one for the bravest imbiber (and the Ravenclaw one for the smartest).

HARD-SIDED LUGGAGE BUNDLE ($399): Start the new term—or, even, travel to Egypt to see Bill Weasley—with this trunklike set that includes a 22-inch suitcase and a 28-inch suitcase. There’s extra room, which means there’s no reason for an extension charm.

Related: Behind the Scenes of the Wizarding World of Harry Potter