Home News This Luxury Lodge Was Built in One of the Most Remote Places... 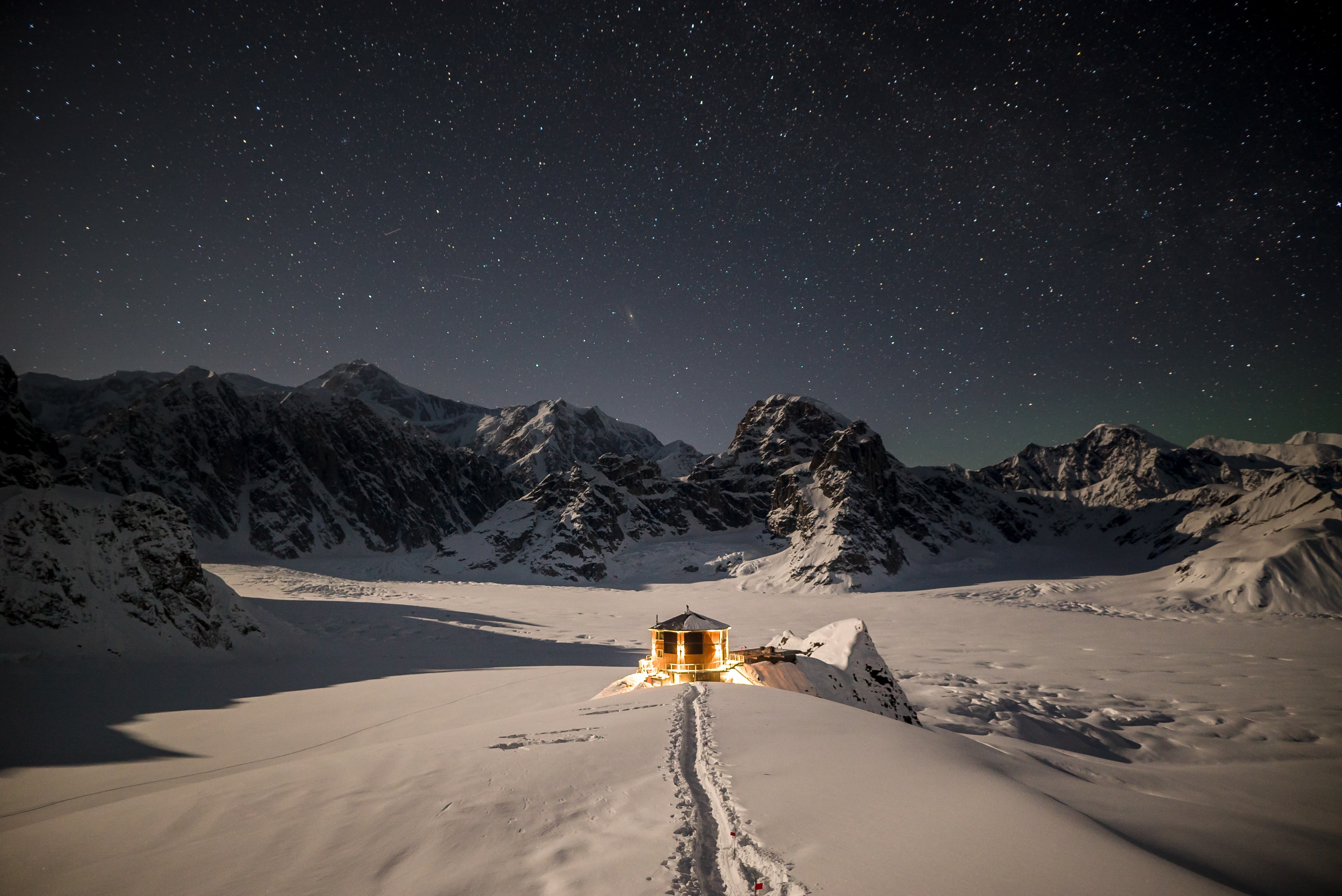 There’s a reason Alaska is known as the last frontier: A good portion of it is wild, untamed beauty. And it’s that precise thing that draws humans to it. The Sheldon family is no stranger to Alaskan nature, with the late patriarch Don Sheldon making a name for himself as one of the best Alaskan bush pilots in history, pioneering the technique of landing planes on glaciers in order to reach its most inaccessible corners. It seems fitting, then, that his children, Robert and Kate, have opened one of the most remote guesthouses on earth, the Sheldon Chalet, located on a rocky pinnacle known as a nunatak in the Don Sheldon Amphitheater in the shadow of Denali. The eponymous Sheldon acquired the land in the 1950s under a subsection of the Homestead Act dealing with trade and manufacturing sites, claiming just under five acres of pristine Alaskan wilderness to be used for business—a vacation spot, to be exact. Though the land couldn’t be accessed via the ground, thanks to the Great Gorge, one of the deepest canyons on earth, and a glacial icefall with thousand-foot-deep crevasses, Don’s piloting skills would allow guests to be flown to the property. But by the time he passed away from cancer in 1975, his plans had not been fully realized, with only a small cabin, known as the Historic Mountain House, being built on the site. Following the passing of Don’s wife, Roberta, in 2014, his children inherited the land.

“Kate and I got to talking about how we vaguely recollected some articles about the Historic Mountain House and some old family brochures that showed additional planned structures for the land,” Robert Sheldon tells AD. He and Kate intended to finish their father’s project, building a permanent structure for visitors on the nunatak, and they started designing it from scratch. “We were about 35 percent done with the design concept of the new chalet when my wife and I discovered my dad’s 1968 blueprints for a second structure in the family warehouse,” says Sheldon, who had no idea his father had gone so far as to design the structure. “It was dumbfounding—when Kate and I put the new floor plan next to the one from 1968, it was pretty much congruent!”

Robert and Kate ended up combining the old plans with the new to design the current Sheldon Chalet, a five-bedroom luxury guesthouse. But designing for such harsh conditions—at 63 degrees north latitude and 5,755 feet in elevation, temperature swings could be more than 100 degrees over the course of the season, with hurricane force winds lashing the structure during storms—was not a simple task. The Sheldons partnered with architect Tom Jaleski and subcontractor BEK Alaska to engineer the chalet, with the Sheldon’s friend Hank Swan overseeing the logistics of the construction site.

Being that there’s no ground route to the chalet, all the materials for the project had to be flown in, either on de Havilland Otter and Beaver planes or on helicopters. Planes were the preferred method of choice, as they’re more affordable, but they have space and weight constraints. As Sheldon jokes, “The FAA frowns upon strapping materials onto the outside of the plane.” So larger materials that couldn’t fit within the confines of a plane fuselage had to be hung from a sling and helicoptered in. Then there was the matter of the site—construction materials had to be stored on the limited surface area of the hard rock, not in the snow beneath the nunatak, meaning only what was being used in the very near future could be stored there. “Everything had to be highly coordinated. It was the dance of all dances,” says Sheldon. And there was the weather to contend with, too, with hazardous storms being a major threat to the site. Luckily, however, during the three years of construction, the Sheldons were gifted unusually calm skies.

The foundation, of course, was the first step of the build. During the summer of 2015, crews first headed up to the site to begin the pour, and they discovered quite a surprise: insulated floorboards and joists, indicating that the senior Sheldon had started building the chalet back in the ’60s. “We had no idea that our father had begun the project,” says Sheldon. “It was really quite remarkable to see that. I salvaged as much of that wood as we could and repurposed it inside the chalet.” After preserving the materials, engineers began the process of inserting rods directly into the nunatak to stabilize the structure (and have it hold up against Category 5 hurricane winds). To the construction crew’s surprise, the rock was incredibly strong, thanks to its composition of 25 percent titanium iron oxide, and the vast majority of the rods were able to hold 54,000 pounds rather than their expected 36,000 pounds. Then, concrete fortified with special fibers for arctic environments was poured onto the site over the course of a couple years.

When it came to going vertical, many of the components of the chalet were actually built off-site, either in Anchorage or Sheldon’s home base of Talkeetna, then disassembled to a degree to be flown to the nunatak. During this part of the build, which mainly took place over one season, a crew of up to 26 people—including Sheldon’s three sons—camped out at the site. As for the interiors, Sheldon went with a minimalist lodge aesthetic with exposed wood and a neutral palette, choosing to highlight the incredible views of the amphitheater and Denali as the focal points.

Today, the two-story Sheldon Chalet and its five-acre plot are an enclave within the confines of Denali National Park, offering unbeatable views of the namesake mountain that no other accommodation can. “We get guests into places where you once could only go if you were an experienced mountaineer willing to risk your life,” says Sheldon. “This is an experience like no other.” sheldonchalet.com

RELATED: 11 Stunning Hotels You Can Only Reach by Helicopter or Float Plane