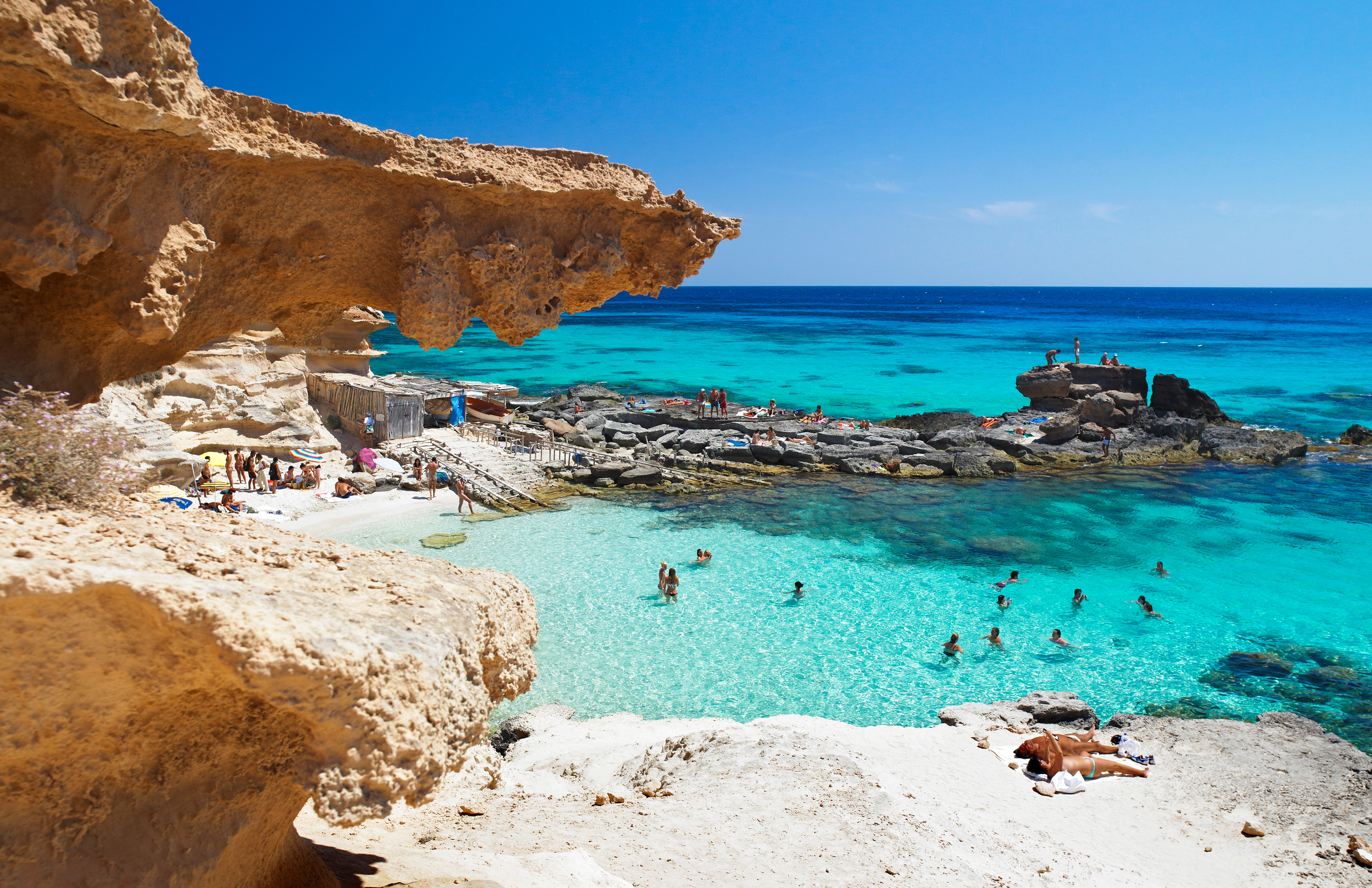 When Phoebe Sung and Peter Buer, the design duo behind Brooklyn’s Cold Picnic (arbiters of the boob design trend, and serious couple goals) chose Formentera, an under-the-radar Spanish island, for their honeymoon, we perked up—when they devoted their latest collection to said island, we packed our bags. Phoebe and Peter’s new series of hand-tufted rugs and quilts, called “Take me back to Formentera,” gathers memories of their bicycle trip around Formentera, one of the Balearic Islands, just 12 miles long and 30 minutes by ferry from Ibiza—here are the island’s best secrets, and tips from the spellbound designers.

A 1960s hideaway for legends like Jimi Hendrix and Bob Marley, and a longtime favorite of Italians—and their chefs—the island’s white-sand shores and whitewashed towns are mostly home to day-tripping crowds, craggy cliffs, and pine forest (but not without hints of luxury). Resisting the mega-resorts of Ibiza, Formentera is pleasantly and intentionally underdeveloped, meaning that coasts are clear and the boutiques are precious.

“There are a few small resorts, though nothing that feels intrusive,” says Phoebe. Tourist-friendly outposts cluster around the northern port, but to really check out, check into one of the boutiques along the southern shore. “Head to Platja de Migjorn for a wilder, more remote take on the island,” says Phoebe.

Gecko Hotel & Beach Club, the island’s hot-ticket booking, is nonetheless laid-back after a midcentury-meets-Mediterranean refresh by designer Antonio Obrador. Right on Platja de Migjorn, the 30-room hotel, awash in cobalt blues and neutral furnishing, recalls the island’s natural palette alongside 1950s nostalgia. Key suites are upgraded with chic daybeds and private plunge pools, and while the main activity is yoga, a soft focus always lands on the beach.

“We stayed at Hotel Casbah Formentera, which is in the middle of a pine grove and right on the beach,” says Peter. “You have to take a series of dirt roads to get there, and it felt like a private villa oasis.” If the private villa experience is paramount, Es Ram, even further down the coast, has a clutch of six secluded villas surrounded by pine forest near the cliffs of La Mola—for celebrity types, the resort stresses confidentiality.

Beach shacks, cafes, tapas—the island’s main eateries are casual affairs, and thanks to a cache of transplanted chefs, there’s variety (and more than a few boldfaced names). You’ll find the latter right next to La Savina, the port, where day-trippers from Ibiza ebb and flow. Opened by Antonio D’Angelo (once the personal chef of Giorgio Armani), Molo 47 serves fabulously fussy ingredients in a breezy setting—expect Japanese and Italian riffs, like nimble ravioli stuffed with wagyu beef. Nearby, Can Carlitos may have pedigree (opened by Nandu Jubany, a Michelin-starred chef) but serves playful tapas and pitchers of sangria right on the beach (plan to share the lobster paella).

Phoebe and Peter recommend Formenterra’s local, family-run joints as well, like El Gioviale Cafe—the kind with a single chalkboard menu. Depending on the day, expect anything from burrata to cacio e pepe and fresh mushroom pasta, all served outside under a trellis of trailing plants. The pair’s favorite meal—which inspired their Midnight Dinner rug—was at Restaurante Sa Platgeta, a seafood chiringuito on Platja de Migjorn. “The decor isn’t much, just plastic tables in the sand, but who cares when you’re right on the beach?” says Phoebe. “We had a simple dinner of garlic shrimp, a delicious chopped squid dish our waiter told us was a Formentera specialty, and a platter of grilled seafood.” The waiter drops off a bottle of Hierbas, a local digestif made with aniseed, herbs, and other plants from the island—you can pour as much as you like.

There’s little rush in Formentera besides the breeze—less pressure to do anything besides a little bit of nothing (lazing from one beach to the next). But there’s much to see throughout the island, and Phoebe and Peter recommend seeing it all on a bike. “All across the island there are both bike lanes and green paths,” says Peter. “Each town is maybe a 10 or 20 minute ride away from the next.”

For that matter, Cold Picnic’s collection is like a roadmap of highlights. From the Ferry, for example, captures Formentera at first glance: from the top deck of the ferry from Ibiza. “It took about 30 minutes, and you could see Formentera nearly the entire time—all the white buildings and bright blue water,” says Phoebe. Out of the island’s landmarks, ride to Cap de Barbaria at the southwestern tip of the island. “There’s a lighthouse, and next to it a little hole in the ground with a ladder sticking out of it,” says Peter. “You can climb down the ladder into a cave which opens into a view of the water from off the cliffs.”

Formentera is full of these “secret” pockets, although, according to Peter, it’s the island itself that feels secret. “Just south of the port La Savina, on the way down to one of our favorite beaches, Playa de Ses Illetes, there were these incredible pink beaches—neither of us had ever seen anything like it,” says Peter. “We found out later they were actually salt pans, also called salt flats, a name we liked better for a rug.”

In Sant Francesc Xavier, the tiny capital, shops are frequently quaint and small—expect outdoor markets and tiny boutiques with handmade ceramics and quilts. Phoebe recommends Parfumerie Centrale, where the owner crafts all of the scents herself. “The scent I got is called Higo, which means ‘fig’ in Spanish, but it’s not sweet,” says Phoebe. “It smells very light and fresh, perfect for summer vacation.”

Find fresh figs and cheeses at the Sant Francesc Market (closed on Sundays), and for even more flavor, drop into Iemanya, a hippie market layered with eclectic finds. “There are handmade quilts in the entrance and you had to take off your shoes before entering,” says Phoebe. “And lots of pretty jewelry—I got a little moonstone ring.”

The island’s highest point, El Pilar de la Mola, is home to an actual outdoor “Hippie Market,” which is worth the trek up the mountain mostly as an excuse to see the view. “We didn’t think we’d make it all the way up, it was so steep and winding,” says Phoebe. “My favorite was a jeweler, Gennaro Pepe, who crafts everything out of glass which is somehow unbreakable—I got a few clear glass rings that look like they’re made of ice.”

The Commission on Accreditation for Law Enforcement Agencies…