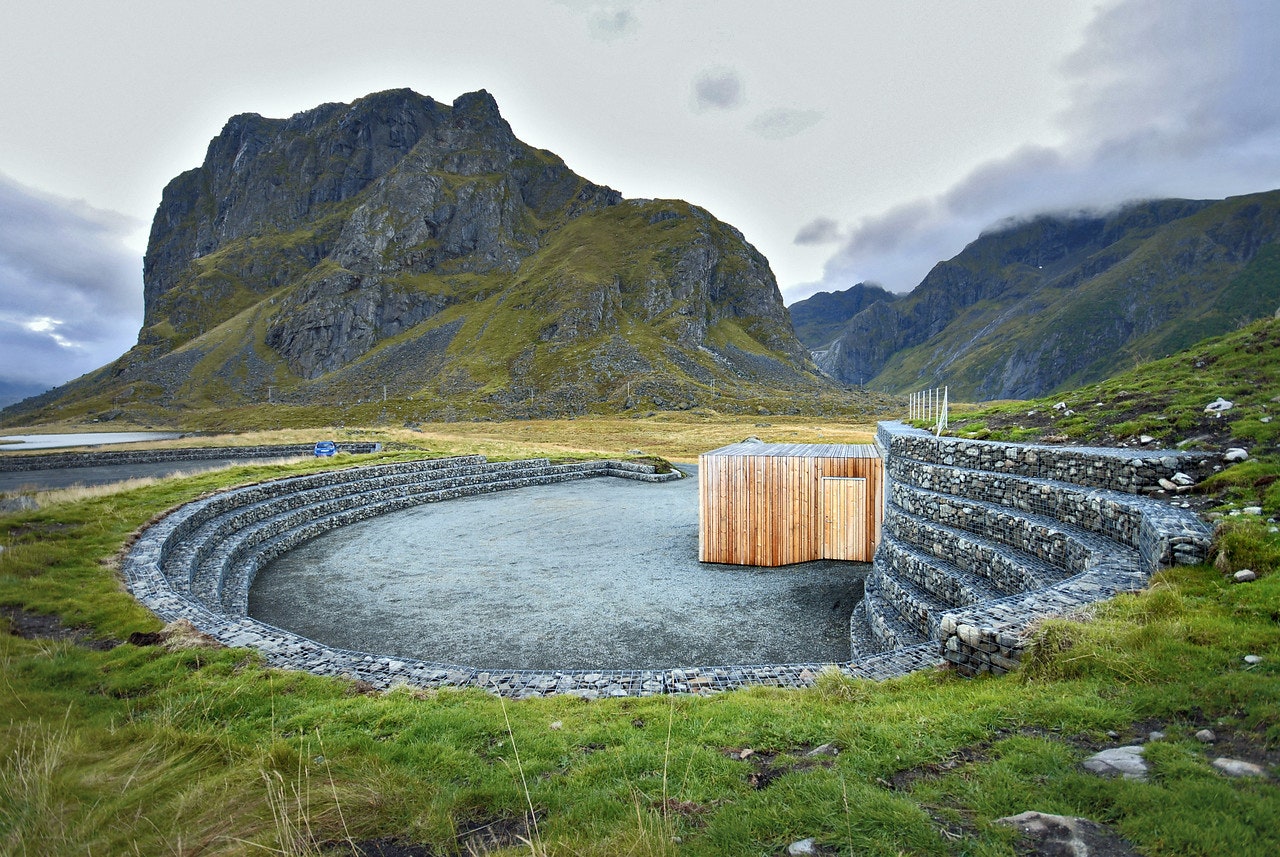 Northern Norway, the Norwegian region occupying the top third part of the country, encompasses the counties of Nordland, Troms, and Finnmark. The region stretches from just south of the Arctic Circle—which it crosses at Saltfjellet in Nordland—through the dramatic Lofoten Islands and city of Tromsø, to the northernmost part of continental Europe. With wild landscapes dotted with soaring mountains and deep fjords, nature plays a large part in visitors’ experiences, particularly light: summer nights are short and bright while long, dark winter nights bring the magical colors of the Northern Lights.

Despite its far-flung location and sparse population, Northern Norway also offers some excellent travel experiences for design lovers. With noteworthy architectural works spread throughout the region that are inspired by everything from the indigenous Sámi people’s traditionally nomadic way of life to centuries-old fishing practices still practiced today, the twisting movements of the Northern Lights and the dark history of Finnmark’s 17th-century witchcraft trials, design in Northern Norway finds endless inspiration in its history and nature.

The landscape may be wild, but in Northern Norway you’re never far from sleek digs. In Nordland, the Arctic Hideaway offers the ultimate retreat on the tiny island of Fleinvær, an hour’s boat journey south from Bodø on the mainland. Conceived by jazz musician and composer Håvard Lund and designed by TYIN Tegnestue and Rintala Eggertsson, the eco-friendly retreat is made up of 10 sustainable timber-clad cabins, raised on angled steel feet to minimize impact on the landscape. The buildings include five sleeping houses, a sauna off the pier, and a tower house intended as a place for thinking and letting creativity flow.

Still in Nordland, it’s a 1.5-hour boat journey north of Bodø to polar explorer Børge Ousland’s adventure resort, Manshausen, where four larch- and glass-clad sea cabins jut out from the coastline—three are cantilevered over the stone moorings above the water, and the the fourth is set on a rocky ledge at an angle to the coastline. Designed by Stinessen Arkitektur, Manshausen opened in 2015 and was a four-time winner at the 2016 Architizer A+Awards.

Feel the call of the wild in the county of Troms, where Wolf Lodge has the unique appeal of sitting inside a wolf enclosure. From the cozy interior of the farmhouse-inspired luxury lodge, watch gray wolves roam across Polar Park, the world’s northernmost animal sanctuary, then, accompanied by your private guide, get outside and meet them for yourself. Don’t worry: They are accustomed to human contact.

Cuddlier cousins of the wolf, 50 sledding huskies, are the main draw of Engholm Husky Design Lodge, outside Karasjök in Finnmark county. The rustic design here features materials from nearby mountains and forests, such as pine heartwood log walls, turf roofs, and chunky timber tables. Meals, served at a communal table, are also locally sourced, often featuring elk, reindeer, trout, herbs from the garden, and, in summer, cloudberries from the plateau.

Shaped by the bounty of some of the world’s richest seas, as well as the forests and mountains, the cuisine in northern Norway is some of the country’s best. In Bodø, a stone’s throw from the DRDH Architects–designed cultural center Stormen, Restaurant NYT offers four- to seven-course tasting menus inspired by the region’s nature and traditions. Dishes might include cod’s tongue, reindeer with boletus, monk-made Monkeby cheese with arctic raspberry, and sea buckthorn with vanilla.

Over in Lofoten, on the island of Svinøya, Børsen Spiseri occupies a mid-19th-century quayside warehouse with wooden floors and exposed beams. The restaurant specializes in stockfish (dried cod), sourced on the island. Try it in the bacalao, a tomato-based stew whose name—and use of chili and garlic—reveals the influence of Spanish sailors upon the tastes of these northern islands.

In Tromsø, cozy Bardus Bar & Bistro—dimly lit, with stuffed bookcase-lined walls—evokes the ambiance of the classic bistros of continental Europe. Almost everything on the menu here is sourced locally, from the pan-fried boknafisk (semi-dried fish) and cured reindeer, to the bar’s signature Arctic Seaweed Cocktail.

The light-filled 36-seat dining room of Emmas Drømmekjøkken (“Emma’s Dream Kitchen”) is an inviting setting for unpretentious traditional food with a hint of a global, specifically French, influence. Try the signature whitefish, shrimp, and macaroni gratin served with a rich béchamel sauce. Can’t get a table? Head downstairs to the street-level Emmas Under.

In Alta, the nature and seasons of Finnmark inspire Trasti & Trine’s tasting menus. Dishes are likely to include fish from the nearby fjord, reindeer from the mountain plateau, bread straight from the stone oven, and sweet berries from the forest behind the building. All the better for refueling after one of the resort’s dogsledding adventures.

People in the north—especially the indigenous Sámi—have for centuries lived off the land and in harmony with nature. And so it’s natural that traditional elements and those inspired by the landscape inform contemporary architectural practices.

Anywhere along Northern Norway’s coastline, you’ll come across fiskehjell, long wooden racks, often pyramid shaped, upon which thousands of pairs of cod are hung to dry in the ocean air. This simple, ubiquitous structure provides apparently endless inspiration for contemporary architects. See its influence in Svart—an in-progress Snøhetta-designed hotel expected to open in Nordland in 2021—and in what is possibly the region’s biggest draw for art and design enthusiasts, the Steilneset Memorial.

A collaboration between architect Peter Zumthor and the late artist Louise Bourgeois, the Steilneset Memorial honors the victims of Finnmark’s 17th-century witch trials. It is located on the small island of Vardø on what is thought to be the very site where 91 people were tried then burned at the stake for witchcraft. Visitors walk through Zumthor’s long oak-floored hall—reading court notes about each of the victims printed on silk and hung next to a lightbulb—toward Bourgeois’s sculpture, a smoked glass box housing a burning chair named “The Damned, the Possessed, and the Beloved.”

The Steilneset Memorial is on the 100-mile-long Scenic Route Varanger, one of Norway's network of 18 designated National Scenic Routes. The network has both an architecture and art council, which oversee more than 200 installations along the routes. In Northern Norway, those include a rest stop by Snøhetta, a viewing platform by Code Arkitektur, and sleek bird-watching hides by Biotope.

Artscape Nordland is a project initiated 25 years ago with the intent to compensate for the lack of art museums in Nordland. It consists of 33 location-specific sculptures in 32 of the county’s municipalities, which form a kind of treasure trail throughout the varied landscapes of Nordland. Don’t miss Dan Graham’s concave transparent mirror that reflects the surrounding mountains in Lofoten, and Tony Cragg’s granite sculpture by the pier in Bodø.

Designed by Stein Halvorsen and Christian Sundby, the Samediggi (Sámi Parliament of Norway) is a striking semicircular two-story building in Karasjök, Finnmark. Elements related to the traditionally nomadic Sámi people's way of life inspired its design, such as the lavvu, a traditional Sámi shelter similar in appearance to a Native American tipi.

Two cathedrals merit inclusion on a design lover’s Norwegian itinerary. A daring piece of architecture by Jan Inge Hovigand, the Arctic Cathedral is a Tromsø landmark thanks to its distinctive pyramid shape, again reminiscent of the region’s fiskehjeller or, perhaps, the lavvu. SHL, the Danish firm behind the Aros Museum of Art in Aarhus, collaborated with Link Arkitektur on the Northern Lights Cathedral in Alta, Finnmark. The cathedral’s spiral shape is inspired by the twisting of the aurora borealis, and its titanium exterior reflects those lights as they dance across the sky—proof again that appreciating wild nature and contemporary design need not be mutually exclusive activities on a trip to northern Norway.

Explore polycarbonate plastic architecture via our new Pinterest board