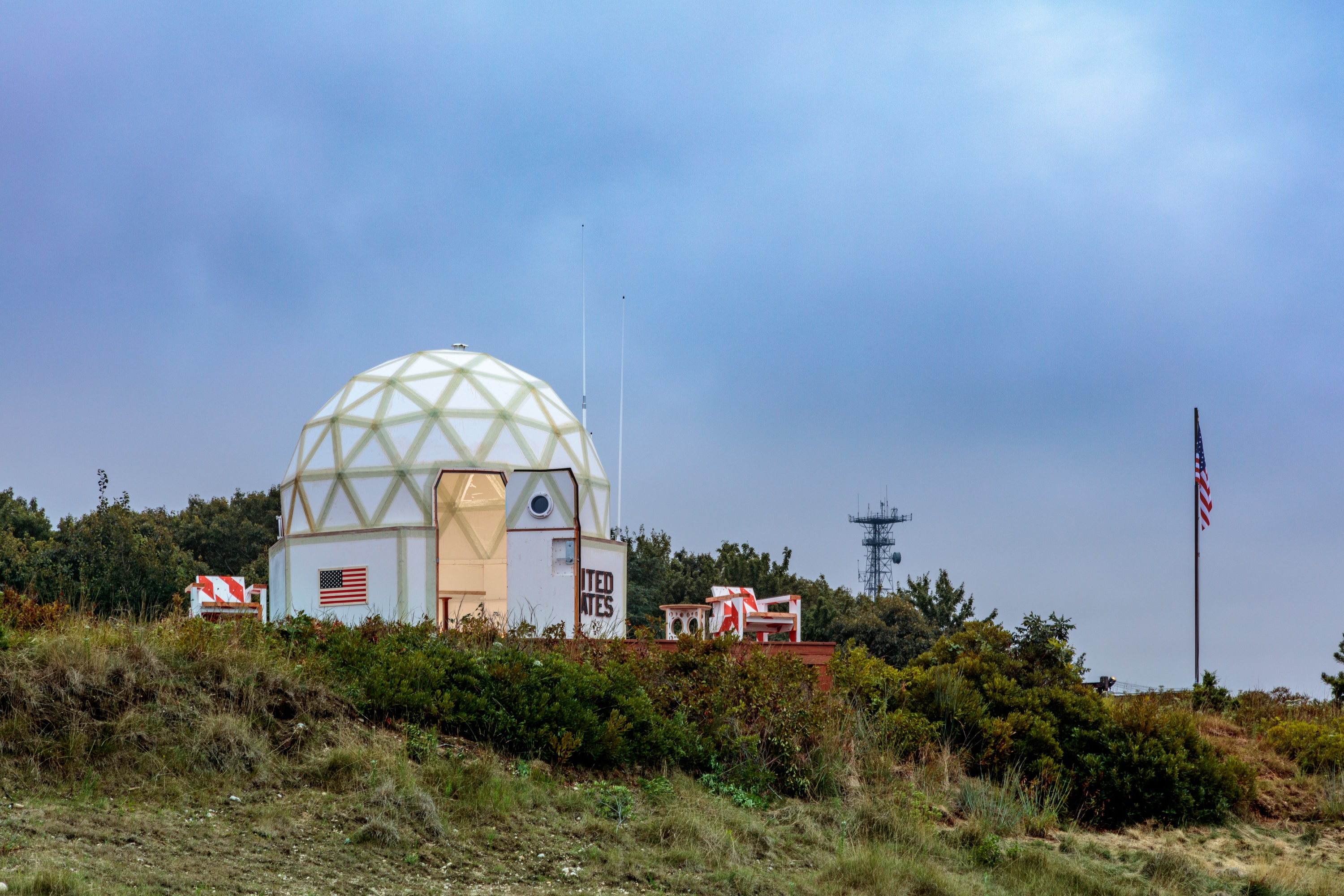 "Building 3 is currently perched like an alien craft on a sandy links-style hillock above the 18th hole of a Hamptons golf club for gazillionaires, with a stunning view of Noyack Bay and unimaginable entitlement," writes Dakin Hart, senior curator at the Noguchi Museum, in an essay on artist Tom Sachs's latest work, titled Building #3. Indeed, Sachs's otherworldly, spacecraft-like sculpture is currently stationed in the dunes of Bridgehampton, though its next touchdown point remains unknown. Once the piece finishes its run in the Hamptons, it will likely enter into a private collection—or a backyard.

Building #3 is petite—think of an above-ground bunker or the tiny homes trend, though this space comes only with select amenities. Sachs imagined it as an escape, a space designed to transport you anywhere your mind desires, despite being firmly planted on land. As Hart put it, "If you could spend six figures on a space for what is known in Mexico as domingueando (Sundaying): hanging around, drinking, listening to music, making out, doing nothing, would you?" The good news is that you can: The habitable sculpture is available for sale through New York's Vito Schnabel gallery, at an asking price of $525,000.

Sachs has outfitted the space with expected amenities like a bed, a library, and air-conditioning to make it livable, while also incorporating luxury details including a Chanel makeup station, a Japanese tearoom, iPhone-compatible speakers, and a wet bar. The interiors are predominantly clad in shades of white; left unfinished in a raw state with revealed wood and sealant, which is one of the artist's signatures—he prefers to show his process. The liquor bottles and Chanel cosmetics are labeled hastily with masking tape and black marker; below the vanity is a trash can whose "Thank You" brings to mind McDonald's trash cans, while the front door looks as though it had been removed from NASA's Apollo spacecraft.

Many of these icons—the luxury labels, the high/low contrast, the orange-and-white striped tape, the nod to McDonald's, the Japanese tearoom, and especially the NASA references—are repeated artifacts and themes found often in Sachs's work. He reproduces these ideas frequently in various iterations, refinishing and re-perfecting them, though nothing ever seems to be complete.

Living full-time in Building #3 poses a few challenges, though it could serve well as a guest cottage or a secret hideaway. But that all depends on your decorating style—as Hart cautions, "Inside it's as efficiently space-planned as the Apollo Command Module, if the planning had been done by someone in the business of pimping limos for Wall Street traders and hip-hop producers."

If living in this minute structure, or perhaps having it as a guesthouse for your Hamptons home eveny, is of interest, act fast: This past weekend, at the third annual The Bridge by Richard Mille, a fair of sorts that unites cars and contemporary art held on the site where Building #3 is located, the structure procured a significant amount of interest. And perhaps, a new owner?

How 24 French Hotels Earned a Rating Even More Luxurious Than Five Stars |...